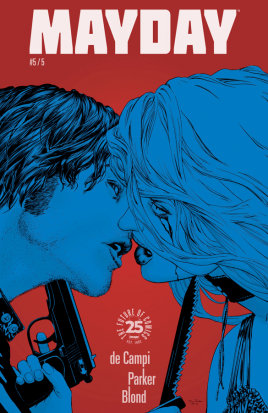 Ah, all good things must come to an end, and the end of Mayday is here. The mini series was the highlight of my monthly comics reading and was a top-notch story for the entire run. I’m eager to re-read the entire series as a whole, sure to find some nuggets I may have missed in my first go-round.

Writer Alex de Campi’s period spy piece really captured the feel of the early 1970s, propelled in no small part by what she did outside of telling the actual story: her personally curated soundtrack and the music and film recommendations she made in her end “Notes” section. She thinks cinematically, and she also probably thinks some things that would make the average person lose sleep at night. While Mayday was not as out of control bug-four-letter-word crazy as some of de Campi’s other offerings (Archie vs. Predator) she still packed plenty of action and intensity in each issue. And knife assaults. Felix loves him some up close knife kills.

Artist Tony Parker’s visuals captured de Campi’s chaotic tale with much sangfroid. Most of issue #5 takes place during a smoke bomb filled riot, and Parker and colorist Blond use shadows and canted angles to produce a dizzying, disorienting effect. Parker shows that he can convey much with little, specifically in two pages of Felix drifting at sea, leading to a double page splash where he encounters a surfacing sub. Now re-read those pages while listening to the Red Army Choir’s “Varchavianka.” Now you get it!

Are the adventures of Codename: Felix and Codename: Rose over? Mayday started off with Rose being the more perceptive and deceptive of the spy duo, but considering she wasn’t able to deliver the coveted microfilm, it would seem the KGB will likely “disappear” her. Felix turns out to be more resourceful than my initial impression of him. He was able to secret said microfilm in his mouth and the issue ends with a teaser for a future Felix story.

Spies, double-crossing, and the above-mentioned knife kills…do yourself a favor and pick up Mayday. So whether it be for “The Brandenburg School for Boys” or any other story, next time de Campi puts pen to paper I’m buying it. 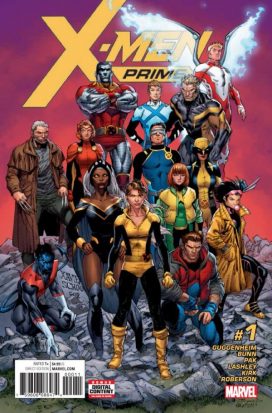 I write this on a Sunday, and in the background episode six hundred and something of The Simpsons provides noise. The X-Men now are like The Simpsons are to me now. I loved both in the 90’s, and in some weird way they helped shape me into who I am. As time went on I lost touch with them, occasional brilliant bursts led to long stretches of forgettable storylines and downright awful runs. Now I read reviews online of both, there’s not enough time in the day to waste on mediocre Simpsons episodes, or mediocre X-Men comics like X-Men Prime #1. It’s a good thing comic books take about ten minutes to read these days, because I only wasted twenty minutes reading this comic twice for this review.

This issue is mainly a place setter for all of the spinoff X-Men series to come. Kitty Pryde is the main character, and this issue positions her as the new leader, on a level with Scott, Ororo and Logan at least, even Professor X. It’s a great choice, as Kitty is a great character that we’ve seen grow up in the X-Men, and has evolved from the naive Sprite into a powerful, compassionate and pragmatic adult mutant with a deep soul. Over the years she’s become one of my favorite X-Men.

Like later seasons of The Simpsons, something seems off about Kitty and the other main characters though. Hopefully this will be course corrected in the upcoming spinoff series but for now we’ve got familiar images with no soul, going through the motions. Storm is about to throw in the towel, until she isn’t. Colossus had a non-creepy reason for moving into Kitty’s old room, until he doesn’t. Wolverine is on the team, except it isn’t the Wolverine we know. In fact the X-Men Blue team is a whole team of characters like this, alternate dimensions and time travel being the excuse not to simply let some of these characters like Logan, Jean and Scott remain dead.

In other words, there’s some hints that things could be good, I’m interested in X–Men Gold #1, but overall I could care less about most of the other X-Men comics coming out. Generation X could be interesting, especially if they focus on developing Jubilee and some of the various mutant students. But X–Men Blue just seems pointless, I still don’t get why the original teen X-Men are floating around. And the Weapon X series just seems like a rehash of the excellent Uncanny X-Force series.

I want to be excited for the new direction of X-Men comic books, but this did not stimulate that interest much, or really feel necessary to read on its own. The art is nice, and there are a couple of nice character moments between Kitty and Ororo.

At the end of the day though this feels like a placeholder until the next big shake up. Somebody major or not quite major dies, and convoluted plot points involving alternate timelines and characters from those places, who don’t quite add up to the originals, who act like later season Simpsons characters. They deliver their lines, but there doesn’t seem to be any character and soul left inside.