The Witness was one of last year’s most talked about games. After years of hype and a slow trickle of new information, the title, from famed creator Johnathan Blow, finally released to critical acclaim, snagging many game of the year awards and earning a place in the puzzler pantheon.

I never got a chance to play The Witness in 2016; I was too caught up in wooing Maru in Stardew Valley and playing a really shitty Zarya in Overwatch. But it was always on my radar, looming like a monolith of intrigue with promises of mind-bending puzzles and social commentary. So when last week’s awesome Humble Bundle came around, I jumped at the chance.

I was immediately drawn in by the world of The Witness. The sense of isolation and foreboding was palpable, and I felt immersed in a story larger than myself. The colorful art style, the design of the architecture, the ambient noise of footsteps – all these elements combine into a very pleasant world.

And then there were puzzles.

I consider myself a fan of puzzle games. Hell, Portal 2 is probably one of my favorite games of all time. But I just couldn’t hang with The Witness. The puzzles spike in difficulty very quickly, which is not something I would normally condemn. But the way The Witness rewards progress goes against everything I have come to want out of a puzzle game.

There is no reward for completing a difficult series of puzzles except another series of puzzles. With most games, there’s a sort of reward loop that reinforces your progress, but whenever I open up a door in The Witness, I’m greeted with more dumb line puzzles, which is exactly what I don’t want to see after spending half an hour on the last five line puzzles.

And that’s the thing. I don’t know if I’m actually more of an idiot than I realized, but I just couldn’t wrap my head around some of these puzzles. The Witness cleverly uses the environment to give hints about puzzle solutions, but my stubborn child of a brain refused to process some of the more obscure scenarios. 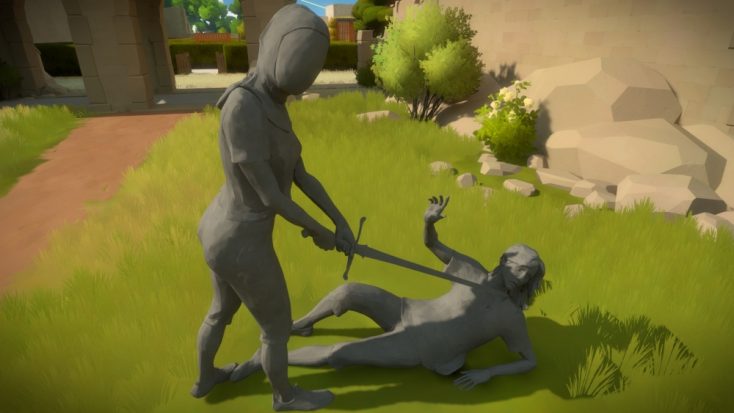 Another qualm I have is that The Witness feels so bogged down by an odd sense of self-righteousness that it can’t see anything past its own nose. The island is littered with stone statues that all represent some form of commentary or thinly-veiled symbolism of some shit that I don’t care to parse because who cares they all lead to more fucking puzzles anyways.

Look, there’s no denying the pedigree of Johnathan Blow. I mean, Braid was a triumph of design that helped put indie games on the map, but The Witness just feels more like bloated high-art, jam poetry nonsense than the elegant puzzler it could have been.

And that might be your bag, which is fine. Dozens of game of the year awards can’t be wrong. But my patience for it is awfully thin. As I entered fourth or fifth hour with The Witness, I had reached my limit. Puzzle after puzzle had me feeling like an idiot, and the thinly veiled commentary was quickly wearing out its welcome. I threw my hands up, mumbled a quick “fuck this,” and closed Steam.

I may return to The Witness sometime in the future. Maybe then I’ll find the drive to keep solving those puzzles. But at this point, that island could hold the secret to everlasting life and I wouldn’t care.

Breath of the Wild is Great But Inaccessible