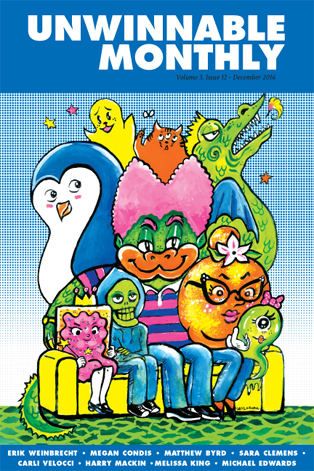 Every month in Battle Jacket, long time hesher Casey Lynch searches for the heaviest, thrashiest and all around best metal albums of the month. This column is a reprint from Unwinnable Monthly #86, the Family issue. If you like what you see, grab the magazine for less than ten dollars, or subscribe and get all future magazines for half price.

2016 can go to hell. Terrible year pretty much all around.

It has, however, been a pretty decent year for metal. This month we’re looking back at the very best metal albums of 2016, but first let’s celebrate two excellent end-of-the-year releases you won’t want to miss.

Listen now to the Unwinnable Best of Metal 2016 Playlist

The 6-piece prog metal act’s debut full length traces style lines between genre heroes The Human Abstract and Between the Buried and Me (no wonder they attracted guitarist savant Martin Andres AKA Pomegranate Tiger). Oh, and they have a freakin’ xylosynth player.

This upstart quartet from Long Island, NY, crashed into 2016 with one of the freshest longplayer debuts of the year. The 12 tracks tear through metal, blues, thrash, punk, world, soul, groove, poly/djent, math and more – sometimes in the same song. Having spent most of this year on the road, expect great things from Moon Tooth in 2017 and beyond.

Third-wave blackgazers Astronoid are here to prove that metal can mix your typical blast beats and tortured guitars with impossibly uplifting vocal melodies more evocative of Mew than Gorgoroth. If ever there was such a thing as uplifting, dreamy metal, this is it.

Khemmis isn’t your average bongmetal act and Hunted gets better with each listen, as it deftly combines stoner doom signifiers with Chevelle-esque sensibilities. There’s a rich depth to the booming crush of riffs and the contrasting clean vocals, giving Khemmis their own refreshingly familiar sound.

There is so much happening on this record, it’s experimental, noisy, and melodic; it’s huge, it’s breathless, it’s desperate. It’s even beautiful. I just don’t even. This sounds like a firework show looks.

Classic 70s-80s-ish metal riffs (and an organ!) combine forces to mete out weirdo progressions and “what-the-?” vocal harmonies in a smart, fresh, and particularly unexpected way.

Since their last release in 2010 (the EP Priest), this New Jersey quintet has gone from straight ahead deathcore to proggy Kempercore, and largely traded its slashed screams for lots of cleaner (and quite nice) vocals. Yeah, it’s pretty rad.

With exotic arrangements and haunting female vocals, Gramarye sounds like the music you’d hear in an occult temple lost somewhere in the celestial planes of outer space.

Meshuggah – The Violent Sleep of Reason

4 years since their last record Koloss, and the pioneers of polyriffery sound as huge, uncontrived, and brutal as ever. Recorded live, these 10 tracks prove that once again these Swedes are totally uninterested in any current trends in metal.

Rising – Oceans into their Graves

This Danish 5-piece is E. Honda heavy and just as melodic, combining the aggressive groove of Red Fang with the harmonic power of Anciients and the sheer heft of Relapse-era Mastodon, all driven by surprisingly tempered yet powerful vocals from singer Morten Grønnegaard.

The prodigy and former Chelsea Grin guitarist’s solo debut is nothing short of an explosion of some of the most state of the art guitar work this year.  It almost sounds inhuman, Richardson is that good.

Like a mix of Chevelle, I Prevail and Batter the Drag, the remnant of As I Lay Dying have carried on since vocalist Tim Lambesis’ arrest. Honor is Dead is marked by stellar production and equal parts catchy and heavy, it improves on their 2014 self-titled debut in nearly every way.

After 2013’s Volition, these progressive Canuck shredders adopted a brand new subscription model and released one new song per month on Bandcamp. Pacific Myth represents the final official release of those songs as a full album, and it’s a doozy.