I recently moved back to New York after a fifteen-month retreat to Colorado. And just like last time, the move’s come with a whole host of recommended reading. A friend from a publishing program in England insisted on Bright Lights, Big City. After all, wasn’t I moving to the Rotten Apple to make it as an editor? Another lobbied for Ragtime, insistent that it captured the spirit of the city like no other novel. One well-intentioned but off-the-mark professor even pushed for Sophie’s Choice; what thematic overlap he found in my life and in that of a guilt-wracked Holocaust survivor, I cannot know.

Fine choices, certainly, but if put in their place I could recommend no book to the big city hopeful more highly than Blood Blockade Battlefront. It’s not so literary as all those other suggestions, no: creator Yasuhiro Nightow’s vision of NYC is unabashedly pulp and cartoonishly violent. A bizarre realm called “The Beyond” has overlapped with Manhattan, creating the city Hellsalem’s Lot and ushering in a host of horrors, gods, elder vampires, eldritch abominations and other sundry swarms of squamous, wriggling alien life. Only the efforts of a secret-society of superheroes known as Libra keep the madness from boiling over to consume the rest of the world.  Even then, they can just barely contain the chaos; leading man Leonard Watch (appropriately named, given he’s a photojournalist whose one special ability is a pair of eyes that can see anything) can’t cross a city block without witnessing a megalithic alien smash into a skyscraper, a hostage crisis perpetrated by a demonic mafioso or a thirty-car pile-up.

The art is fit to match. The same sketchy linework that made Nightow’s Trigun one of the most dynamic action comics around works here to render everything in the city a blur. The character designs owe more to American superhero artists like Todd McFarland and John Romita Jr. than to any other manga artist. Through this hopelessly exaggerated portrayal, Nightow gets at the true character of the city and what it’s like to live there in a way no other work I’ve read or watched has. Far from some well ordered literary tableau arranged with meaning and significance, New York City is a kind of barely contained chaos bursting with wild energy and implicit violence. 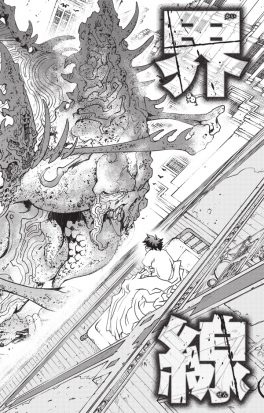 No two days feel the same; nothing is predictable. At least, it often enough feels that way when you’ve just arrived and realized that you’re only one more tiny, tiny fish in a pond overflowing with sharks, barracudas and a million piranhas. How much more powerful everybody seems initially, how much more capable and put-together and adult and strange they all look; how much more they deserve to be there! Amongst that, it’s entirely too easy to end up feeling like Leonard, one observer at the mercy of a city that seems beyond ordering or sense.

What it also gets, though, is that the other side of fear is exhilaration. Like the world that greets Leonard, what at first seems an impossible terror is just opportunity by another name; it’s all a matter of staking your claim. That tutoring gig might be legitimate, or it might be a bizarre front for what you’re certain is a human trafficking scheme; the nut on the subway gibbering about his “alternative Jewish histories” website might be your new best friend. He might also be, well, just a nut. That’s the magic of it. The uncertainty is a thrill ride every bit as bizarre and joyous as the one Blood Blockade Battlefront presents.

Flavor Text Is The Spice of Videogames