This article is a reprint from Unwinnable Monthly #80, the Kid Adventure issue! If you like what you see, grab the magazine for less than ten dollars, or subscribe and get all future magazines for half price.

On May 26, Kotaku news editor Jason Schreier reported that the procedurally generated survival adventure game, No Man’s Sky from Hello Games would be delayed. Thus, the yearning masses cried. Not long after the release of the news article, Schrier posted this tweet.

Sean Murray, the game’s creator and founder of Hello Games also acknowledged, albeit with brevity, the death threats he had been receiving since the news broke.

Death threats have long been used as a form of social control, a way for a person or group of people to try and exert power over an individual or situation they find disagreeable. The internet makes threats of violence more easily distributed and increase the likelihood of the negative bystander effect, but it doesn’t mean these threats are new. Threats of violence have been a part of participatory culture for a long time. They aren’t unique to a specific time period; look to any spectator sport, political contest or soap opera for examples.

PARTICIPATORY CULTURE: “A participatory culture is a culture with relatively low barriers to artistic expression and civic engagement, strong support for creating and sharing creations, and some type of informal mentorship whereby experienced participants pass along knowledge to novices.”

The recent string of death threats around the delay of No Man’s Sky had me thinking about the way fans interact with their fandom of choice and the tension that often belies it.

In 2007, I was, by all accounts, a big a fan of the then-junior Senator from the state of Illinois, Barack Obama. I was so much a fan that when the call went out to participate in Camp Obama, an intensive in field organizing, I eagerly submitted my name and resume. At the close of that week, campaign strategist and manager David Plouffe came to speak to the small room of field hopefuls. He told us about the candidate Barack Obama. This, I inferred, was different from the private individual Barack Obama.

Candidate Obama had an allure. Part of that allure was that he didn’t have years in Washington under his belt. He wasn’t marred by scandal, pork legislation or decades of the wheeling and dealing like other politicians. That, Plouffe claimed, was a blessing and a curse. Plouffe then described Obama sitting atop a white horse. White horses tend to show dirt quickly. The point of the metaphor was to illustrate the ease of which Obama’s image could be marred, mucked up or tarnished. To give us a sense of the work that lay ahead.

Videogame communities can’t help but place people, studios, games genres, you name it, on white horses. The entire cycle of games production, marketing and release schedules almost necessitate a meteoric build up of The Brand New Thing. And when the people behind these products inevitably prove they are fallible, in the way every human is, there is shock, dismay, anger and betrayal.

Political candidates spend billions of dollars over decades to build up and maintain their image. Over time, they learn to embody the hopes and aspirations of voters while preserving a unique identity. Many games studios partake in similar endeavors. They must capture the passion of millions while promising to deliver something different, something new. Game studios (if they can afford to) do what any brand (or politician) does: they employ strategists, marketing personnel, public relations firms – people who understand what it means to craft and maintain a public image.

Over the course of months, if not years, information about The Brand New Thing is rolled out in incremental packages. Press releases are sent to outlets. Online forums and social media accounts are created and lead by company community managers. Fans, after getting a first hint of The Brand New Thing, flock to these company owned forums to consume and be a part of the information funnel. In a knowledge-based society, information is power. We use it as currency to purchase social favor in online communities. Who will be the first to make the video about The Brand New Thing? This person is also the one who tends to reap the most social benefits.

Fans of these games don’t simply participate in communities in order to increase their social standing but also in an effort to place this Brand New Thing within the context of their pre-existing fan lives. These rituals of fandom, the creation of zines, connecting The Brand New Thing to mythologies of old, have taken on a different meaning. These fan rituals are now another component of marketing, another part of the brand identity to maintain, control, exploit. 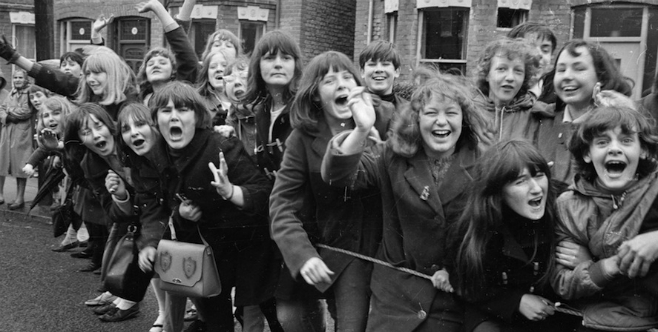 To be a fan, there is the question of consumption. Something must be consumed, a television show, a movie, a book. The act of consumption used to be a passive process. Creators would give The Brand New Thing to the people and the people would consume it and from there on the tenuous relationship between creator and fan would be cemented.

Like the poachers of old, fans operate from a position of cultureal marginality and social weakness. Like other popular readers, fans lack direct access to the means of commercial cultural production and only the most limited resources with which to influence entertainment industry’s decisions.

By all accounts that world no longer exists. Fandoms are no longer relegated to obscure Newsweek articles which detail (with a certain level of incredulousness) the life of a Trekkie, but rather they are embraced and celebrated. Each of us are able to produce and distribute media. Fans can now occupy many roles. We can be consumers, creators, producers, we become our own brands, creating value and adding to the source material. Yet the tension remains.

I may be a fan of Lord of the Rings, I may learn how to write and speak in Elvish, participate in forums and cosplay and, while I may own those individual pieces, I do not own the material which inspired these fan endeavors. In general, fandoms reject a position of passivity and perhaps nowhere is this more evident than with the explosion of User Generated Content (UGC).

We now need to accept that what we used to call cooptation also involves a complex set of negotiations during which the media industries have to change to accommodate the demands of consumers even as they seek to train consumers to behave in ways that are beneficial to their interests.

-Henry Jenkins
Fandom: Identities and Communities in a Mediated World

User Generated Content (UGC) is a nice buzzword for the labor fans have always done, created, and/or transformed. Websites, web series, TV shows, entire industries have sprung up around fandoms – they are mainstream enterprises that companies are eager to profit from.

The goal of fandom is to build, expand, understand and engage with material – to transform it into something more. When outsiders attempted to commercialize fanfiction, as FanLib did in the mid-2000s, fans spoke out, angry at the idea that others would seek to profit off of these, their gifts to fandom.

The 2007 world now seems all but forgotten thanks to the emergence of services like Twitch. User Generated Content is the tenuous agreement companies and people who own intellectual property rights have come to with fans. Scroll through an End User License Agreement and you’ll likely find a bit about User Generated Content, some text which allows studios to use USG for marketing or other promotional purposes. That’s just a portion of the unresolved tension that persists between fandoms, corporations and the legal enterprises which govern them.

User generated content indicates that fandoms are still a reaction to something, built on a foundation of consumption and commodification. True fans consume all, create and produce. Real fans are always interacting and interfacing with some company, a website, a corporation, a studio, a marketing arm. Power to the player, as long as the player is willing to give away their fan labor in exchange for a nod This fan labor, or gift labor as many others have called it, is then remade, used to fuel websites, marketing materials. Thus the cycle is complete.

To be told one is an owner is to be told one has a say in something. Fans want a stake. Fandoms are told they are special, they are told they too can have their work on an Official Channel and that’s something to strive for. At what point does the labor of fandom become just another cleverly deployed marketing technique, and does it matter?

When articles are released about a delay in The Brand New Thing, this thing that fans have already invested time or money or passion in, there is anger. That anger doesn’t excuse, and never will, threats of violence or attacks on others, but perhaps, for some, the anger arises because fans understand they are in much the same position they have always been. That ownership, the perceived stakeholder status that companies manipulate them into believing they possess, all but disappears. For a moment there is recognition that they aren’t party to the conversations or decisions that matter, at least not in the way they long to be.

Fans are still consumers. Less passive than previous decades? Sure, but still ever waiting to devour.

Crest, and the Gods of Not Knowing Very Much