Every month, Team Unwinnable puts together short lists of recommended music, books and games. These lists originally appeared in Unwinnable Monthly Seventy-Eight. If you enjoy what you read, please buy the issue or subscribe.

“Limited Teeth,” by Mike & The Melvins
“Gangs in the Garden,” by Black Moth Super Rainbow
“Senkou,” by Tokyo Ska Paradise Orchestra
“Writing on the Walls,” by Underoath
“Ordinary Life,” by Ezra Furman
“The Vision,” by YEYEY
“Karate,” by Babymetal

Lion’s Pride: The Turbulent History of New Japan Pro Wrestling, by Chris Charlton
Homesick for Another World, by Ottessa Moshfegh
Canada, by Richard Ford
Hild, by Nicola Griffith
Black Tom, by Victor Lavelle
Spelunky, by Derek Yu
The Singularity is Near, by Ray Kurzweil
The Name of the Wind, by Patrick Rothfuss
The Beatles, by Bob Spitz
Slapstick, by Kurt Vonnegut
Heat, by Bill Buford
Fooling Houdini, by Alex Stone
Blood of Elves, by Andrzej Sapkowski
Slaugherhouse-Five, by Kurt Vonnegut
Lovecraft Country, by Matt Ruff
The Walking Dead, Volumes 21-23 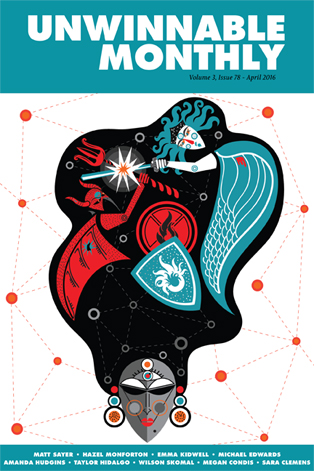 King of Dragon Pass – Stu Horvath
I missed King of Dragon Pass when it was first released in 1999. A turn-based strategy game set in Glorantha, the same fantasy world as Chaosium’s pen and paper RPG RuneQuest, the game is delightfully strange. Most of it involves managing resources and making macro-level decisions for your tribe – how to farm, who to raid, what to explore, etc. The rest is devoted to dealing with random events, the results of which are endlessly surprising. It might not sound like much, but after only a few hours, I can say it is magical. Check it out for the pick-your-own-adventure style art and if you want to play Crusader Kings II without so much complexity.

Dropsy – Declan Taggart
I’m not sure Dropsy ever properly escapes its roots in the over-worked, art-school reject idea that sad clowns are really meaningful, but, if you can ignore that, everything else about it makes it one of the most original and affecting games I’ve played in the last year.

Gotham City Imposters – James Murff
GCI is a really under-appreciated FPS. It stole a lot of what made Brink (another failed FPS) great – namely, the advanced movement options – and gave it a silly gloss. You have spring shoes, gliders, double jumping, grappling hooks, jet packs, freeze rays, Tesla guns and all sorts of other goofiness. Despite all this, it somehow feels balanced because every load-out has a lot of options, allowing you to shore up deficiencies through smart item choices. If you’re looking for a fun, quick, cartoony shooter that fits somewhere between Call of Duty and Team Fortress 2, it’s free on Steam and requires zero grinding or purchases to get what you want.

Dragon Age II – Sara Clemens
Yeah, I know I’m late to the DA:II party (see what I did there). A. Looks like Flemeth went shopping. Cute outfit, girl! B. Are there really Sebastian Vael STANs out there? Ugh, hard pass. C. How do I get my Hawke’s perfectly tousled short hair IRL?

Dragon Age: Inquisition – Amanda Hudgins
I’ve been playing this game for months. In part, this is because of how I play it. I can’t handle crafting systems. I just don’t care. Give me something to smash. Every few weeks, I have a friend come over and upgrade all the weapons and talk to the other characters. And then I go forth and smash everything and break all of the terrain.

Paragon – Jason McMaster
Paragon is a new MOBA in closed beta from Epic. It’s reminiscent of Smite but with the Unreal Engine powering some rather nice graphics. The character list is interesting. I’m a sucker for a MOBA.

Lego Star Wars III: The Clone Wars – Gavin Craig
Lego games are frequently what I play when I’m supposed to be playing something else. They’re nearly stress-free and collecting all the bits and pieces feeds my compulsive side. Still, The Clone Wars isn’t my favorite Lego game, a Lego Indiana Jones rather than a Lego Marvel Superheroes, more by-the-numbers than joyful, something to tide me over until Lego Batman 4.

Hyper Light Drifter – Harry Rabinowitz
I have only ever Kickstarted three games. Hyper Light Drifter seems to be the only one to deliver something worth while. Although I’m only an hour in, HLD is immediately mysterious, beautiful and engrossing. I’m not sure who, where or when I am, or what my purpose is. But the amazing pixel art, music, animations and wordless NPC picture-book-esque stories have me pushing forward, not so much looking for answers, but just wanting to take it all in. So far, HLD has been like a weird mix of Zelda, Samurai Jack, Metroid and Casshern Sins. If anyone knows what that last one is, color me impressed.

Trackmania Turbo – Matt Sayer
I’ve been a keen Trackmania player for years, so it’s interesting to see the changes made to position Turbo as a more accessible console game. The lack of private servers and customization options is disappointing, but the core racing is as frenetic as ever. Here’s hoping they support it by listening to player feedback.

Star Wars: Galaxy of Heroes – Erik Weinbrecht
Yes, it’s a freemium game; yes, it’s mobile; yes, I spend untold hours on it. Say what you will about this evil platform, but I don’t pay a cent in real-life dollars and I have a blast playing. They’ll soon be introducing raids and guilds which will only make it more addicting/fun.

Dark Souls 3 – Casey Lynch
DS3 is a love letter to purists, mostly for folks looking for the best of Demon’s Souls and Dark Souls, with some touches of Bloodborne appearing in strange and unexpected ways. If there’s one over-arching thing I’d say about it without giving much away, it’s that the game is noticeably tougher than you might expect, even for a Souls game. Then it ramps up and gets tougher still.

Castlevania: Symphony of the Night – Michael Edwards
I just recently purchased this on sale off the Playstation Network and have been consumed yet again in the game that started the Metroidvania craze for better or worse in the late 90’s. What I’ve always loved about this game is the depth and detail dedicated to Dracula’s castle, as well as numerous Easter eggs for fans of the series and of fantasy in general. Not only that, but it found a way to bring back the sidescroller, keeping alive my favorite videogame playing perspective. Long live the night, and long live Symphony of the Night!

Spacejacked – Jose Cardoso
With clean animations, a snappy chiptune soundtrack and charming quirks, Spacejacked’s creators clearly had fun developing it, as the concept of a tower defense-platformer hybrid set in a multi-room spaceship is executed gracefully. It’s intuitive to bounce around rooms with quick gravity changes and to teleport between spaces, as is not having to process detailed menus for turret placement. Along with balancing different turret costs, blaster upgrades and core terminal repairs, there’s a strategic layer of conserving ammo and understanding the dynamics of specific stations. The mechanics, while not deep, are satisfying in their uncomplicated nature. Flexible, too, as you can easily dismantle and swap turrets without penalty.

That freedom, coupled with unhampered flow, gives Spacejacked attractive elasticity. Even down to the finer aspects – like hopping slug enemies that spew bubble shields – it’s a comfortably smooth experience guided by a well-cultivated system.

Office of the General Counsel – Episode One & Two

Ask Me About PWR BTTM, But Don’t Tell Mom