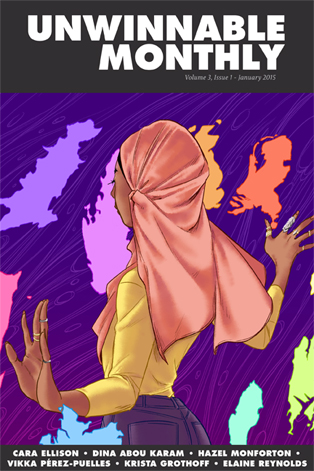 The following is a reprint from Unwinnable Monthly Issue Seventy Five. If you enjoy what you read, please consider purchasing the issue or subscribing.

Most virtual reality games are designed to be short. The headsets can be heavy, hot and uncomfortable, especially if you’re wearing glasses underneath. Simply being in a VR environment can be mentally fatiguing. All these things seem to indicate that VR will be a space for bite-sized experiences rather than full-fledged games.

Cherry Pie Games wants to defy that expectation with Emmerholt.

Emmerholt is a story driven free-roaming adventure, in which the player explores a procedurally generated world in the hopes of saving their home, the titular town of Emmerholt, from disaster. The landscape is littered with ancient relics, but is also haunted by the remnants of your previous playthroughs.

Players aren’t alone on their quest, however – they will be accompanied by their loyal steed, a horse that carries them to each destination. Building on previous games with animal companions – the horses of Shadow of the Colossus, Red Dead Redemption and The Witcher; the dogs of Fable and Fallout – Cherry Pie Games hopes to build an emotional connection between the player and their mount. This, coupled with an elaborate, motion-tracked magic system incorporating the Leap Motion controller, is the foundation of what promise to be an epic adventure in virtual reality.

Cherry Pie Games is a Florida-based independent studio of four – Christina Parker, Brandon Austin, David Berry and Trevor Swafford. Austin, Berry and Parker met as digital media business students at the University of Central Florida. Prophetically, they came together for a course project about running a hypothetical company. Their product? An original videogame called Hollow, loosely based on Washington Irving’s The Legend of Sleepy Hollow.

The semester ended with two game jams: Big Scary Jam, hosted by UCF, and the International Leap Motion 3D Jam. Hollow won best art at Big Scary and placed eighth in the Leap Motion jam. The latter event allowed the team to work closely with Leap Motion, helping them develop their official plugin for Unreal Engine 4. Ultimately, Hollow was the first game built in UE4 for the Leap.

Emmerholt is a return to the magical, low-poly world of Hollow, designed with the hope of creating an immersive string of interconnected short experiences that will draw player back, again and again.

“We hope our players will be thinking about the game even when they aren’t playing, trying to figure out the story ahead of time or how to complete their next obstacle,” explains Parker.

Christina Parker was kind enough to take the time to answer more of our questions about Emmerholt and VR.

Emmerholt is being designed ground up for virtual reality. That’s pretty uncharted territory – how are you going about it? What are the challenges you face?

We’re trying to be optimistic when it comes to designing for VR. Because it is uncharted territory, that means we are the Louis & Clarks here, we’re forging a path for others and, hopefully, we’ll do a good job of it. We’ve developed several smaller projects for VR, so we have a good amount of technical experience but, like most VR games out there, they’re only several minutes of gameplay.

Emmerholt will be 5+ hours of content. This presents a problem because wearing a VR headset can be laborious. We have designed Emmerholt with that fact in mind, so our game feels like many small VR experiences all within the same universe and important to the overarching storyline.

From what I have seen, the game is very beautiful. I love the low-polygon aesthetic. What has influenced the game’s visual design?

We love the low poly aesthetic, too! We wanted to create a feeling and mode when you’re playing the game, not try to emulate real life. We use temperature of colors, scale and lighting to inspire strong feelings. This is a page out of Walt Disney’s book and we were highly influenced by rides like Haunted Mansion.

What other games and media have you drawn on for inspiration?

As I said, we have drawn inspiration from Disney’s Haunted Mansion ride, as well as The Legend of Sleepy Hollow, by Washington Irving, and the game Majora’s Mask.

Can you explain how you envision the spellcasting system and what you hope to accomplish with it? What kind of tech will that require?

We are dabbling with a few different ideas here, but here’s the basics. You’ll have a special lantern with you that has the ability to siphon magic from the environment. You do have limitations here on what you can siphon and how many spells you can have at a time. For example, you may siphon a candle or firefly and now you have the spell to cast an orb of light in front of you that can scare away things that live in the darkness, or just light your path.

We are hoping that this spell casting system helps players have more versatility with their choices in game as well as add to the game’s replayability. It doesn’t require any tech, but Leap Motion will be supported.

Horseback riding is in integral part of the game. How do you go about simulating that in VR without kinetic feedback? Does the game use visual cues to trick your brain, the way falling in VR sometimes can?

The Leap Motion hand tracking comes into play with this. You do have the visual cues of the reins and seeing your hands, but the sensation of holding your hands out in front of you and whipping them to accelerate the horse is the main component.

What’s your reaction to the Oculus price reveal? Where do you see VR in the gaming ecosystem?

I wasn’t surprised at all. There were earlier estimates that it would be $1500 or $350. As a new tech, they are going on the higher end to give themselves room to grow. As more VR is released and more Oculus devices are created, they will be better and cheaper. This is always the way with tech.

I hope VR becomes more than just a gaming accessory. I want to see it stand on its own, like a console. I believe we will get that, and within the next 3-5 years.

Why’d you choose Unreal Engine 4 to develop the game?

UE4 has all the tools we need without requiring plugins. The rendering capabilities are important for the aesthetic of our game. UE4 is just perfect for the way we work.

How is it developing a game like this in UE4? Has it posed or solved any particular challenges? Is it well suited to VR?

Developing Emmerholt in UE4 is great. We really make use of the physically based shaders by default to create very sharp shadows. Also, the indirect lighting in UE4 is nice and the particle and material systems are very robust. UE4 is very well suited to VR since it has all the major VR software development kits integrated into it, as well as Leap Motion.

How did the Unreal Dev Grant come about? How did it change things?

We got on Epic Game’s radar during the Leap Motion 3D Game Jam because we assisted Leap Motion on developing the plugin for UE4. We ultimately were the first game built in UE4 for the Leap Motion. During that time, we were working with the programmers from Leap Motion and communicating some with Unreal. We loved Hollow – the game from the Leap Motion jam – we loved the universe we created, so we decided to expand upon it with a follow-up game, Emmerholt. We quickly created a prototype and submitted it for the grant. A few months passed and we were notified we were awarded the grant!

Receiving the Unreal Dev Grant changed things for us because it meant, as a studio of four people, we could get the attention of a titan in the gaming industry. It meant they believed in us and wanted us to succeed. Having that kind of confidence in us actually boosted our own confidence, and brought with it the attention of other people in the gaming industry. Now that we have the Unreal Dev Grant, we can actually make Emmerholt real. It was just an idea we had, a dream we wanted, but now we can develop it and make it a reality.