When I first stumbled upon Laird Barron, he had three short story collections, a novel and a novella on shelves. I read them all over the course of a few months.

These books reignited my love of written horror and expanded my definition of the cosmic and weird, which had previously been walled in, Montresor-like, by Lovecraft and his followers. There’s Lovecraft in Barron, for sure, but also Jack London and Cormac McCarthy and Dashiell Hammett, too. The mix is intriguing and decidedly modern. It is full of potential, in the same way as pistol with a cocked trigger.

Because I read it all practically in one sitting, I could see how his work had changed over the years and fooled myself into believing I could intuit hints of how it might evolve in the future.

Truth is, I never saw X’s for Eyes coming.

It probably comes down to humor. Barron’s work mines a deep vein of cosmic nihilism. Sure, there are outré creatures that view humanity as amusing livestock, but it often feels like existence itself is the apex predator in Barron’s eyes. And maybe it’s just me, but I don’t expect a guy like that to be a barrel of laughs.

Not that X’s for Eyes is funny. Not ha-ha-funny, anyway. But there is a kind of mania at work in the novella. In terms of tone, I am reminded of Mark E. Rodgers Samurai Cat stories (without the parody), the bizarro humor Adult Swim, Mignola’s Amazing Screw-On Head and, mostly, the incomprehensible fight scenes of Dragon Ball Z – all yelling and explosions.

The novella follows the adventures of the two young Tooms brothers, Macbeth and Drederick. Scions of one of the most successful, innovative and wholly evil corporations in the world, the crash of a satellite puts them in the iron sights of cultists, business competitors, their own blood-thirsty family and an alien intelligence that is an H.P. Lovecraft fan.

I forgot to mention: the Tooms boys are age 14 and 12, respectively, and are already accomplished at boozing, whoring and killing. They’re like some kind of midnight reflection of the Hardy Boys or Johnny Quest and Hadji. If you ever thought The Venture Brothers needed more horror and less Star Wars references, then this is the book for you. 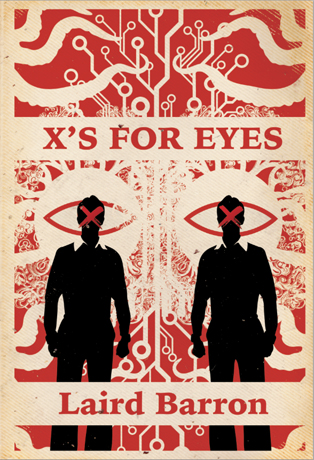 And X’s for Eyes is frightening, despite its absurdity. Death comes quick and grisly. And as ludicrous as an extra-dimensional entity being a fan of a 1920s horror writer may sound, within the context of the book, the effects such a thing has on human minds is still terrifying.

If nothing else, though, you should read X’s for Eyes for the writing. I have heard books described as breakneck, but never had such an experience before now. If other books are roller coasters, X’s for Eyes just jumps off a cliff and hopes for the best. The sentences are kinetic – they hit like a hammer with nitroglycerin smeared on the head.

I think Barron is in a transitional moment in his writing and the Tooms brothers mark an integral moment in that metamorphosis. There’s no telling what that black and malignant butterfly’s final shape may be, but if it retains even a fraction of the energy and explosiveness of X’s for Eyes, we lovers of horror will have cause to rejoice.

X’s for Eyes is out now and can be purchased at JournalStone Books. I interviewed Laird Barron way back in Issue One of the Weekly, if you’d like to learn more about his work.

We are only two more issues away from our holiday break and our relaunch as a monthly magazine. Things are coming together nicely and you know how I said I can’t wait to show you some of what we’ve got cooking for you? Well, I really can’t. A lot of the design of this issue represents where the direction for the monthly design – columns, more pictures that are bigger while being less obstructive of the text, a more rigid story-to-story template that will serve to make it all the more shocking and exciting when I decide to break it. Hope you dig it.

Speaking of – the Monthly is going to cost just $4.99. Subscribers – I have to manually change the rate of your automatically renewing subscriptions and will be doing that in early January. This being PayPal, its probably going to be a pain in the ass. I appreciate your patience while I take care of it. If you somehow get charged $7.99, please get in touch so I can fix it and refund you the difference!

Anyway. Enough about the future. Life is about the now! And now, you’ve got some reading to do. Roy Graham tries to figure out what special sauce makes Star Wars Battlefront Star Warsy.  Brendon Vance gets down and dirty with The Weeknd and Fallout 4. Paul Schumann charts the future of historical shooters by going back to World War I in BlackMill Games’ Verdun. Finally, Josh Griffiths tackles the hypocrisy of by the numbers progressive science fiction.

That’s all for me. See you next week!