I didn’t get to read anything new this week. Neither, it seems, did any of the Last Week’s Comics crew. It seems we didn’t coordinate our summer vacations very well, Dear Reader. Sorry about that.

Since I don’t have anything specific to write about this week, I want to take this opportunity to gush about how many good comics there are out on the shelves. Whether it’s DC’s new DC You books like Cyborg, Prez and Starfire or upcoming Dark Horse releases like The Paybacks or Zodiac Starforce (pre-order these books already!) or indies like Black Mask’s We Can Never Go Home, Action Lab’s Molly Danger or Rosy Press’ Fresh Romance, the sheer level of good comics out there is astounding! 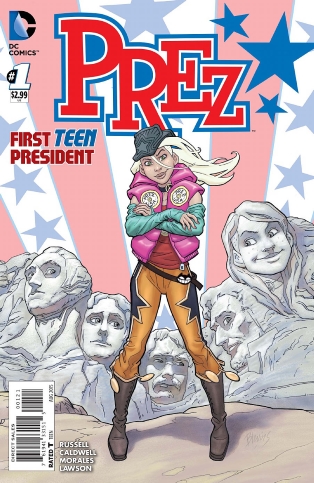 While I missed out on reading any new releases this week, I was able to dip into my backlog of unread comics and read Prez # 2. Mark Russell, Ben Caldwell and company are delivering a helluva smart political satire. It takes place in some kind of near future DCU (as evidenced solely by multiple Wayne Corp logos). I gotta say, even after the embarrassment that was Donald Trump and the GOP debate, Prez still managed to put an exclamation point on how ludicrous our political process has become. The protagonist, known as Corndog Girl, gets nominated due to a viral video in the first issue. This issue chronicles the wheeling, dealing and backstabbing that leads to her becoming the Teen President of the United States.

It’s a really smart and funny comic. I don’t want to give it away because I want you to read the damn thing!  As someone who adores the new Black Canary and Green Lantern: The Lost Army titles, Prez may be my favorite of the new DC You titles. Unfortunately, it doesn’t have the best numbers. It’s only two issues in though, so y’all don’t have an excuse.

Week in and week out I am at a loss as to what to review because so many comics are so good. I mean, sure, there are a lot clunkers out there, but the market is increasingly full of top tier work in numerous genres. It’s easy for a book like Prez to slip through the cracks, I just really hope it doesn’t!