This is a reprint of the letter from the editor in Unwinnable Weekly Issue Fifty-Two. You can buy Issue Fifty-Two individually now, or purchase a one-month subscription to make sure you never miss an issue!

I would like to take a moment to once again thank everyone who contributed to the Kickstarter last year and everyone who has subscribed since. You made this possible. You helped shepherd something weird and cool and sometimes a little beautiful into the world. The last year and a half has been a roller coaster, no doubt, but whenever I look back on this, I am sure I will do so warmly.

I do hope, if you are a Kickstarter backer, that you will keep walking with us down this road. You’ve made for great companions so far.

Speaking of the Kickstarter, we just finished our main commitment to backers – the magazine – but what about all the other stuff?

We’re working on it. I should have worked on it harder, probably, but there are only so many hours in a day, especially when you are basically a one man media company. So “I’ll get to it tomorrow” slowly but surely turned into “I’ll get to it next week” and then it slips your mind entirely.

At any rate – I am on it now. As soon as this issue goes out, I am meeting with the gang and we are going to get everything we have together, figure out what is outstanding, and get all this radness into your hands. A few things might still be a little ways down the line (Gus Mastrapa’s zines, the games from the indie game bundle), but we’re aiming to ship the core physical rewards at the end of the month. The digital stuff should be even sooner.

Thanks for being patient about that. 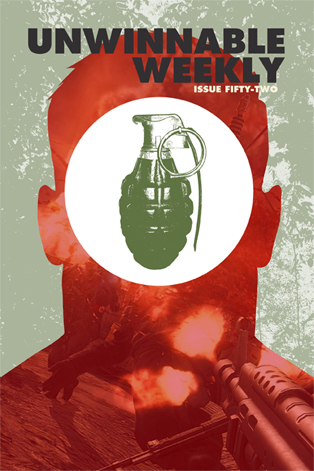 If you are a Kickstarter backer, your subscription ends with this issue (technically, it ended last issue, but since last year’s Summer Fun Issue was unnumbered, we figured you’d like to get an issue with the number 52 on the cover). If you’d like to re-subscribe, definitely use our summer discount – $2 for the first month, $7.99 every month after.

This is also the last week you can snag the Summer Videogame StoryBundle. There are a ton of great reads to be had there – you can check out my rundown from last week if you’d like to know more.

Eric Swain was nice enough to have me on the Critical Distance Confab podcast this week to gab about all things Unwinnable. That will drop next week, but in the meantime, you can listen to Eric talk to actual interesting people in the podcast archives.

Speaking of podcasts, we finally released the first episode of Eye of the Beerholder, the drunken Dungeons & Dragons-centric show I co-host with my long time pal Shawn Dillon (dig his sweet beholder illustration).  We’ve got about 6 more episodes in the can and they only get funnier. Check ‘em out!

There’s some other cool things in the hopper, too, but…well, call me a tease, but I just can’t tell you about them yet. Exciting, though.

In this week’s issue, Logan Ludwig explores the laziness of Link from the Legend of Zelda series. I wrote about my appreciation for how CD Projekt Red crafted the character of Geralt of Rivia in The Witcher 3: The Wild Hunt. Our cover story by Bryant Francis digs into the influence of the Vietnam War in Wolfenstein: The New Order. Finally, Alec Kubas-Meyer sees Thank You for Playing, the That Dragon, Cancer documentary and wonders about the art, and democratization, of videogames.