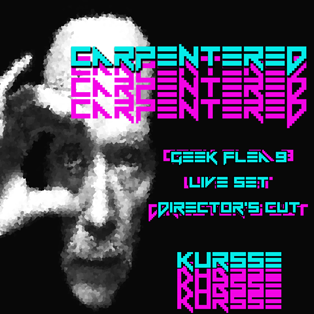 I had the chance to DJ live at Geek Flea 9. I want to say it was glorious and people who took note of what I was doing enjoyed it, but my set was plagued with technical errors like a late start, miss cues and what not. I decided after Geek Flea that I would reinvent the mix as a directors cut and as it took shape I realized that it had a theme after all: Simplicity.

Lately I’ve been preoccupied with the French electronic scene and artists like Kavinsky, ROB, Vitalic and, of course, Daft Punk. I am also forever obsessed with John Carpenter and find many of his songs and similarly influenced artists on my mixes. For the most part, they all share the ‘less is more’ approach. It’s something Carpenter is known for and has influenced electronic artists all over the globe. I thought it would be apropos to file this mix under the Soundtracks for Imaginary Movies heading as this mix can be the soundtrack to a movie like Drive or a game like Hotline Miami. I’ve also included some favorites from friends and local artists that fit the bill like Morlox, Church Fire and, shamelessly, Kursse.

I hope you enjoy listening to this as much as I did making it. Perhaps it will transport you to a time when neon ruled and synths were the back track to life.

Mad Max, Now More Than Ever