This is a reprint of the letter from the editor in Unwinnable Weekly Issue Thirty-Five – check out the excerpts at the end of the post. You can buy Issue Thirty-Five individually now, or purchase a one-month subscription to make sure you never miss an issue! 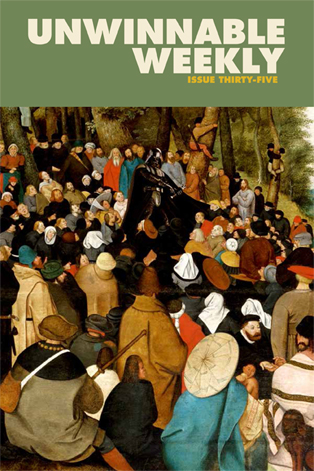 The other day, while I was shovelling yet another foot of snow off my driveway, I was thinking about independent publishing (I know, right? What a weird thing for an independent publisher to think about). Specifically, I was thinking about how many other cool little publications like Unwinnable Weekly there are out there, the ones I know and, perhaps more importantly, the ones I don’t know.

I got to thinking about which ones you might know.

My conclusion is that however many people know about Unwinnable and Five Out of Ten and Arcade Review and Haywire Magazine and First Person Scholar and the countless others…well, it isn’t nearly enough. By the very definition of what we do, we are niche and can only reach so many people. The thing is, I don’t think we should be niche. I think we should be the mainstream.

So, let’s start taking over the world.

First thing I’d like is, if you run an independent publication or site, get in touch with me. I’d like to compile an index of all of us. I will keep it updated and run it every week at the back of the new issue. And I’ll share the information back to you, if you’d like to do the same.

Second, I’m going to start giving over what amounts to ad space to indie publications for free. One whole page, front of the mag, to get my readership interested in your publication. Again, hit me up if your interested.

Third, if you don’t have a publication, check out the ones that appear in the index. Tell your friends about them. Recommend them. None of us have advertising budgets, so that means we all survive by word of mouth. It is the greatest gift you can give.

Slightly shorter issue than usual this week. I thought my essay ran longer than I expected and I figured a lot of you could use the extra time post-GDC/mid-PAX/pre-SXSW for a little bit of a nap.

Matt Marrone bids farewell to Leonard Nimoy as only Matt Marrone can: by talking about himself. I examine the notion of fandom and warn of its plethora of dangers. Gus Mastrapa rounds us out with latest installment of Dungeon Crawler, where things turn shitty.

If you need me, I am at stuhorvath@unwinnable.com. Love and kisses, y’all.

There was a time I wrote this play – it was a musical, in fact – set aboard the Starship U.S.S, Enterprise. It starred Mr. Spock. And, not only that, but I got my both of my junior AP English classes to act and sing and dance it out on the Roy C. Ketcham High School Bove Theatre stage – in front of their teachers, peers and parents. Me? I sat backstage and laughed.

“Leonard Nimoy and the Chocolate Factory,” by Matt Marrone

We often talk about how social media has created a level playing field of connection. I am increasingly suspicious of this. I think humanity, on a fundamental level, isn’t supposed to interact in such great numbers, with so few boundaries. It taxes us in ways we don’t yet understand. We rise up as rabid armies in the service of unwitting generals, and we march with the slightest provocation, razing everything in sight, like locusts, like fire.

“The Tyranny of the Fan,” by Stu Horvath