Another Monday. They just keep rolling around. This one has me full of anxiety because of a trip to Montreal tomorrow. Just the usual pre-travel nerves. “We fear change,” etc.

Anyway, wow, I love your week-without-laptop activities (thinking about your game underwater!!). Really interested in how this whole game is so connected to your day-to-day life and is providing you with all these opportunities for reflection about something outside just “games.” Keep fighting the good fight for the pseudonym, too, sounds really difficult. I’m waiting with bated, not baited, breath.

Funny to see you talking about education and so on there – I’m hyper-“educated” myself (even have a Ph.D), but it very rarely occurs to me to question how that impacts on how I speak and how I relate to making games, and so on. I like that you do that. But I think that’s a strong observation on the difference between self-taught at X and I have a degree in Y. I spend an inordinate amount of time browbeating myself about how great other people are (or appear to be) at programming and art (yourself included). Not very productive stuff, oh well. Probably a game in there? Auto-Browbeater?

This week was pretty good for progress on Jostle Parent. I settled down and just started building the world properly and now pretty much have a completed version of the Parent’s apartment, which is really gratifying. (By completed I just mean a bunch of rooms with furniture in them and Box2D bodies attached, etc.) But still, it’s a something.

The Dogville thing is coming together now that I have multiple rooms as well – with camera-follow turned on you can walk through those strange interstitial spaces between the locations that the rooms are placed on in the larger world. 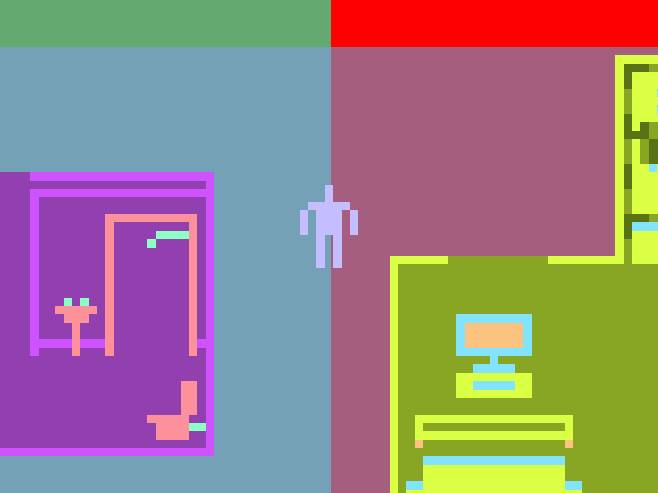 Additionally, what was once a bug became a feature when I decided to leave in the ability for furniture to overlap the top wall of a room. It creates a nice kind of off-kilter dimensionality, I think. (None of the rooms have this specifically included in their layouts, but I like the idea that if you push furniture around you’ll see the effect – as well as with the avatar itself, of course.) 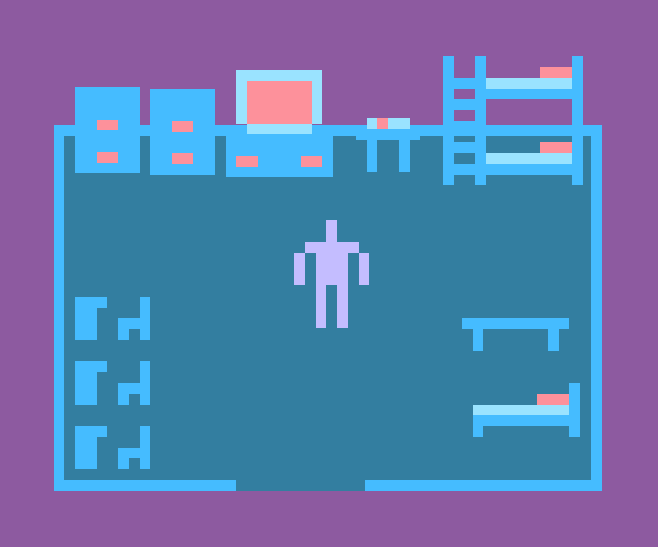 Not sure how much I’ll get done this coming week with the trip to Canada, but the idea is to start implementing the actual functional bits of the game in the apartment to see how it comes together.

Hilarious problem of the week: It’s all too possible to block yourself into a room by putting a piece of furniture in the wrong place. Not yet sure how to handle it.

Boy, I’m a bit late on my letter this week. Sorry for that. These weeks do fly by when you think too closely about it. Jeez.

I hope your Canada venture is going nicely. Travel can sometimes be so stressful in its disruption of work habits, but that’s also strangely a benefit to it – seeing how your habits could be improved when you start fresh upon return.

I like that Dogville assembly you have going on. Are you planning on designing the space between rooms, or leaving that sort of “walking through videogame space” blankness between? I can see both approaches working out, honestly. That screenshot makes me feel like I’m walking through the gaps in a montage, or like a gameplay collage space.

Yea, I really like your overlap bug. I like the subtle reveal that the boundaries of the room are not solid walls, but more like the base of where the wall meets the floor in a 3D space. I’m a fan, lest you were thinking of cutting that. As for the delightful furniture-blockage bug, that sounds amusing but solvable. Perhaps you could let the player force furniture through the doorway if it’s blocking him – a buff.

Let’s see! What’s new on my end, you implicitly ask?

My laptop is fixed, so I’m back in the game-game! I’ve been pushing longer hours on Hyper Light since we’re approaching our public Early Access release. I’m pretty excited for it! I’ve also spent some time working out the goal states in Kyoto Wild, moving away from just killing everyone into something more spatial and perhaps sport-like. Interesting stuff that I may just share here, since I’ve been spamming our thread with work from all my projects in an effort to mitigate the guilt I feel for making such little progress on Need.

Need development is going on such an unusual track for me. I have my first solid piece of content for the game, and it is, strangely, a piece of music. In a moment of panic over not having done work on the game, I ducked into a corner in our empty studio and recorded a vocal sample that was possibly one of the first things I knew I wanted to exist in the game. I planned on just doing it for practice, seeing as I recorded it on my iPhone, but I think I might keep this version. I like how low-fi it is. Despite my anxieties over releasing it now, I’m doing it anyway. So, here it is, attached! It’ll have music over it, I suppose, by the end.

That should do nicely for this week 🙂

The Angst Affairs is a weekly correspondence between game designers Pippin Barr (Jostle Bastard, The Artist is Present) and Teddy Diefenbach (Hulk Loves Fabio, Hyper Light Drifter), in which they have existential crises and discuss developing their respective games, Jostle Parent and Need. Follow them on Twitter @PippinBarr and @TeddyDief.