The world of Silent Hill 2 is defined by James Sunderland. He’s fixated on sex, so he is attacked by fetish nurses. His search for his dead wife is all he has to live for, so the roads out of town have collapsed, blocking him inside, giving him purpose.

The player is party to his subjective vision: He sees what James sees. If James’s character is reluctant to abandon his search and return home, then the player is made to feel that, too.

The beginning of the game follows James’s journey from his car, along a hillside path, down to Silent Hill proper. It’s a long and featureless opening where the player’s only role is to hold the run button and move the directional stick. Players are walking in front of the same green hill, on the same dirt road, in the same thick fog. The length of the road is emphasized by a save point, which appears halfway along it, as if to suggest this is such a long journey you might want to do it in two sittings. 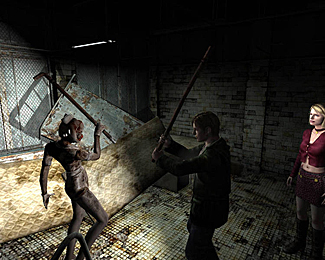 It’s boring, essentially – it’s completely the opposite of a typical videogame opening, which is loud, exciting and informs the player of basic mechanics. By the time the long walk is over, players don’t want to repeat it. The journey down to Silent Hill is protracted to the point that, even when faced with the horrors of the town, players will feel reluctant to turn about and climb back to the car. James, driven by conscience, obsessed with finding his wife, won’t go back either.

There is, ostensibly, nothing physical keeping either player or James in the town. It’s instead grim determination that pushes both forward. The opening of Silent Hill 2 unites player and character in stubborn mindedness.

It also helps to establish Silent Hill, the town, as a frightening place.

There is a scene near the beginning of The Shining where Danny is riding his tricycle around the Overlook Hotel. If you pay close attention to it, you’ll notice two things. First, he rides in a complete circuit, completing a rectangular lap around the hotel’s main relaxation area, the Colorado Lounge. Second, he rides over carpet, then laminate, then carpet, then laminate again; the sound of his wheels forms a beat.

These are patterns, consistencies. Surreptitiously, they ease viewers into relaxation. In regards to Danny’s route around the room, and the sound he makes as he goes, we feel that we can anticipate what comes next.

In a later trike scene, however, he turns a corner and comes face to face with the ghosts of the murdered Grady twins. It’s terrifying because it jolts us out of our relaxation. It breaks the pattern. Kubrick waits for us to become comfortable with a scenario and then confuses it, twists it. It’s like looking into the mirror one day and seeing your reflection, of its own accord, smile at you.

James’s walk, down the mountainside, affects the same thing. A pattern forms. The player becomes accustomed to solitude, inactivity, doing nothing except running. The music is soft. The only sounds are of James’s feet and the opening and closing of an iron gate.

Like when watching Danny cycle, the player starts to get comfortable. The hillside path runs long enough for it to feel predictable, secure. 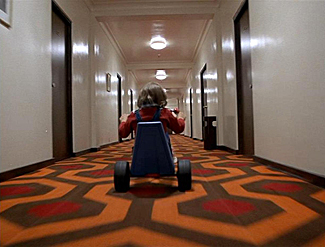 When the pattern is finally broken, by the appearance of the first enemy, it’s broken in two places.

The violent white noise produced by the radio James finds, which alerts him to nearby creatures, cuts through the silence.

The forced combat sequence, conducted at close quarters, means standing still and pressing buttons repeatedly, compared to on the path, where the player moved constantly forward while holding a single button down.

It’s a shrill, unharmonious moment, a subtle kind of jump scare. The player’s ears have gotten used to quiet, his hands to inaction. Then suddenly, they’re swinging a weapon at a monster, its moans and the sound of radio static steadily increasing in volume.

James’s walk is the perfect setup to the reveal. It’s like Danny on the trike, Dallas in the vents, Micah and Katie asleep in their bed. A pattern is formed and then broken. It drives a wedge in the player’s mind between the mountain path, which is outside Silent Hill and therefore safe, and the town proper, where the unpredictable will happen and any sense of security he has is false.