Unlike previous issues of Batman and Robin, this issue – part of a set involving Two-Face and an Irish mobster named Erin McKillen – stumbles a bit in its execution. The issue opens with the same situation with which we were left last month: Batman is trapped under a giant concrete angel (go figure!), and Harvey is going to either kill or maim Erin.

Tomasi also throws a few more villains into the mix, and this new threat detracts from the tension built in the previous issue. Plus, there’s a moment early on in the comic where Tomasi hints at Bruce having some sort of closure around Damian’s death, something that will tie the past issues together as we’ve watched Bruce carom from character to character in wake of his grief. 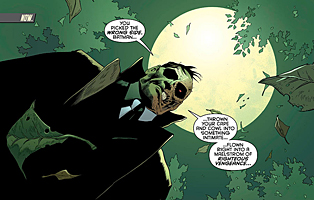 But this moment comes and goes without any major impact, and it really feels like a wasted opportunity, something Tomasi could have really hit home with had he found a better place for it. Instead, the story moves on and gives us more Bruce, Erin and Harvey teamwork.

And I don’t say this sarcastically, because Tomasi has crafted some great personal conflicts for all of his main players. At one point, he flashes back to Harvey’s early days as an attorney. The insight we get into the character detracts a bit from the usual angle of him as a foil to Bruce, standing out in public during the day, dispensing more reputable justice but succumbing to his own grief and taking his desire for fairness to an extreme. We see Harvey’s early beginnings, and how he, Bruce and Jim Gordon formed their alliance. It’s a great piece of character and one of the finest moments of the entire series.

For me, as always, Patrick Gleason is the greatest part of the issue. His art is stellar, from his grotesque Two-Face design to his gritty, vengeance-filled Batman. Mick Gray contributes fine, supple inks, and John Kalisz captures Gleason’s world in muted but tonally appropriate colors.

Batman and Robin continues to survive without Damian Wayne (much as I miss him). The latest team-up involving Two-Face makes use of a deep-rooted history while still providing new and interesting perspectives on well-known characters. I’m hard-pressed to name other books that are consistently this good. 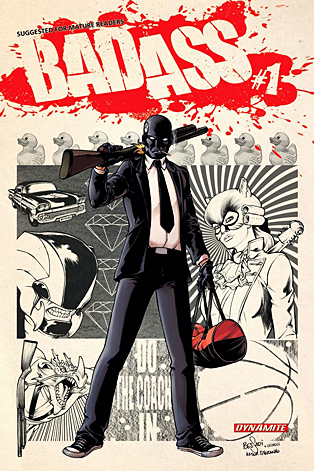 A few years ago, Mark Millar released a comic series entitled Nemesis, which he said was his take on Batman gone bad.

Bad Ass has a similar feel, except this Batman-gone-bad story is about a sarcastic, immoral fighter in a polished suit who battles hordes of ninjas, a giant lizard and has his own sexual tension with a woman dressed as a cat (except here she’s called Amadeus Kitty). And it doesn’t suck.

The opening of the book is pretty funny, actually. Its lead, an anti-hero named Dead End, is snarky enough to get a few clever lines in before he does something pretty horrific in order to show us just how immoral he really is. But the introduction serves a dual purpose, because in addition to cluing readers in on the fact that Dead End has no morals, it also shows us that he’s a pretty skilled fighter with a gift for accuracy à la Bullseye from the pages of Daredevil.

I also liked the wackiness of the story. Dead End’s whole reason for visiting with a group of ninjas during a special ceremony called the Green Spring is to ask his boss, a human-sized dragon, for a new set of wheels, as his previous car (called the Deadmobile) is damaged. When he refuses, Dead End decides to kill everyone in the room. Herik Hanna makes the action flow nicely from here, as each one of Dead End’s moves is executed with acute precision of flips, blades and blood – a nice homage to Quentin Tarantino’s Kill Bill.

The book also delves into what I assume is Dead End’s past. But with no clear indication that the awkward, pimply teen is Dead End, I get the feeling that Hanna’s leading us to believe something that isn’t true, mostly because of the humor the situation could present.

The clarity of the comic is due, really, to Bruno Bessadi’s art. His character designs are a bit cartoonish (not in a bad way), and so they highlight the comedic tone of the issue. The imagery is clean and sharp, with echoes of Mark Bagley and Stuart Immonen. Needless to say, the art is befitting for a superhero (or anti-hero) comic book.

Bad Ass #1 isn’t a bad first issue – it succeeds in making its lead interesting and the art is engaging and appealing. The only flaw, really, is its overt attempt to be a book about an anti-Batman. Amadeus Kitty is a bit over the top, but despite this one hiccup, I’d be interested to see what else Herik Hanna has in store for readers. 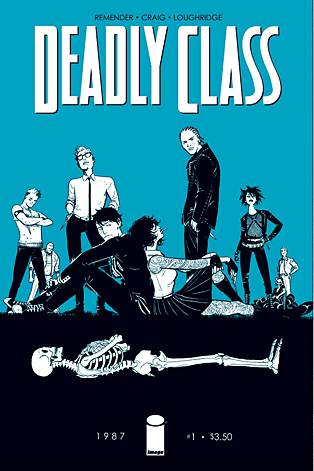 Bannen’s Book of the Week: Buy this book. Now.

Deadly Class tells the story of Marcus Lopez Arguello, a homeless man who’s recruited by a team of assassins. But the concept is not what sells Rick Remender’s story – it’s his characterization and dialogue. It’s the way Remender captures the voice of a defeated and forlorn person and the way he transmits this persona into a palpable, relatable and instantly fascinating protagonist.

Much of Remender’s story is built around crafting the character of Marcus. Through terse, myopic narration, Remender builds the world around Marcus as one full of careless and unforgiving people. Marcus is utterly alone, and the first time we glimpse any semblance of recognition, we’re excited, celebratory and hopeful.

Of course, when it’s revealed what awaits Marcus, should he choose to become an assassin, that emotion is replaced by something darker, more sinister, but equally as impressive. Who better to be an assassin than someone who has nothing to lose? Plus, as illustrated by the cast of characters, King’s Dominion School of the Deadly Arts is pretty good at training its pupils to be deadly.

Wes Craig’s artwork – a mix of methodical pacing and chaotic action – is where the story comes alive. Lee Loughridge’s colors give a tonal ache to Marcus’ plight, particularly in his darkest moments. And when Remender flashes back to Marcus’ childhood, Craig and Loughridge deliver the happiest moments of his life in sad and stunning clarity.

This is a comic layered with talent, and each member of Deadly Class contributes to make this a series that should be required reading for any fan of comics. Never have I seen such powerful character development before, and rarely have I been this sold on a book immediately. But Deadly Class has all of the pieces needed to make this series successful.