Call me an old soul, but I’ve always loved the Jazz Age and jazz music – the only genre in which the flute and clarinet can be truly hip instruments. I was excited about the new Great Gatsby movie until I found out it was actually a music video for modern R&B, rather than for the classic standards that bring to mind speakeasies, bootleg gin and organized crime. I now imagine this new Moulin Rouge will be a lovely sight to behold and an earworm best avoided. It will be best enjoyed played with muted volume while listening to Bryan Ferry’s jazz album on my laptop in the way that some people sync Pink Floyd’s Dark Side of the Moon to The Wizard of Oz. 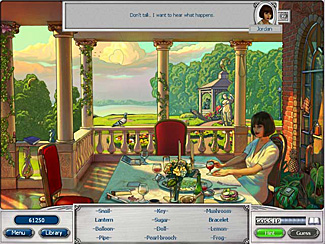 Still, I can’t avoid the buzz around this film as the advertisers pursue an American dream’s worth of gimlet cocktail wishes and sharkskin bracelet dreams. The Gatsby movie is marketed at every class except the middle one – if you either give wine glass holder festoon necklaces as housewarming presents or enjoy your gin with juice because your money’s on your mind, you will love it! Maybe someday there will be nouveau riche estate auctions for the tie-in merch from Tiffany’s and Brooks Brothers. Or the onyx cuff from the Trump hotel package, which turns one’s friends a shade of green chagrin when one shows them the personalized accompanying letter from Ivanka Trump. You may say these luxury goods undermine the novel’s theme that decadent wealth is immoral and leads to destruction. I wholeheartedly agree.

If this were truly a movie for everyone, including the 18-34 middle class, the tie-ins wouldn’t stop at beaded pearl hand leashes and a stereo-rattling soundtrack. Some lucky studio should be profiting from a $60 AAA Gatsby licensed videogame, with Tobey Maguire voiceovers and the Bryan Ferry Orchestra playing on the title screen.

However, I was much bemused to learn that there are two smaller-scale Great Gatsby videogame adaptations for the 100 percent of bored Internet surfers looking for something to do between reading their Gatsby preview articles and seeing the movie.

Big Fish’s hidden picture game is beautifully illustrated, but where’s the social maneuvering? You can’t really feel like you’re reliving the Jazz Age and pursuing the American dream when you are merely an observer. It’s illustrated, quotes the book and includes tedious bartending and typing mini-games, but at best it’s a coffee break game. Though the novel wasn’t particularly exciting, I believe the gameplay in a Great Gatsby licensed game should be a bit more dramatic than a still image of a driving scene.

The better Gatsby adaptation was an 8-bit Flash platformer. It may be played for free or just glanced at, as some journalists on the top page of Google results for “Great Gatsby videogame” seem to have done without getting the clever jokes made about the game by its own creators. The game has two titles: The Great Gatsby and Doki Doki Toshokan: Gatsby no Monogatari, a joke Japanese title in support of the joke creation story about discovering an unreleased localized copy of a Japanese game. It’s likely a play off the title, Doki Doki Panic, the Japanese game that was modded by Nintendo to be released as Super Mario Bros. 2. 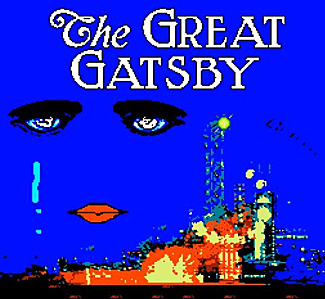 Doki Doki Toshokan parodies not only the Fitzgerald novel, but many classic 8-bit NES games. The top screen interface is reminiscent of The Goonies, there is coin collection and a power-up like in Mario Bros. to symbolize Gatsby’s attainment of wealth, the eyes of T.J. Eckelberg are a boss fight à la Castlevania and there is much shirt- and hat-throwing that adds literary symbolism to Megaman’s arm cannon. Oh, the decadence of throwing about your material possessions as you continually fire your waitstaff! It’s too bad the roaring ’20s did not have access to respawn points to handle the high rate of turnover in the West Egg mansion.

“Grand Theft Auto, West Egg” was a lovely phrase a NY Times journalist coined to refer to the 8-bit The Great Gatsby, and I also dearly wish it was a AAA game containing auto theft, prostitution and translation of the novel’s East vs. Midwestern cultural values motif into gang warfare. What better way to explore class warfare and organized crime than to make it an actual turf war between East and West Egg? You could even repaint Daisy’s roadster after she hit-and-run kills Myrtle or buy the Buchanan mansion with Gatsby’s bootlegging profits. Sadly, these mechanics were not to be realized in a first game by an indie team. I must direct my supplications and sycophancy to the Luhrmann-budgeted giant production studios if I want to experience the Gatsby game of my dreams.

As delightful as the Gatsby Flash game is, the game industry is yet missing an opportunity to make a game as opulent as the new movie and as true to the hypocrisy of Fitzgerald’s prurient criticism of the pursuit of wealth. We should have a Gatsploitation of epic proportions to allow players to live out the American dream of rising from rags to riches, failing to have an affair with a shallow materialist and finally ending up facedown on a mattress in a swimming pool. There’s always room for another Gatsby adaptation, and I know what I’d like to play, but I have neither the tools nor the talent to make the novel’s poor ghosts breathe dreams like air and drift fortuitously about. If you want to make it, feel free to use my thoughts as a springboard to your own Gatsby design doc:

The player character should be Jay Gatsby, not Nick Carraway, to make the player take responsibility for his ethical decisions and social manipulations. Carraway shows up periodically as a Greek chorus to comment in cutscenes on the lack of morality and sobriety at the Gatsby mansion – you can slap him around a bit if you like, old sport, but it may change your alignment and prevent you from redeeming Gatsby and getting the moral ending. 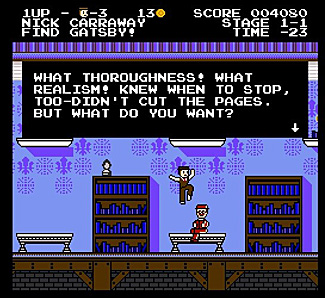 If Nick was a playable character, maybe there could be a run-and-gun chase scene after he overhears that Tom Buchanan is going to murder Gatsby; Nick then races to save Daisy’s unwanted suitor if Gatsby has sufficiently won her over and shifted back to the moral high ground.

The plot would essentially be linear and/or mission driven – like L.A. Noire or Heavy Rain – and faithful to the story of the book. But there should also be many different endings branching out from choices added on to the original story to explore the characters’ relationships and create different conflict resolutions. Will Gatsby win his true love’s divorce and remarriage, shoot Tom Buchanan first and get a life prison sentence or pass out drunk in his library? Only the spinning wheel of character fate that is a Mass Effect-style dialogue interface will tell!

An object interface like the one in Heavy Rain could be employed to mix drinks for the guests at Gatsby’s parties and win favor with those who don’t think the waitstaff is fast enough. The player could take note and remember details like Owl Eyes’ favorite song and then get leeching gadfly Klipspringer to play it for extra flavor text in his dialogue.

With so many symbols to miss the point of via literal interpretation, no book or movie lends itself to a game adaptation like The Great Gatsby. The green light could be a navigation beacon, leading the player as Gatsby ultimately to Princess Daisy Buchanan, a naturally-occurring golden foo, who is always in another castle. It always bothered me that the cover of the book just shows her eyes and mouth, physical features that are seductive but only parts of a woman’s identity. Daisy’s an idolized debutante on a pedestal who you must pursue without any explanation for why she’s so great.

Branching dialogue trees in a Gatsby game could give Daisy more dimensions as a character. We’d get a look further behind the “little fool” facade and see an elaboration on her reasons for rejecting Jay Gatsby to stay with her cheating husband. The game could explore the psychology of these characters and their chemistry. 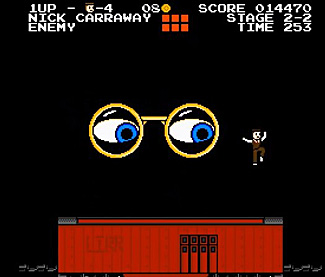 The beauty of games as a medium of expression is that they offer choices to the player, who can then see for himself how boring or satisfying the ending would be if Tom, Daisy and Gatsby could all be convinced to sit in the same room and let their psychological elephants out. Dialogue trees could contain a moral choice and a sycophantic choice to gamble at gaining the respect of the NPCs. Sometimes, maybe there would be a choice to either flaunt wealth or be generous with it to bring your morality back into a good alignment. Observing facial animations (like in L.A. Noire) would tell you whether Jordan was lying about her golf score or lacking self-confidence, while the choices would have character-developing conditions attached, or triggers that would lead to different trees of responses from characters like in Mass Effect or Oblivion.

It would also be great if we could use a Great Gatsby game to explore the sexism in ’20s society, giving players a choice to support or question Daisy’s sardonic quips about and outrageous maternal neglect of her daughter Pammy, who takes a backseat to all the drinking, debauchery and murder in the novel. Maybe Nick could convince everyone else to be honest with each other, and Myrtle would leave George for Tom and Tom would leave Daisy for Myrtle and Daisy would finally love Gatsby and you could make the rare yet respawning species of bump-mapped shark go extinct to redecorate his mansion in shades of foobar gold.

So there’s an idea for a lovely AAA Frankengame, free to anyone who will execute it. Personally, I just want to explore a beautiful art deco environment and throw shirts around.

Now, if you’ll excuse me, I’ve been missing BioShock. Can somebody please make a shirt-throwing mod for that game?