Oh, that gray-lit corner office. How many times did I pace that narrow rectangle of floor, peering at the unyielding bric-a-brac of a lonely life, looking for a shred of writing, a tattered photograph, any clue of what was or would soon come? How many times did I round the desk to try that second door, hoping to see that flash of X-marked blue that meant “open”? And how many times, seeing nothing but gray and white, did I finally cross that stretch to the front door, and pass through it once again? How many times did I return?

When I heard that BioShock Infinite would feature a first-person protagonist with a fully fleshed-out backstory and frequent non-player-controlled dialogue, I was wary. Most videogame protagonists are intentionally crafted to be blank slates, to be avatars for players to don and fill and be. Would there be room for me in a character who has feelings that I haven’t selected from a list?

BioShock Infinite talks about choice and gives us none. It is a tragedy of reactionism, of infinite possibility and unavoidable consequence.

Cohabiting the first-person perspective with Booker DeWitt was off-putting, at first – I got upset when, in one of the first scenes, Booker called out to a person I hadn’t actually noticed yet. As I played the game, though, the excellent writing and voice acting began to win me over to my alter-ego’s ego. It wasn’t until the end that I really appreciated what Irrational Studios had done in making Booker DeWitt a player character so far from player control.

[Spoilers from here on out]

The beauty of the original BioShock was that it took the conventions and constraints of the first-person shooter genre and wove them into a narrative in which they made internal sense. Why are there linear corridors? Because you’re in an underwater city. Why are all of these NPCs so repetitive and incoherent? Because they’re insane! Why do I have weird powers? Because this is a society of self-worship, who used volatile substances to increase their personal might and paid a terrible cost.

BioShock Infinite takes it a step further. As many have pointed out, the game takes its basic framework from its predecessor, changing little in the way of combat or structure. It made the developers’ lives that much easier, sure, and players are used to game series building off previous titles. It’s a trope we’ve become accustomed to. But BioShock Infinite isn’t satisfied with tropes. The developers needed a reason why playing this new game was so similar to playing BioShock, one that made sense both within their narrative universe and in the themes they explore.

And in that gray-lit corner office, I realized that they found it. 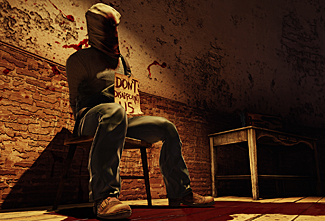 Constants and variables, Elizabeth explains. That’s what holds together a universe of infinite possibility, a universe in which the same man can be a tyrant or a vagrant or a prophet. Do the math from the timeline in the Hall of Heroes and you’ll find that the man whose body you’re sharing was just sixteen at the Battle of Wounded Knee. The man who gave up his daughter was just eighteen, bereaved, alone and struggling with post-traumatic stress disorder. The pieces all fall into place. He is a victim of war, a shell-shocked boy whose every decision is confined, shaped, branded by that one terrible battle. He is a reactionary. Surly mercenary or zealous prophet, his lives are the hyperbolic bargains of one desperate man.

The timelines split in that river after the Battle of Wounded Knee because in that moment, Booker made many different choices, and each time, it was the only possible choice he could make. Every moment in Booker’s life and lives, both during and before and parallel to what the gameplay encapsulates, is a reaction to Wounded Knee. Just as my player agency is encapsulated by Booker’s past, Booker’s voice, Booker’s life.

I am Booker, but I’m only Booker insofar as Booker allows me to be, just as the Booker I’m with is himself because, by the law of infinite possibility, he had no other choice.
Videogames are supposed to be about choice, the same way that player characters are supposed to be blank slates. BioShock Infinite talks about choice and gives us none. It is a tragedy of reactionism, of infinite possibility and unavoidable consequence. 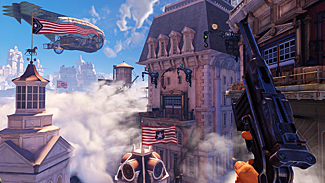 It’s a powerful commentary on belief – how many of us would be willing to admit that the truths by which we define our lives are our own reactions to events outside of our control? That faith is an external choice, not an inherent trait?

The broad, sweeping and epic reside in beautiful tension with the hopelessly mundane, the freakishly accidental. The choice with the reaction. The variables with the constants. The avatar as a vessel for play with the player character that is just a bit too much himself to be me. In a narrative about infinite universes, about choice and conviction and change, the thing that all ties it together is a child’s severed finger. A little scrap of flesh left behind in the passage from one world to another that allows Elizabeth to exist across all of them, and to bring Booker face-to-face with himself.

Columbia, Wounded Knee, the lighthouse, the garden, the baptismal water: BioShock Infinite is a set of concentric circles, like identical Russian nesting dolls. And when you reach that last doll, you find yourself back in that tiny gray office, stuck in a first-person view with someone who’s not quite yourself, acting out a role that neither of you wants to be. Opening that once-impregnable side door that leads into a nursery that has always and never existed.

“There was no baby,” Booker insists to Elizabeth. “And if there was I sure as hell wouldn’t give it over to this guy.”

“Booker,” Elizabeth replies, “You don’t leave this room until you do…You can wait as long as you want. Eventually you’ll give him what he wants.” 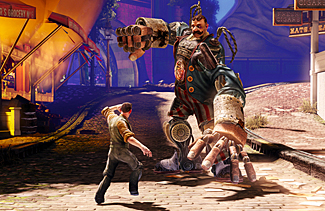 I could have turned off the game. I could have dropped the controller, left Booker standing in the gray-lit nursery forever. But I didn’t. Eventually, I moved the control stick, tapped X two times.

“What choice do I have?” Booker says bitterly.

You find yourself opening that door not because you want to, or because you’ll be rewarded, but because there’s nothing else to do.

Sometimes when I’m listening to people talk about BioShock Infinite my mind takes a step back and wonders, was this game really as good as all that? Alternate timelines, lost daughters, killing your own father – we’ve seen that before. It sounds silly when you put it in words. Why did this game blow my mind?

Then I think a little bit more, past that cursory level of narrated thought and into experiential frazzled nerves and cramped shoulders, of frustration and hope, when you’ve put all you’ve got memory. I think about the feeling of running through Columbia, of hearing myself say things that I hadn’t intended to say, about learning from selves that I wasn’t but had been and was becoming.

That rush you get when suddenly all the pieces fall into place. That feeling, right on the verge of into this system and it outputs back at you: “Good job. What have you done?”

There aren’t many games that can land a blow like that. And that’s why it has to, has to, be a game. Because on paper – what the hell, right?

But we could all play the same videogame, the same disc, even, and complete every checkpoint, earn every achievement and still have different stories to tell. Did you choose the bird or the cage? The sniper rifle or the RPG? Did you draw your gun on the hesitant teller, or did you choose to trust, and wear the bandage on your hand for the rest of your in-game life? 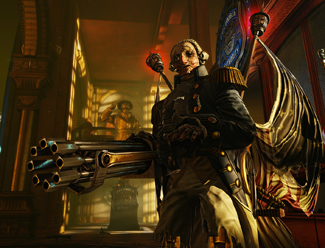 How long did you stand in that gray-lit room before you handed over your baby?

Oh that gray-lit corner office. How many times did I pace that narrow rectangle of floor, peering at the unyielding bric-a-brac of a lonely life, looking for a shred of writing, a tattered photograph, any clue of what was or would soon come? How many times did I round the desk to try that second door, hoping to see that flash of X-marked blue that meant “open”? And how many times, seeing nothing but gray and white, did I finally cross that stretch to the front door, and pass through it once again? How many times did I return?

And in the end, in that cluttered gray office whose floor I paced one hundred twenty-three times and counting, there’s still only one door. Does Booker know what’s behind it? Is there a baby in that cradle?

Booker isn’t talking. But I take it on faith that there is.

Jill Scharr spends a lot of time in cluttered offices. Follow her on Twitter at @JillScharr or read her other stuff at JillianScharr.WordPress.com.