Recently, to my overwhelming joy, the stars aligned and I found myself with a regular board game group. For three weekends in a row now, we’ve played Risk: Legacy, a variation on the classic game that permanently changes depending on who wins, who loses and how everyone plays.

As an only child, a board game group is something to celebrate. I have always loved board games but having no siblings meant that playing them was dependent upon either my parents or the neighborhood kids. My parents, being adults, generally played too well, while having friends over on a rainy day meant more immediate entertainments like movies and videogames. 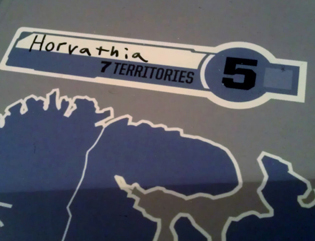 More often than not, I simply played board games by myself. I taught myself chess this way, with the help of a lovely old book filled with diagrams and poorly reproduced photographs called An Invitation to Chess. Avalon Hill’s intricate Kingmaker was difficult to puzzle through but, in doing so, I wound up knowing more about the War of the Roses than any elementary school kid reasonably ought. Thanks to By Jove, I became engrossed in Greek mythology in the same way.

Playing alone was not empty of challenge. I would only let one player have the benefit of my full strategic faculties. My opponents, on the other hand, were always fettered with a set of behaviors, dependent on the game. When playing their turn, I would only allow myself to move within those parameters. Player 2 is obsessively defensive. Player 3 is recklessly offensive. Player 4 is really annoyed Player 2 beat him in the previous game. The more I played, the more elaborate the opponent behaviors would get. Though this might sound schizophrenic, by managing these variables while simultaneously attempting to exploit or defend against them, I gained a deeper understanding of a game’s mechanics than if I had played it casually with friends.

This naturally segued, as I got older, into running Dungeons & Dragons games, since the role of the Dungeon Master is, in essence, to manage variables. Between D&D and ever more elaborate videogames, playing board games solo fell to the wayside.

Something similar happened in 2005, though. I stumbled on an addictive little Flash game called Dice Wars, a fast-paced, highly randomized variation of Risk. Because chance plays such a huge role in the game, from initial placements to how your territories are reinforced, it is very easy to lose a game quickly and badly. I played it obsessively and, after several days, I began to discern indication of whether a game would likely lead to victory or defeat. Chance can never be entirely defeated, but after a few more days I knew before the first turn whether or not the game had randomly generated a map I could win. I stopped playing Dice Wars soon after.

All these lessons came to bear in Risk: Legacy. Unwinnable’s resident board game guru, Gus Mastrapa, warned me before the first game to encourage the other players to play aggressively. Unlike classic Risk, where the goal is to entirely eliminate all the other players, victory in Legacy is won by accumulating four star tokens. This is usually done by accumulating cards (won via combat) or taking over rival headquarters. Every player starts with at least one star token. Playing defensively often leaves you out of the action.

As we were setting up the first game, I joked that I wanted to play the faction that looked the most like fascists. I was only half kidding – after losing the first game to my own folly, I have developed a brutally efficient system for victory: strike fast and punish weakness. I won the next five games in a row.

Part of that success comes from disregarding preconceived notions about the game. I have long held that Russia (Ukraine in classic Risk) is the linchpin for victory. Likewise, my opponent Shawn Dillon has maintained that he who holds Australia holds the world. Russia wasn’t a factor in my first loss and I proved to Shawn that Australia was a death trap in our fourth game, when I penned him in and eliminated him within the first two turns. 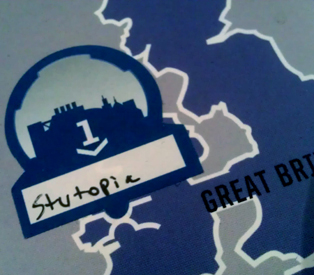 Again, it is the stars tokens that count, not the conquests. The most valuable territories are the ones that hold your opponents’ headquarters, as those building count as stars in the tally. In our third game I won by tempting my opponents to attack the un-reinforced middle of my empire while I made one final push toward their HQs.

My final victory was won by losing a battle. At the end of your turn, you get a resource or a coin card if you conquered a territory. Once the coin cards run out, a special bonus is revealed: the person with the most territories gets a star token. So, when Ian Gonzales defeated me in North Africa and drew the last coin card, he actually defeated himself.

My theory, then, is not that the object of a board game is to win, but rather that the object is to encourage your opponents to lose before you do. I hope to test this theory over the ensuing months with my regular board game group.

Unless, of course, it works so well that I lose my regular board game group.

Speaking of misunderstood tyrants, Stu Horvath was unreasonably excited by the recent news that the body of King Richard III had been discovered under a Leicester car park. Poor old Richard. If you nodded in agreement when reading that, you should follow him on Twitter @StuHorvath.