Exactly six years ago I bought a Nintendo Wii – came home from Toys “R” Us, plugged it in. (The box is still there on the floor of my girlhood bedroom, right where I left it in another November.)

“Can you imagine, Al?” my mother asked my father. “In our lifetime?” She was standing around marveling as I – ahem – went bowling.

Then I saw the Wii’s “pacemaker” warning and now I was pushing my adoptive dad out of the room. “Out, out!” I commanded him. I was not going to be the one to murder my father, thank you. 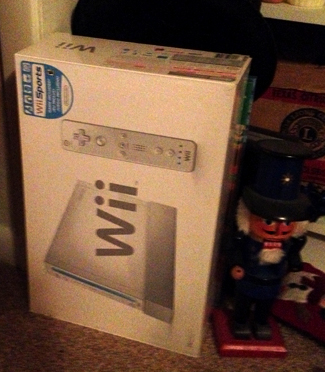 I played videogames exactly because I wasn’t permitted to and I reviewed them for money simply to irritate my mother further. If you have a streak of impishness running through you, there is no better motivator than having someone in your life telling you what you cannot do.

It wasn’t until that February column, the one about Creatures, that my mother announced she finally understood.

“I think,” she said to me carefully, “I’ve been telling you the wrong thing.”

“No,” I said, and then I was unusually quiet, because I was beaming. Or maybe gloating. Or maybe I was just standing there quietly: I don’t remember.

I often tell freelancers that every article they write should be a love letter to just one person: they ought to picture that person, maybe pine a little for her or his love, as they write directly to that person. The Creatures column, I’d written directly to my mother.

I’ve never cried so hard as when they told me to play music during it – you know, during the whatever. The doctors were telling us to get the house ready: it was the first time anyone openly said death was imminent. I suddenly remembered I’d never gotten the living room CD player fixed. I doubled over; I almost vomited.

“People ignore families’ wishes all the time,” one of the doctors – the doctor I liked least – told me, smirking.

The words “do not resuscitate” imply crucial treatment is somehow being withheld; “allow natural death,” conversely, suggests that something is being given.

I launched into an angry speech, my If People Died Whenever They Felt Like It, Everyone Would Be Dead diatribe.

“I guess I was hoping there would be another option,” my cousin said to the doctor.

“Well,” I snapped at her, “this isn’t a buffet,” and my cousin burst into tears.

When I was a child I was frightened of needles and during my first immunization the doctors had to chase me through the room, had to hold me down and stick me. I have always been scared of doctors.

I sat in the darkened ICU and thought a lot about videogames. I thought about possibilities and branching decision trees.

One very bad night, I realized I’d started thinking about games in which you, the main character, are tasked with giving your victims the “best” possible death, games in which a death can somehow be botched.

It was September 23, near midnight, and the nurse was switching out my mother’s fluids. I watched, alarmed, as my mother’s vitals plunged. Then new bags were connected and the little line graphs on monitors, illustrating how “alive” she was, righted themselves and straightened.

I stared at the nurse. “There isn’t time to get her all the way home,” I said.

I’d worked so hard to improve my mother’s condition; in reality, I had bungled her death instead. I had encouraged what was already, with or without my stabs at intervention, a complete shitshow.

One time, I glanced over and my mother’s eyes were perfectly focused. They were focused on me.

“I have a couple things I wanted to show you,” I said to her, then, walking to the bed and sitting. “Do you remember the game I did voice for? It came out. Hang on, I’ll show you.”

With multiple organ failure it’s hard to get everything balanced just right so that oxygen is getting to the brain and the person can “wake up.” So, if nothing else, I know how to misallocate an important moment. Here I was, with my mother dying in front of me, and I still wanted her to be proud. Just, proud. Oh, my God, it’s so self-centered.

I demonstrated the game on my iPhone. It was impossible to hear my tinny recorded voice over the sound of her machines, so I repeated the words after I’d heard another version of myself say them. “Line,” I narrated to her. “Hear that? ‘Triangle.'” 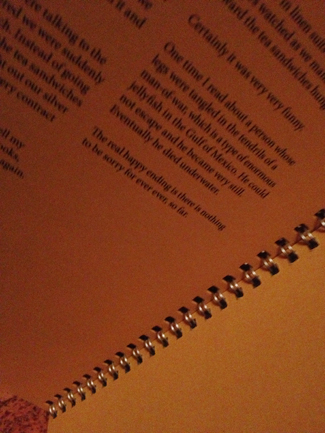 My game ended quickly. “Well, okay, that’s that,” I said, putting the phone down and fumbling for something else. “Remember my story? My story came out in the magazine. Um, in August.”

I opened a chapbook in front of her, and she touched its pages, and then she took the magazine from me and shut it and kind of massaged its cover with her thumb. Then she dropped the magazine into the folds of the bed and reached for my hand, and she took my hand and squeezed it.

And squeezed it again. And then I cried, and she squeezed my hand another time, and I looked up and right into her eyes, which were wet and meaningful and so clear, and her face was obscured by the breathing mask but her eyebrows were furrowed the way they always are when I cry, and I apologized to her for hurting her and for being so sad, and I looked down again at our clasped hands, and then I folded myself in half and cried into both our hands.

And then I pitched forward off the chair and onto my knees and I cried into her bedsheets and kissed her hand, because there was that mask forcing air into her and there was too little of her face to kiss.

Around the same time, in another part of Texas, Terry demonstrated the last scenes of the game I’d shown my mother, Super Hexagon. It’s Terry’s game, and Terry is better at playing it than anybody else.

Hexagon is an important game. The first time I met Terry I made him stand there and listen to my ideas about that game, about how his game is about living life. I talked about stopping and waiting and then moving, about pivoting your cursor until you find your window of opportunity. I told him about luck and not-luck and memory and decisiveness.

“It sounds very nice when you put it that way,” Terry told me pleasantly.

Recently, Edge‘s Jason Killingsworth asked Terry about the possibility of Super Hexagon being about death instead.

And in that closing scene – spoiler! – where the world slows down and then opens up, and you backtrack through the narrative of your cursor’s life, and it really was impossible to survive much longer…well, I don’t know how else to describe it except as a death. I think it’s very beautiful, that most players will never see it.

I remember my cousin helplessly asking one of the doctors what we were supposed to do. She was asking the doctor I fought most, the one I liked least.

Instead of giving the order, I announced I’d give the order in twenty minutes.

I didn’t cry, not right then. Instead I thought about the depths of my own poor judgment. I wished, for her sake and not mine, my mother had any other daughter at the controls.

The obituary I wrote for my mother was stupid. I knew I wanted to honor her, but I wasn’t sure how. I didn’t know how to write about her. Just trying to – I felt a type of shame, like now.

I wrote about her life – where and when she was born, her accomplishments, that she liked tennis – entirely from memory. I wanted to ask her questions; I wanted to fact-check. I wanted to Google her. I wanted to scream.

I let go of her hand. “No one’s holding you,” I said to her stupidly.

And then I heard myself, and then I was able to hear her, really hear her, and I gasped.

When you choose a natural death for somebody, it might feel like dropping off a cliff when, maybe, in free-fall you say to yourself, “This isn’t what I want, how do I stop this?”

I wanted to stop; instead what I shouted was, “Is this what you guys meant by ‘comfortable.'”

One of the last things I told my mother was “I am letting you go.” In the hospital they tell you to say that to the person in the bed. They told me to say that because her heart just wouldn’t stop.

Thank God she couldn’t hear me: it was a lie.