I’ve been attending New York comic book conventions since I was a kid. I vaguely remember going to one at the Jacob Javits Convention Center and going to quite a few of the Big Apple Comic Conventions held in the Church of St. Paul the Apostle’s basement. I’m a lifer, what can I say. When Reed Exhibitions started holding the New York Comic Con seven years ago, the New York City comic book convention scene changed drastically.

Over the last seven years, NYCC has grown from a show of 33,000 attendees occupying a portion of the Javits Center to approximately 115,000 attendees that take over all 675,000 square feet of the 26-year-old facility. It is a massive change from the Big Apple shows at the Penn Plaza Pavilion and St. Paul’s basement. However, this is a world after the one-two punch of Bryan Singer’s X-Men and Sam Raimi’s Spider-Man; those two films increased the profile of comic book superheroes and in turn created a lot more foot traffic on the con floor.

There were no fancy displays, no booth babes or blasting pop music – just comic creators and comic fans talking about comics.

For all the Chevrolet and Sears Craftsman booths, the multiple videogame setups and genre movie booths (the latter two of which were awesome), this year’s New York Comic Con was focused predominantly on comics. Valiant Comics was giving out previews to their new Shadowman comic. Archie Comics was selling a gorgeous Fiona Staples-drawn Josie & The Pussycats poster and Top Shelf, Oni Press, 2000 AD and more publishers had booths to sell and show off amazing comics like Infinite Kung Fu, Stumptown and Judge Dredd: The Complete Case Files series.

While walking around the show, the increase in attendance was obvious. As I was heading to Artist Alley (AKA Javits’ Northern Pavilion, AKA The North Bronx), I had a West Wing moment. While walking and talking with two colleagues, we observed that crowd control was 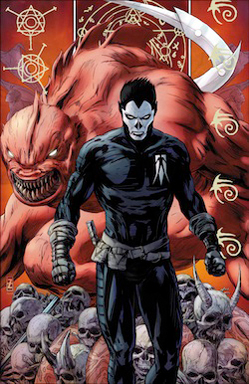 abysmal. The Javits is a fine convention center, but as my pal pointed out, it wasn’t really built for a show that’s quickly reaching the scale of
San Diego’s Comic Con International. The space simply wasn’t designed to accommodate this kind of scale. While foot traffic management was a low point on the show floor, the crowds in Artist Alley were inspiring.

Last year, the North Pavilion was essentially a gaming station with a stage. There were some dealers selling Magic: The Gathering and Yu-Gi-Oh cards and a slew of tables where attendees could play collectible card games or even snack on a sandwich. It didn’t seem to be the best use of the space. This year, the space was dedicated to Artist Alley and it was packed! Artists and writers were doing sketches, signing books and chatting with fans. I cannot express how happy it made me to see that. There were no fancy displays, no booth babes or blasting pop music – just comic creators and comic fans talking about comics. It really reminded me of the bazaars that were the old basement comic shows.

The Artist Alley is the heart of any comic convention. Yes, the publishers have signings and events at their booths and there are loads of panels and screenings that seem to be what draw a lot of attendees. However, Artist Alley is where pros and fans congregate and the NYCC alley is an amazing place (if you can find it).

This year’s New York Comic Con had a lot of announcements. Scott Snyder and Jim Lee will do a monthly Superman comic. Agent Coulson lives and will be on the S.H.I.E.L.D. TV show. There was more from the big two, but they don’t need the ink. 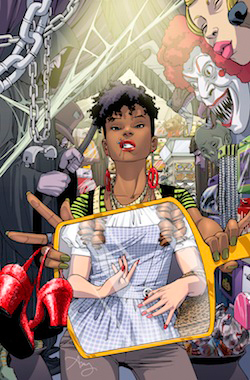 NYCC was also a place for creators to show off their Kickstarter triumphs. Amy Reeder and Brandon Montclare showed off Halloween Eve. Jamal Igle had D.A.R.T. membership cards for his Molly Danger backers and fans. David Gallaher and Steve Ellis were selling their series, The Only Living Boy. Devin L. Michaels and letterer Taylor Esposito were on the scene with their book, Destiny’s Fate.

This is a show where Abrams Comic Arts brought 50 signed copies of their Mars Attacks: 50th Anniversary Collection and sold all but five of them on Thursday’s preview night. It’s a show where on a panel with three of the most acclaimed writers in comics – Grant Morrison, Brian K. Vaughn and Jonathan Hickman – all promoted creator-owned work with Image Comics. The energy was exhilarating.

Comics are a collaborative medium. Pros, fans, retailers and press are all in it together. However, Brian K. Vaughn put it best at the Writer’s Room panel: asked about the collaboration process with an artist and whether or not he’s asked an artist to redraw their work, he said, “I don’t think I’ve ever asked an artist to redraw a page. They invest a whole day of their life on something that may have taken me an hour to write. So I feel it’s my responsibility next month to describe it better. Now I have to play off whatever they did that I didn’t expect. I like that.”

———
Ian Gonzales couldn’t really use Twitter at NYCC as Internet was spotty at best, but drop him a line now @iangonzales.