Four of us, skeptics all, gathered around my Ouija board. Two hands gently rested on the planchette as questions were asked. It never moved. 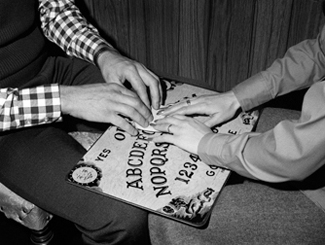 Later that night, a woman screamed outside – one sharp, frightened note. I live down the street from a bar that is one step up from a roadhouse, so I naturally assumed someone was up to no good. I doused my light, got out of bed and surveyed the street through my bedroom window. There was nothing there.

I pulled on jeans and boots and made my way downstairs and out the front door. Not much more than 90 seconds had passed since I heard the scream, but the street was empty from corner to corner. For a moment, I contemplated calling the police, but the whole thing suddenly felt silly. I went back to bed and my book.

An hour later, a loud boom jolted me out of bed again. This too, is not unusual – sometimes the paperboy is a little overzealous with his throw and the paper thuds against the front door – but something felt different this time. The atmosphere in the house was thick. I could feel the itch of fight-or-flight panic scrabbling at the base of my skull. Each step forward was slow and ponderous until I stood on the threshold, unwilling to open the door because it felt so obvious that something was on the other side.

I did, eventually open the door. No shade greeted me but neither was there a newspaper lying on the porch.

That oppressive feeling came back late the next night, accompanied by soft, distant sobs. The night after that, deep, sonorous breathing could be heard coming from the empty corner of my living room. Then the strange sounds stopped altogether.

Had our experiment with the Ouija board attracted the attention of angry spirits? Was it just a series of puzzling coincidences and misinterpretations? I am inclined to think the latter.

Still, it was amazing.

Supernatural horror is existentially comforting because it implies a spiritual reality beyond the measure of the rational, scientific world. Naturally, my brush with spookiness was, for a professional doubter, just as tantalizing. However, around the same time, I encountered a terrifying exception to the rule. It was a short indie videogame called Slender: The Eight Pages. 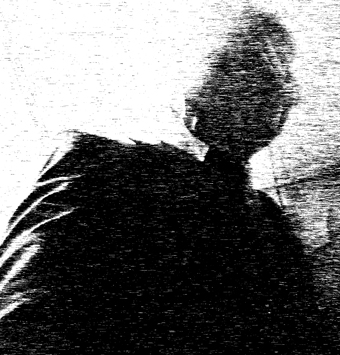 Slender is based around a mythology that developed out of a contest on the Something Awful forums to create an urban legend by manipulating old photos. The result was Slender Man, a blurry figure in the back of the frame: tall, thin, dressed in a suit, with unnervingly elongated limbs, a featureless white face and, sometimes, a nimbus of shadowy tentacles. The creature haunts forests, stalks children and can only be seen through the lens of a camera.

Searching for Slender Man on the Internet yields a host of deviantART doodles of unimpressive quality, several web series (including the excellently creepy MarbleHornets) and a kind of self-perpetuating collaborative Alternate Reality Game.  None of it comes close to Slender.

The game is minimal. You are in a forest at night. You need to find eight pieces of paper, each with a cryptic note on it. You can sprint. You can turn a flashlight on and off. That’s it – you, a lonely forest and the strangely monumental landmarks within it; a rusting car, a tunnel, a fuel tank. And the Slender Man.

In the beginning, the game is quiet except for the chirping of crickets and the crunch of gravel underfoot. After I found my first page, though, unnatural sounds begin to filter in, rumbles and noise and static. Then, suddenly, he was in front of me, a suited figure in the distance, in the mist, unmoving. Static roared into the speakers and distorted the visuals. It struck me ice cold, the most terrifying moment I have ever had in a videogame, let alone book or movie.

The Slender Man appears randomly, but ever closer. When he gets you, the game is over. My game lasted about nine minutes. I only found two pages. I will never play it again.

The Slender Man is frightening because it is at once utterly 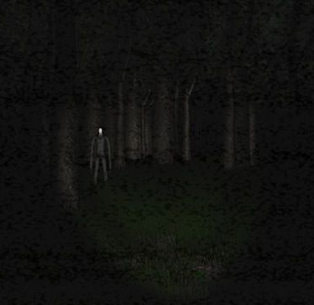 alien but somehow also plausible. It has no lore, like a vampire or a ghost, so the enigma of it makes us reel. On the other hand, a creature so human-looking is easy to connect to. Its distorted limbs and empty face seem like a psychological manifestation – the menacing id run wild – or a thought form, or even a visitor from another dimension. One wiki tries to explain the Slender Man’s power with quantum mechanics.

Slender Man’s motives are another source of discomfort. It does not hunt us to feed. It does not war against God. It seeks no revenge. It watches, it terrifies and, when it is ready, it takes us. Who knows why, or where, but it all feels deeply wrong.

I think back, to that moment when I stood at my front door, not wanting to open it for fear of what was on the other side. A ghost, a cloven-hoofed devil – I could deal with that, but a silent, faceless thing in a suit filling my head with deafening static – I would unravel. If that is the shape of the supernatural, I want no part of it.

When not cowering under his bed, Stu Horvath can be followed on Twitter @StuHorvath. Full disclosure: the Ouija board in question was a Hellboy board designed by Mike Mignola, because that’s how we roll into the spirit world.