Recently, I was standing in front of a bar – the Green Mill. As I love people-watching, I kept an eye on the various passersby, living their own lives, lost in their own conversations. I was torn between standing absolutely still and shifting from foot to foot. If I followed the former, I would perhaps blend in; people would look over me and I would just seem a fixture who belongs there for whatever reason. If the latter, then I would appear anxious, as if I was waiting for someone. 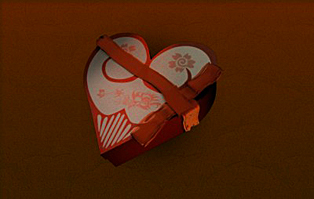 Looking at my watch, I mulled it over.

Five minutes late. Did I get the time wrong?

Fifteen minutes late. Was I at the wrong spot?

Twenty minutes late. Did they perhaps see me, decide to go the route of silently rejecting me, and walk off before I ever spied them?

Which is to say, I sympathize with the protagonist, Julian, in Dinner Date, and his experience of being stood up. At the same time, I had to Wiki the game for his name. Beyond the fact that the date upon whom he is waiting is Japanese, I can’t tell you anything specific about his life. He’s unsatisfied with his job. There is a general feeling that he wonders if perhaps he’s wasted too much time memorizing silly poetry instead of grabbing life and sucking out its marrow.

Yet as he speaks, I wonder why my experiences have always been out in public, seemingly awaiting the judging stares of people wondering why I am looking at my watch every five minutes. Are they looking at my experience and recalling their own dread of this process, much like I am doing with Julian? Or, are they, like I later do, suddenly picking apart this stranger’s life?

Julian’s experience isn’t compelling in most senses of how we conceive of games. I don’t control him: he will drink that glass of wine if I want to progress. It’s just a question of when I, his subconscious, actually give him the go-ahead. He will go smoke and stare at the Dinosaur comic on his fridge, while I squint to make out the poem, “Genius in Beauty,” by Dante Gabriel Rossetti that is put up next to it. When I say squint, I do mean it. The textures are somewhat blocky, the text blurry, and I find myself grasping for some meaning. Perhaps his sparsely decorated fridge holds the key. 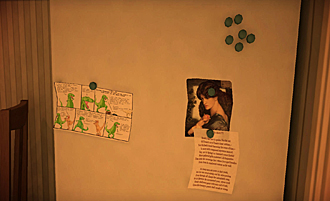 The comic makes a wry joke about declaring unpleasant parts of one’s life as non-canon. I can see the appeal in such for someone who has gone through the process of being stood up. The poem is a sonnet, appropriately about love, and there again we have a man obsessed with poetry – perhaps a worthless endeavor as one pursues romance in one’s youth. He did mention his age: 27. I just turned 29. I still like poetry, but I also don’t stick it on fridges.

Yet despite our shared experience, I don’t know if I’d get along with Julian. That makes me wonder if I even like myself.

What I’m getting at is that the various bits and bobs in Dinner Date may be forgettable. Which is why my mind kept focusing back to my own experiences as I listened to Julian.

What was I wearing when I stood outside the Green Mill? I saw that one guy I’ve seen on various dating sites pass by. We chatted once, before it slowly petered off. I can’t even recall what he was wearing.

In the quest for photorealism, I don’t trust my memory enough to remember images so concretely that it truly matters in the long run. Julian is white, yes. He speaks with a British accent, though I’m not familiar enough with regionalisms to pinpoint it beyond the isle. He’s a man, yes. Were his nails clean? His hands seemed warped, though I can’t recall the particular vagaries of how.

Maybe this would be one of those experiences to set before critics and declare, “This is art!” The control I have isn’t going to change anything. Anyone could start up the game. The way they get to the end is largely as inconsequential as anything but a mirror for how neurotic we become when waiting for something to happen.

There’s nothing wholly innovative about Dinner Date. It’s on the rails, but for an emotional tone. I may not hit every single emotion just right, but if I get through it, I’ll end in the same place. Would Virginia Woolf function well in such a setup? Is it too long a narrative? 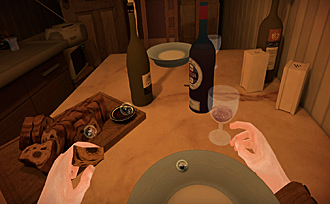 How much time can we ask of a player to not wholly control the experience? Less than an hour for Dinner Date certainly doesn’t seem like much. But is it worth the price? Do I want to play just to have that sinking feeling of standing in front of a bar wishing I had a smoking habit when in reality I really do belong there?

I didn’t test my skill level, and there weren’t any sudden revelations. My date eventually came, after all, and didn’t notice me at first. I didn’t mention that I’d been waiting. I also don’t think he’d much like Dinner Date. He seems the pragmatic type and would wonder what he would get out of the experience.

I do like Dinner Date. Am I a masochist? The game confounds me. It doesn’t offer anything fancy or new. But I like questioning myself through the channel of another person who has insecurities and doesn’t quite know it until he takes a step outside of his existence. I don’t really have anything to prove, so I should stop worrying so much.

Dorks on a Plane