You are James Burton. Tasked with the solo mission of saving the universe from deadly parasitic aliens called Bacterians, you must pilot your trusted Vic Viper combat craft into the heart of their infected empire. It is said their leader, Bacterion, is located on one of the worlds assimilated by the Bacterians, a world that may be galaxies away. Your mind wanders as you take the shuttle from planet Gradius up to the war ship. You never thought that the fate of the universe would rest on one man’s shoulders – especially not yours. 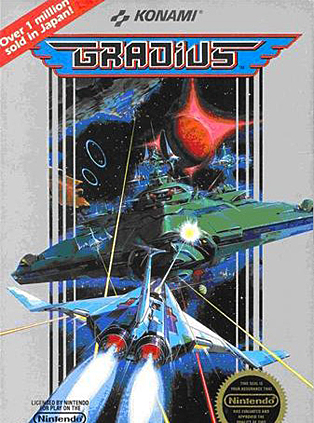 If there was ever a craft to complete this task, it’s the Vic Viper. Designed by the suspicious, eccentric scientist Dr. Venom, these space fighters are like the tools of a surgeon – they make an incision and rout out the infection. They eradicate the cancer with more than just radiation. Vic Vipers have even been used to destroy large alien threats by flying inside their bodies and attacking them from within. The multi-tiered weapons system is so powerful that it has the potential of protecting a ship from waves of enemy fighters, asteroids and even a volcanic explosion. There is also a shield system that can sustain a finite amount of damage. For security purposes, you must enter a code to unlock the weapons system; otherwise, you must use the power cells from destroyed ships and customize the craft’s speed and weapons.

You sit in the cockpit of the Vic Viper, the ship nestled snugly in one of the metal hands of the deployment bay. The belly of the big ship opens below you, and the hand lowers you into the star-studded abyss. You set the coordinates for the lightspeed jump. What will be on the other side, you wonder. It is said that one of the infected planets has statues on its surface not unlike the Easter Island moai statues of the far away homeworld, Earth.

The onboard computer tells you in a surprisingly encouraging tone that the jump will occur in five seconds. Four seconds. The hand releases the ship, it’s floating slowly down into space. Three seconds. The ship starts to move. Two seconds. Faster and faster, the stars start to streak and meld. One second.

I interrupt this Gradius fanfic for some background of what you just read. It is a combination of data from the manual of and details from the original Gradius game, along with further traits from Life Force, Gradius III and background stuff I imagined then and now. Gradius was one of the first NES games I played way back in 1987. While the simple space shooter concept was easy to grasp, Gradius featured the challenge of powering up your ship as the waves of enemies built up layer after layer, like a visual symphony of chaos! 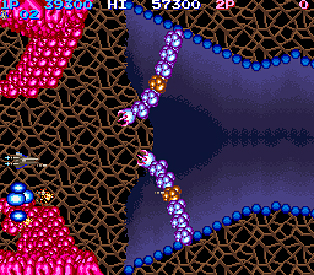 Most of the Gradius levels start out in open space, and the automatic scrolling takes your ship through either a planet level, space station, space ship or a tangle of biological infection. The constant dodging of enemies and projectiles becomes maddening. Also, towards the end of each level there is a brief segment where the automatic scroll stops and a million objects (volcanic rock, spacecraft, projectiles) fly directly at you . This barrage often guarantees that you will not make it to the final boss, which is usually a warship that’s actually relatively easy to destroy, compared to the gauntlet you’ve just endured.

The simple foundation of Gradius has led to a surprising variety of sequels, semi-sequels and parodies. Chief among these for me was Life Force (aka Salamander in Japan). This game features side-scrolling and overhead fly-through levels, which progress through the many segments inside of a giant space alien. There’s also Gradius III for the SNES, a beautiful looking and sounding sequel/update to the original.

There have been numerous other straightforward spinoffs such as Solar Assault and parodies like Parodius, Otomedius and the homoerotic Cho Aniki. The Gradius franchise and the Vic Viper have embarked on many fun, unique and challenging missions.

And now, back to the conclusion of the story!

You’ve flown over four worlds so far. Your nerves are shot; the ship has sustained heavy damage and doesn’t have much left in it, either. The warp drive is destroyed and you may not be able to get back home.

Fewer and fewer mechanical obstructions stand in the way. They’re mostly biological. After an onslaught of these parasitic creatures and blasting through walls of infectious alien growth, you see something other than the giant battleships at the end of each loop. With outgrowths attaching it to either side of the corridor, it looks like a giant heart. Armed only with missiles and your basic cannon, you manage to take it out with ease. You blast out of the hive and into deep space, unsure where to go and what to do with the dwindling physical and mechanical resources available. You cut off the power and simply float, leaving only the reserve power systems running. You sleep for the first time in days. 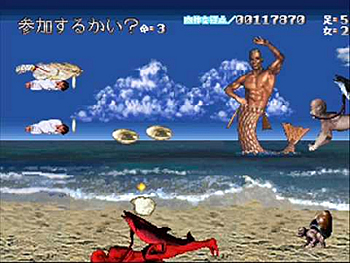 You awake to wild beeping on the computer. There’s a wormhole dead ahead! Knowing that your options are slim, you take the gamble and plunge into the portal.

When you pass through on the other side you see a planet to set down on. There may possibly be resources to be culled from the surface. You descend through the atmosphere.

You realize that this planet is safe. Blue skies, clouds, green surfaces – it reminds you of the Earth pictures you saw in the data archives as a child. You’ve always wanted to visit a planet like this; Gradius is a dour sphere of rain and gray skies. You coast along the plains in search of a place to settle down. In the distance, you see what looks like giant mountains. On closer inspection, however, they appear to be giant people! There is life on this planet.

As you get even closer to the figures, you see that they are actually giant, muscled men in Speedos. They attack, and it appears the fight will never end. What is this strange wacky world?!