Pat Longo is a groovy guy – an accomplished artist, musician, DJ, record aficionado and family man. You might see him spinning vinyl at a local soul night or catch his band opening up for Archers of Loaf or just riding bikes with his son Hank in the Heights section of Jersey City. He’s that guy with a shine in his eye that says he has something cool he wants to show you. Let it be known that everything Pat shows you is pretty cool.

In this case, Pat graciously allowed Unwinnable into his home so he could show us his Batman records.

To say that Pat Longo is a record collector would be a misstatement. A collector hoards things to keep them in boxes – it is about accumulation and completion. Being that Pat is a DJ, he wants to use the records he collects – he brings them out for others to enjoy. It’s about teaching, not collecting.

Pat greets us at the downstairs door of his Jersey City home and leads us through to his studio. Like old books, old records have a distinct odor and the studio is thick with it. Shelves of records line both long walls of the room. All the 12-inches have foggy plastic sleeves on them. On top of the shelves are boxes full of 7-inch records. On my right, the boxes are hand-labeled with a Sharpie marker  – Reggae, Latin, Soul, Funk, R&B… On my left are the labels Psych, Garage, Instrumentals and Punk. Two boxes are labeled “In case of fire, grab this box!” and “In case of fire, grab this box…too!” 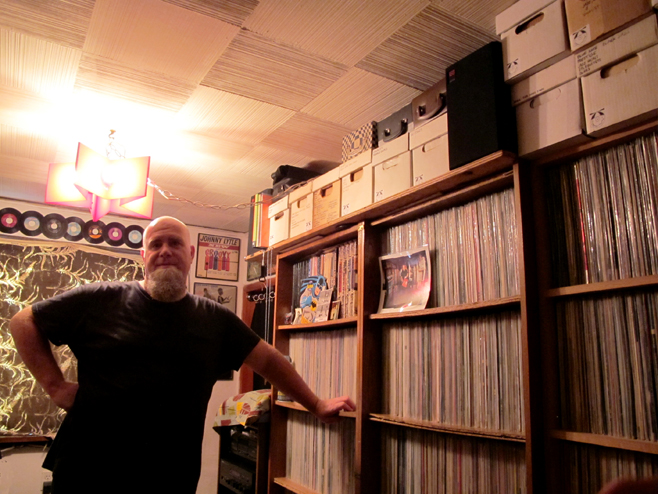 Pat produces a metallic gold box and opens the lid. On the inside of the lid is the original logo from the Batman TV show. Above the Batman logo is a name scrawled in marker: Martin Prince.

“Who is Martin Prince?” I ask.

“I dunno, that name came with the box,” explains Pat. “I put that sticker on there, because that is the Batman box.”

I sip a Dunkin Donuts coffee and Pat has some tea. Stu Horvath, camera in hand, drinks water. It is 11:30 on a Sunday morning and class is in session.

Pat pulls records out for us and takes the cover off his record player as he begins an aural history of the Batman theme.

Pat pulls records out and takes the cover off his record player as he begins an aural history of the Batman theme.

Batman hit the small screen in 1966 and its theme was a surf rock number composed by American jazz musician Neal Hefti. Hefti had found success as an arranger for Count Basie and worked as a film scorer for several Hollywood film and television productions before ABC hired him to compose the Batman theme, a standard 12-bar blues progression with one word of lyrics: “Batman!”

The song was a smash, becoming one of the most popular songs that year and the most-covered TV theme song ever.

Pat has a lot of weird Batman records. Some records are legit versions of the song, some are just strange. Some merely have the word Batman on the front of the record and have very little to do with the campy Caped Crusader at all.

A favorite is the Music for Batman record. The cover of the album has images of the iconic characters;  Batman and Robin, as well as Joker, Penguin and Cat Woman. It is a very good representation of what Batman is. However, when the record goes on, it sounds like ’60s Las Vegas grind – hip-shaking stripper music. It’s the kind of music they might have played on an episode of Batman (probably one with Julie Newmar) but certainly not the familiar song known around the world as the Batman theme.

Some of the records are awesome just because of the artwork.

For example: “Abuelita de Batman,” or, in English, “Batman’s Granny,” by a band called Botellita de Jerez. According to Google Translate, that means Bottle of Sherry. I have no idea what to call their genre of music. You might call it Latin Mess. The song is pretty awful, but the LP’s cover is totally badass – a photo of a Batman-inspired mural in some Mexican basement.

Pat puts on “The Riddler,” a song sung by Frank Gorshin, who played the Riddler in the original series.

Also very interesting is the Maxwell Davis version and arrangement of the Batman theme. Rather than tempt fate, he called the song “Lawyer Fraud.”

The list goes on and on. Pat gives us an hour and it was surprising to see how much influence the Batman song had on so many artists – and we heard just a portion of the Batman records, let alone his entire record collection.

So what drives a man to collect Batman records? Pat isn’t someone who collects comics. Believe it or not, there are people in the world who don’t know the ins and outs of the DC Universe. Having always been fascinated with the song, Pat already had a few versions of it by the time his son Hank was born. Like most well-adjusted parents, Pat and Allison would play music and dance around with young Hank. The Batman song always made Hank happy. It was obvious, at this point, that Pat was going to need more Batman vinyl (not that he really needed an excuse).

I have, lately, noticed a trend in what drives geek culture: children. People make games for their kids, they draw pictures for them and they play music for their children. It is all about the upcoming generation, for us to teach them well, so they grow up to be at least as cool you as you are. 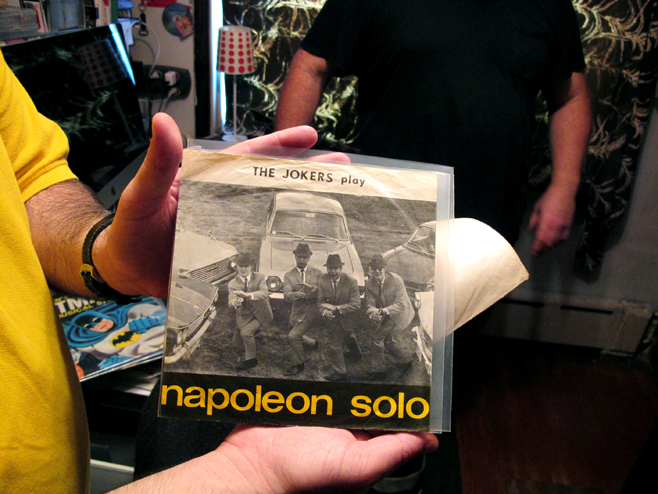 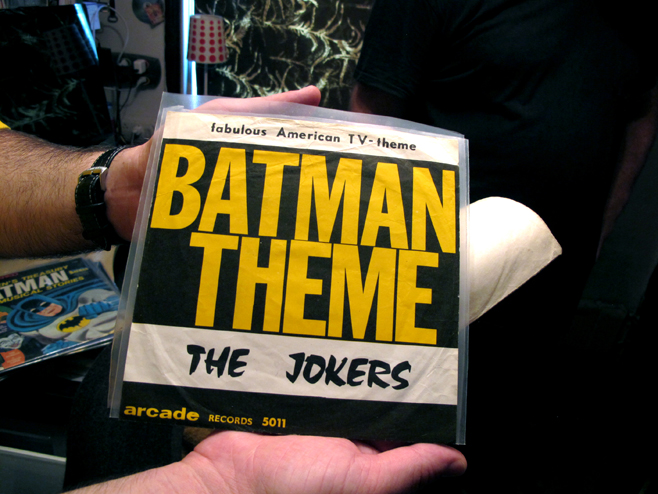 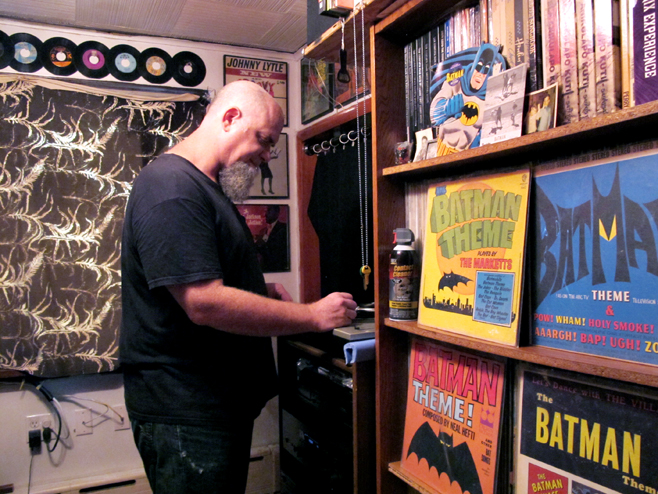 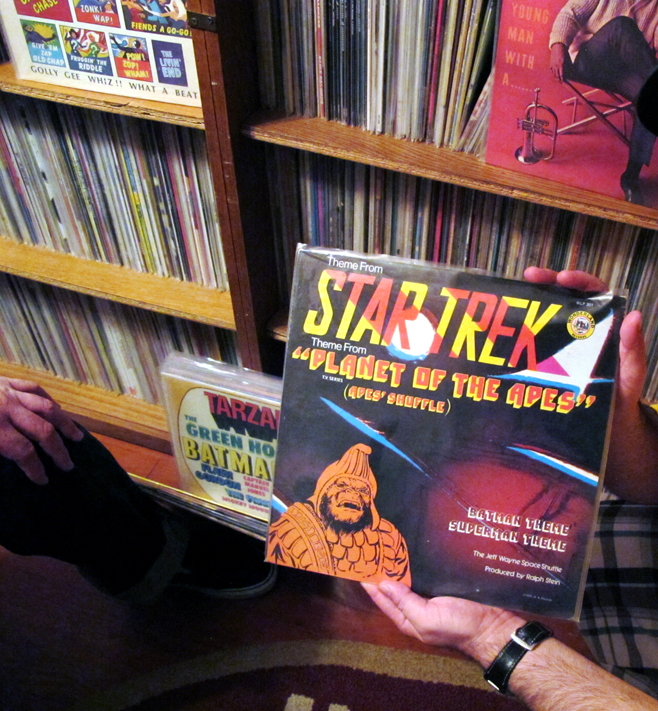 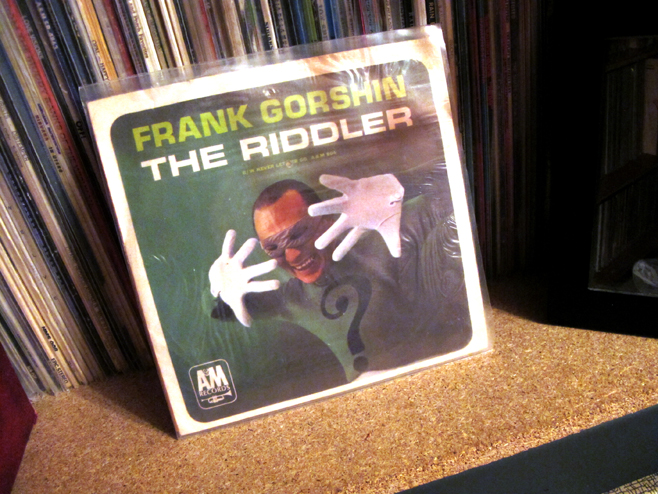 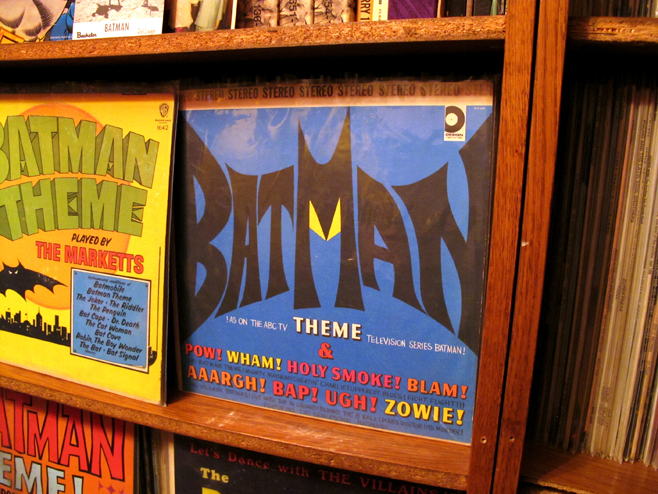 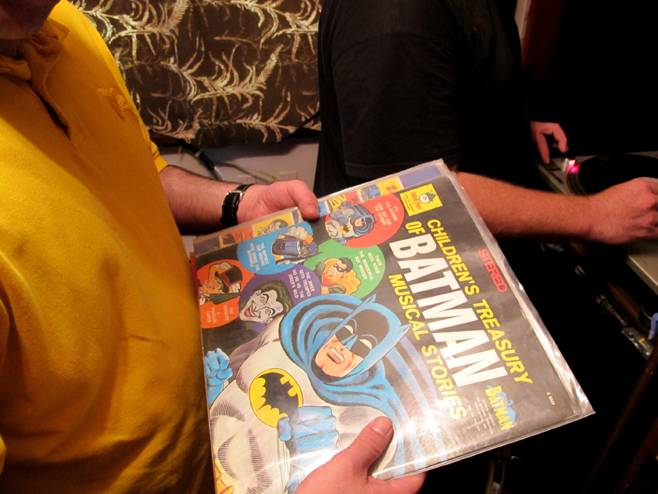 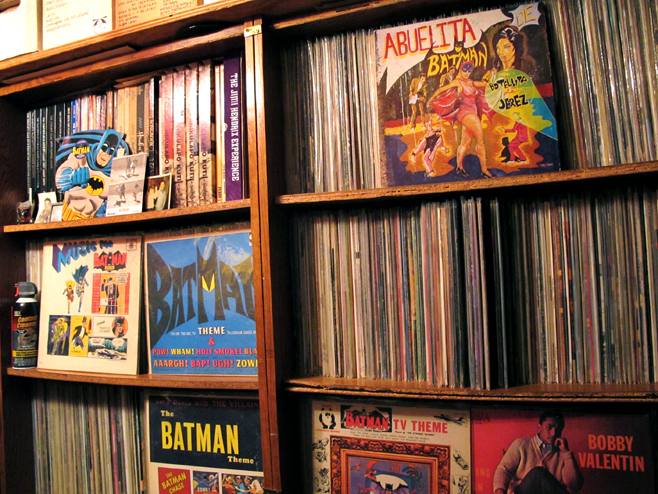 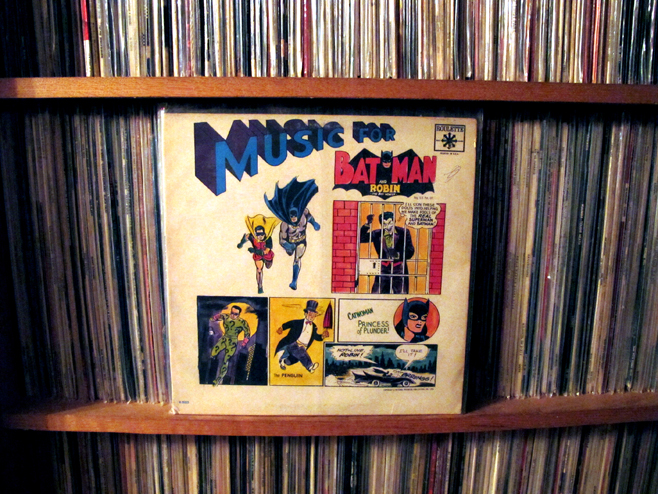 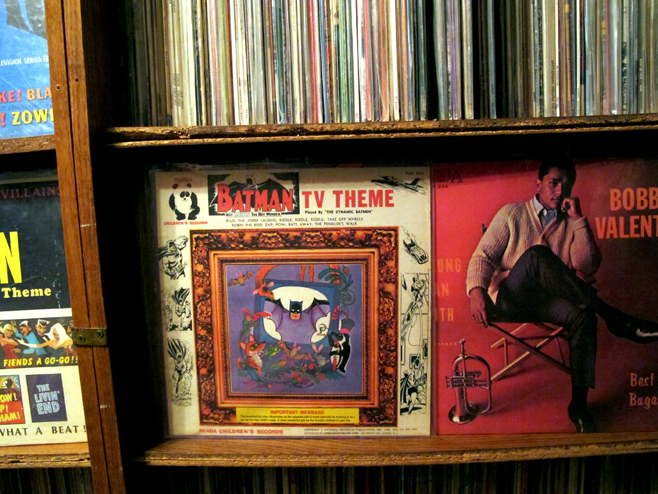 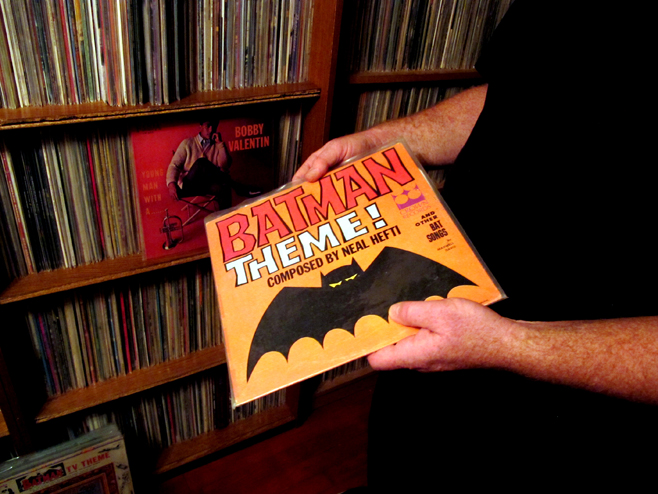 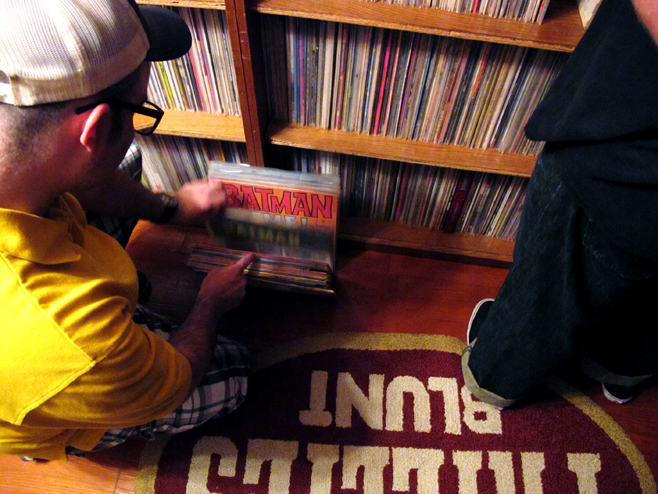 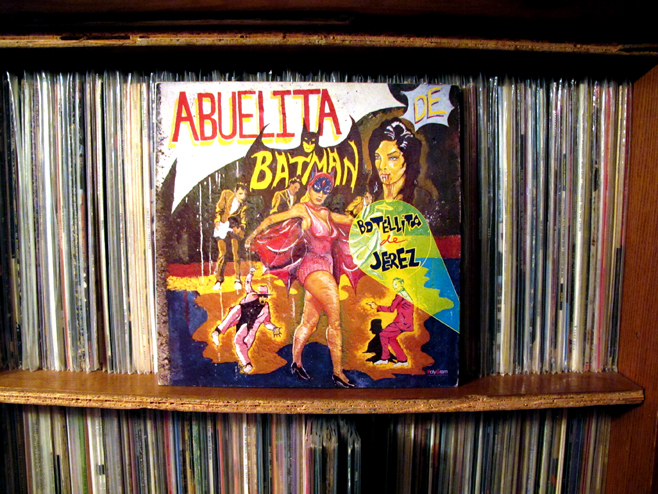 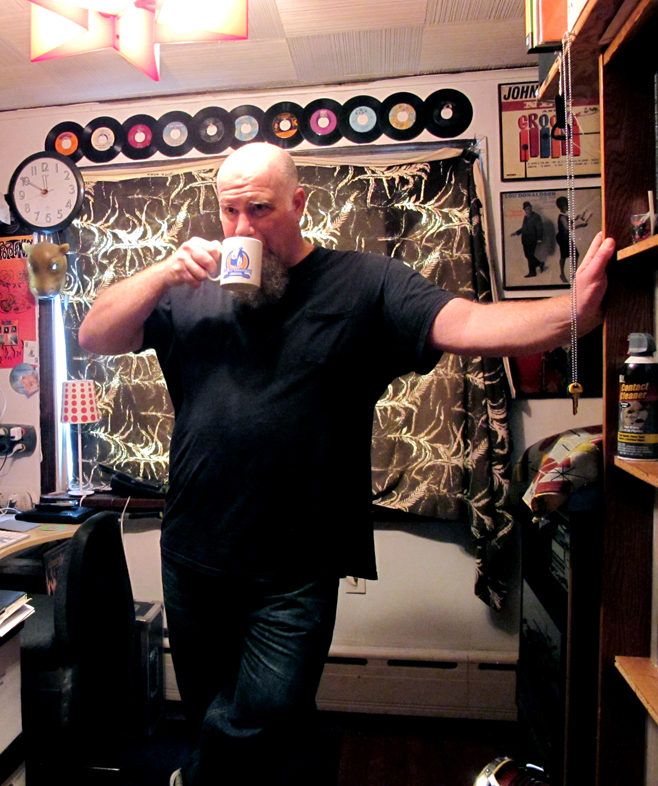 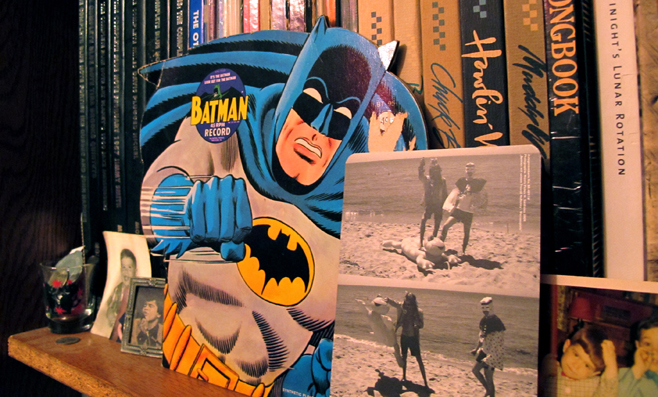 Pat is always happy to talk about music and records. You might see him at a record swap or hear him occasionally on WFMU. Be sure to check out Pat, as well as other collectors and their collections, on Dust and Grooves. They are working on having a Kickstarter for a book showcasing some of the biggest and best collections in the country.

Pat’s personal DJ blog is Primitive Sound System and he spins at D.C.’s Tavern in Hoboken, New Jersey, every first Thursday of the month.