We at Unwinnable have to be brutally honest with you, dear reader: we weren’t entirely sure about running this “booth babe” gallery. (We like to think of it as a “Chuck” gallery, actually.)

In theory, employing “booth babes” ought not be so problematic, I think. Women – and usually attractive women – are hired to sell a product. These women are often actors and models, paid to be as pretty and articulate spokespeople as they can. Maybe that shouldn’t be a problem.

In application, though, the concept of the “booth babe” is enormously problematic. I recall this horror story from E3 2006 – and by now it’s basically apocryphal, because I can’t remember who told me this – but this guy’s friend approached him on the show floor and commanded, “Smell me.” She had been employed as a booth babe that year, and she pointed to her bare shoulder. “Smell me,” she said. He sniffed. Her shoulder was rancid, apparently from men tossing their sweaty armpits across her shoulders all day.

“Booth babes,” particularly when they are abused in photographs, demonstrate this unsettling power dynamic wherein what the average nerd-off-the-street wants is irrationally more important than a spokesperson’s dignity. That is why booth babes are problematic. Even the language we use to describe them – “booth babes”? As if they are another species altogether? – ignores who they are and what they are actually employed to do.

When I attended E3 in 2005, I took a lot of photographs with “booth babes.” I approached them as a peer – I myself was wearing a tank top with, lettered in rhinestones, the name of the website I represented – and the photographs we took together were hilarious. Then I asked to see the games themselves, and these women, relieved, went into their spiels. 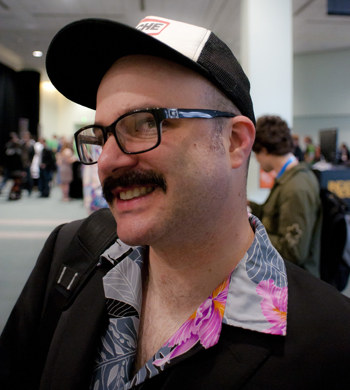 Some were better than others, but nobody was inept. At worst, the women are the equivalent of waitstaff, reciting a menu. At best, they are spectacularly adroit PR, hamstrung only by their own good looks. That year I learned that, if you want to uncover privileged information, begin with the woman at the booth.

At another event, where I represented the same website, I was being harangued by a man my age and his crowd of friends. Finally I asked him whether he understood I was employed by the website as an editor, and oh, if you could have heard him apologize.

Yes, “booth babes” have it rough. And then there is Chuck. Oh, boy, there is always Chuck.

I’m not sure what it’s like, as a paid spokesmodel, to see Chuck Moran marching toward you. First of all, the guy pairs suit jackets with camouflage cargo shorts. He’s got a ball cap and a mustache. What is a girl supposed to think?

We here at Unwinnable have a laser-honed sense of irony, I believe, and in the interest of social responsibility, we are required to deconstruct Chuck. Except that the images kind of speak for themselves. “Hey!” I picture him introducing himself to some strange woman. “Would you please point the barrel of that gun toward my face? This is for work.”

Well, we all have jobs to do, I guess.

Here is the thing about Chuck. In a world where we worry about how women are demoralized, made to lack dignity, one thing we can count on is Chuck: he has zero dignity. We here at Unwinnable absolutely adore this photo gallery because the women really do come out on top. After all, there’s also Chuck. There’s always Chuck.

And I do believe, whether we post “booth babe” galleries or decry them, either one, we undermine the type of work these women are doing. Maybe the problem is less to do with “booth babes” and more with how we all choose to cover them.

Probably this is a controversial tack for me – of course I believe there ought to be more “booth dudes,” too, because nothing can sell me on a game like a handsome brah – and probably I ought to work harder to stop objectifying everyone.

Till then, though, I hope we can agree on just one thing: Chuck is fucking hilarious.

P.S. If anyone is wondering what Chuck did the Sunday following E3? He attended the Tony Awards with his wife.