The transparency of DC’s decision to create a line of comics entitled Before Watchmen is not lost on this reviewer – it’s purely a money-making scheme. The name recognition alone will generate a bevy of sales for DC. So, in picking up Minutemen #1, I’m reminded of all the fans of the original Watchmen series who are boycotting it and all the supporters of Alan Moore who are hoping DC goes and pounds sand on its new venture.

In the end, I think they’re missing out.

Is Minutemen a great comic? No. It has flaws, mostly from using the pre-established characters in Moore and Gibbons’s epic work, but it also has an interesting narrative and a writer who cares deeply about telling a compelling story. I can’t fully praise Minutemen, but I can tell you that it works. And if you’re averse to reading it, I urge you to give it a chance. 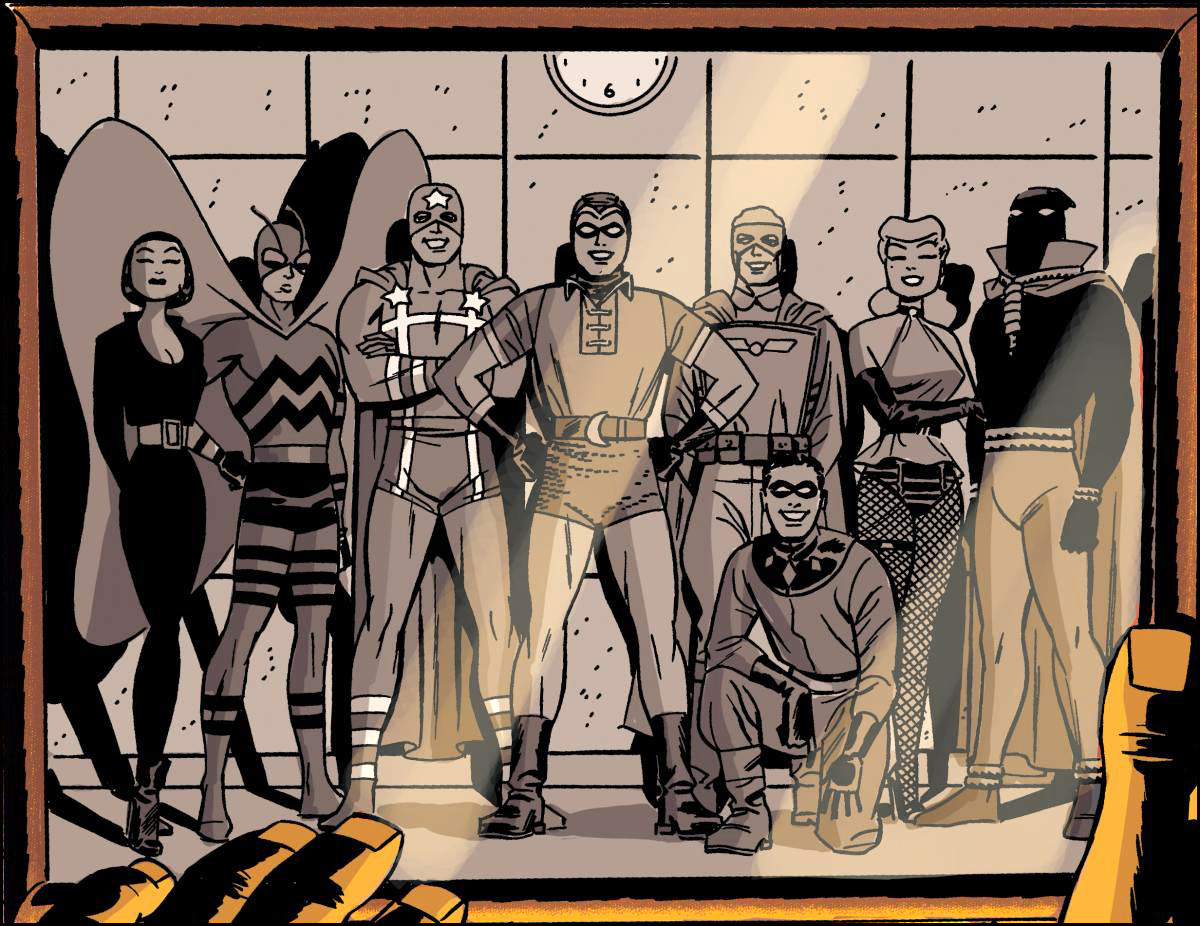 Writer Darwyn Cooke employs a strong narrative voice in Hollis Mason, the original Nite Owl. Told from Mason’s perspective as he experiences and then reacts to the introduction of heroes, readers are given a more intimate view of the genesis of the Minutemen. Cooke also pays attention to the minutiae of the story as minor moments are referenced in later parts of the comic. The deliberate narrative voice Alan Moore used in the original Watchmen is present here and, while the panel construction is not as intricate, it is still as meticulous and systematic as its predecessor.

My complaints come down to two characters in particular. Mothman and Comedian rely on their pre-established personae so heavily that they feel like caricatures of themselves. Comedian in particular is so overplayed that I was reminded of Tommy Lee Jones’ Two-Face in Batman Forever, really a shell of himself rather than his own entity.

Darwyn Cooke’s illustrations, however, are fantastic. He has a simplistic style, like Michael Allred in iZombie, but the drawings have a more Golden Age feel to them. Characters are blocky and the detail found in modern comics is eschewed for a sparser visual. Shadows are heavily used, as are flat colors found in older comics. Color fades, in particular, are rare in this book and the composition is worthy of note as it aids the narrative voice Cooke uses to tell the story. A fan of the original series can get lost in this new iteration – and be pleased with what he sees. I can’t lie: the opening images -particularly those of Dr. Manhattan’s forehead and the references watches – made me giddy for what I was about to read.

I feel bad for Darwyn Cooke. He’s produced a comic that is heartfelt and streamlined. The pacing is well constructed and the characters are intriguing. The problem is that DC is messing with the Holy Grail of comics and, despite Cooke’s efforts at creating a comic that has merit on its own, many readers will still pass on it for personal biases. I respect them, but I also wish they would be more open, because Minutemen is what you’d hope for a prequel comic, especially as a fan of the original series. 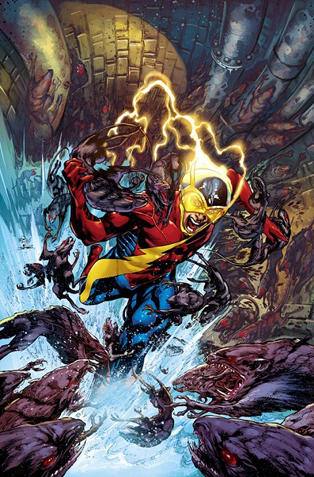 James Robinson expands on the world he introduced in issue #1 of Earth 2, getting readers acquainted with the new Flash and the new Alan Scott. While the issue isn’t a home run, it’s got some cool moments and some great art. It is a good beginning for what could be one of DC’s most interesting series to come out of the New 52.

Robinson spends the majority of the comic on Jay Garrick and where Garrick seemed like a big loser in the previous issue, he embraces the roles of a hero, albeit reluctantly, in this issue. His conversation with the speed god Mercury is very reminiscent of Hal Jordan’s conversation with Abin Sur in Green Lantern. Much like Hal, Jay is handed a power he doesn’t feel he’s ready nor suited for, so the following issues should be interesting, as the moments that work best in this comic are those where Jay uses his speed abilities to help people.

While we have yet to see Alan Scott as a Green Lantern, his moments in the comic fail to help define him as a character. DC decided to make Alan Scott gay in its New 52. While I have no problem with this, I feel that his character was poorly handled. It’s evident that James Robinson is trying very hard to show that a homosexual relationship can be the same as a heterosexual one, but the dialogue between Alan and his boyfriend Sam feels disingenuous. It’s a bit too over-the-top to be taken seriously. His boyfriend has a romantic getaway planned, and while they’re on their way, Alan proposes. Every moment is a reminder of just how awesome this gay couple is, complete with shots of their friends smiling and waving like they’re saying “We’re okay with this!” The relationship feels hollow and forced, though. It’s clear Robinson doesn’t know how to write dialogue between two men who are in love with each other. His heart is there. He wants readers to buy their love for each other. The execution is where he falls short.

Nicola Scott’s best work occurs in the scenes involving Jay Garrick. When Garrick transforms into the Flash, Scott perfectly illustrates the frantic motion Flash fans associate with a character who can move faster than light. Alex Sinclair and Pete Pantazis’ colors make the images come alive. Mercury, who radiates golden light, is beautifully depicted, and when Jay puts on the costume for the first time, I couldn’t help but notice how much it stands out on the page.

Despite its flaws, Earth 2 is a pretty good comic. It helps establish the multiverse and a world where heroes are rare (considering its big three died in the first issue). While I didn’t like Jay Garrick’s character in the first issue, I see where Robinson was going with it in this issue. Similarly, I’m excited to see Alan Scott finally become a Green Lantern, even if his ring is powered by magic. All in all, Robinson delivers on a series that is meant to be a stepping stone between worlds and between iterations of the same heroes. 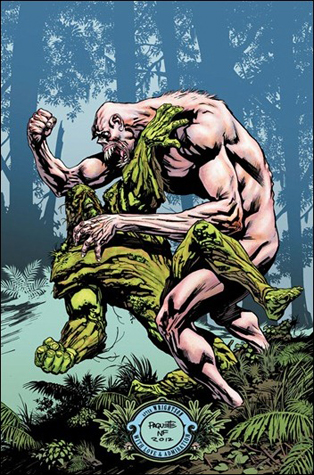 Bannen’s Book of the Week

Anton Arcane is probably best known to fans of the original Swamp Thing series as Alec Holland’s greatest nemesis. Snyder has coolly kept this hand close to his chest, waiting for the right moment to reintroduce him. Snyder chooses a time when Alec is at his weakest, and the results are painful and glorious.

The circular narration of Scott Snyder’s story is the greatest asset to this comic as I found myself turning back to page one as soon as I got to the final panel. The entire issue takes shape as soon as readers understand the final moment in the issue, and see how it relates to the beginning. Scott’s characterization, specifically his moments between Alec and Abby, are the heart of the comic. Alec is at his physical weakest, and now that he’s traded his human form for the constant form of the Swamp Thing, his ache for Abby is palpable. They have a pretty touching scene together in which Alec realizes he’s leaving Abby vulnerable and, despite his physical condition, their romantic connection is tangible.

Francesco Francavilla’s art is nowhere near as detailed as Yanick Paquette’s, but this doesn’t mean the comic is a visual letdown. In fact, Francavilla’s colors are some of the best I’ve seen in the series. His red shadows, in particular, add a layer of crazy to the already disturbing-looking Anton Arcane. He has a simpler style than Paquette and, much like Darwyn Cooke, Francavilla utilizes smoother illustrations for his characters. Panels aren’t separated by natural breaks but rounded edges that give the whole comic a retro feel, hearkening back to the ’70s when Arcane was first introduced.

Scott Snyder is DC’s ace right now. Between Batman and Swamp Thing, and his work on Vertigo’s American Vampire, Snyder crafts incredibly detailed stories that utilize strong narration as well as creative storytelling. If anyone was skeptical he could bring back one of DC’s most popular and most esoteric characters, he should be swayed with issue #10. If not, a reader is foolish to avoid this series.