The “Night of the Owls” tag on the cover is misleading, as the issue has only a minor connection to the current story arc in Batman. What the annual attempts to do is reintroduce Mr. Freeze by adding some familial depth to the character. The story, while a bit clichéd, is structured around a plot involving Freeze and Batman, but it’s written in a way so that it begins and ends what turns out to be a pretty cool comic. 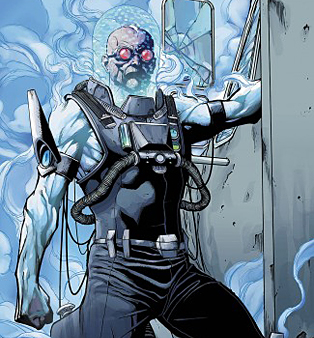 Longtime fans of Batman already know Freeze’s backstory, so nothing new is introduced there. What readers get, however, are flashbacks to Victor’s past, including some creepy moments between him and his mother. Freeze also shows readers some new powers (like sucking in mouthfuls of water and spewing them out as frozen ice sprays).

While the action sequences are good, the prologue and epilogue of the comic are the best moments. Victor’s interactions with his mother begin and end the issue, and while I can’t say they’re particularly original, they humanize and demonize him at the same time. Even from his early years, Victor was a disturbed person. His love of ice is explained and it ties in directly with his continuous attempts to keep his love, Nora, preserved in it.

Jason Fabok’s sharp art is reminiscent of Gary Frank’s. His character faces are similar in style, lightly inked and beautifully colored. His Mr. Freeze moments are the best parts of the comic. The only oddity I noticed is that Fabok doesn’t depict much action. The moments where he does are impressive, particularly the small panel of Batman flying through a glass window. But since the majority of the comic is character development, Fabok doesn’t really have a need to draw movement the way Stefano Caselli does in Amazing Spider-Man.

That said, I love his character designs. Fabok’s Freeze is punkish-looking (with his mohawk hair) but definitely imposing. His Batman is similarly ferocious, and his Penguin is classic in design. 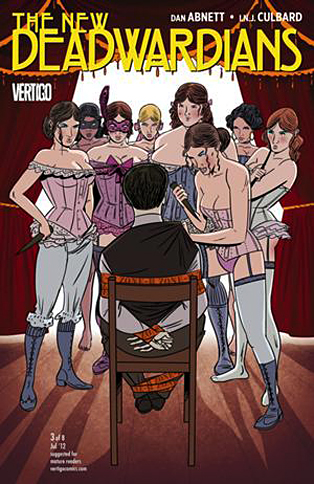 Dan Abnett’s vampire story continues with an issue that is more about developing its hero than it is about moving the plot along. While readers aren’t any closer to revealing the mystery of its mysterious deaths, there are some great moments involving Chief Inspector George Suttle and his connection to the human world in which he lives.

The comic lacks any action, so Dan Abnett focuses solely on building character and informing readers of the differences between George Suttle and any other vampires he may encounter.

While the story doesn’t progress much by the end of the comic, it does give readers a better understanding of the world in which Suttle lives – both physically and emotionally. His time with the women of Sidney Street is essential for helping readers understand that while Suttle is a vampire, he isn’t proud to have eternal life. The shame and pain he speaks of are sad and palpable.

I still think I.N.J. Culbard’s art is perfectly suited for this type of story. Since the world in which Suttle lives is all about simplicity, Culbard’s simple and unadorned art stylings help sell a world devoid of decoration and flourish. This is even more useful in the scenes between Suttle and the harlots of Sidney Street. Even though the characters appear somewhat nude, the visuals lack any sort of eroticism. This helps readers understand Suttle’s predicament as a vampire – he cannot be interested in women because he lacks the blood to do so. It’s an interesting dynamic explored in the comic.

Abnett’s writing is crisp in this issue. While the ending feels a bit abrupt, it leaves the door open for Suttle to do some damage to the thugs who attack him. Even though Suttle looks weak, I have to believe that he’s stronger than he appears. Either way, I love The New Deadwardians, and I can’t wait for the story to continue in issue #4. 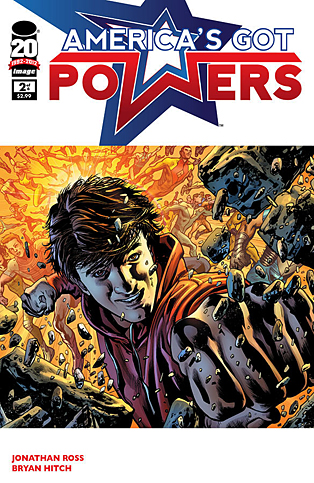 Bannen’s Book of the Week: When we first left Tommy Watts, he had just displayed his powers, an especially unusual talent considering that Tommy has none. Issue #2 of America’s Got Powers picks up where #1 left off, but it adds to the character conflict, as most of the time is spent on introducing readers to its cast rather than loading on the action.

Whereas issue #1 was pure energy, issue #2 slows things down so that readers can get to know the characters. Less time is spent on the evil marketing machine, and more is spent on the hero of the series – Tommy Watts. Tommy’s display in the arena garnered him national attention, but now he’s hesitant to use his powers (plus, he doesn’t really know how he activated them). But the show’s creators have a trick in store for Tommy, one that forces even his own mother to beg him to reenter the arena.

Ross and Hitch tap into America’s love of reality television and violence in this issue, reminding readers that the moments where reality TV are at its best are those where people are in their worst situations. The injury/death count in the comic is a sobering reminder of this. Very few people in this comic have a conscience, and those who do are being forced out in favor of violent entertainment the likes of Roman gladiatorial conflicts..

Bryan Hitch’s art is, once again, phenomenal. His character renderings are realistic, but not as realistic as Greg Land’s. There’s fluidity to the characters because they aren’t so bound by realism. Instead, they have a bit of a cartoonish nature to their design. Much of the story is told in splash panels. This gives Hitch the room necessary to depict both disorder and harmony, particularly those scenes that offset each other, like in the training arena and those involving Debbie and Tommy. Their romance is given life by Bryan Hitch’s art.

For such a big book, America’s Got Powers is an economical buy. For $2.99, readers are given a helluva lot of story, as well as clean, lucid art – despite its chaotic nature. Ross and Hitch perfectly capture the balancing act between reality television and scripted violence, all in the name of ratings and advertising revenue. The kick at the end of the story is an even greater bonus for making this distinction, and Hitch and Ross deserve a lot of credit for crafting what is truly an original story.