Forget everything I said two weeks ago.

Only now have I seen the true face of modern-day, first-world video game sloth.

It’s far more insidious than I ever would have guessed.

And it’s coming for your children.

Draw Something [iTunes link] (and its free counterpart, Draw Something Free [iTunes link]) is a fun and easy iOS game – essentially a sketch artist’s spin on Words With Friends. But there are those out there who would rather play dictionary than Pictionary – and they’ve devised a form of cheating so rank, so vile, that it threatens to rock the world of casual gaming to its very core.

It’s not hard to grasp the concept behind Draw Something, a game designed for kids that couldn’t be simpler to participate in and win. Choose a word, draw it as best you can, then send it off to a friend or random opponent – and see if they can guess the word. After they take a stab, they draw something and beam it back. 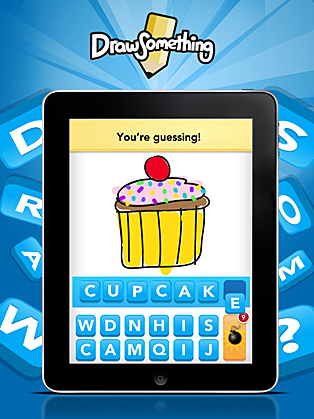 Except there’s a sinister side to this otherwise noble endeavor, one which you might already have guessed, and which reminds the Rookie of the Year a bit of Chatroulette:

There are players out there who are so epically lazy, so artistically disinclined, that they choose to send you not a drawing, not even a pictogram, but the actual word itself, handwritten on the screen in chicken scratch.

If I’d seen this in practice only once, I’d have laughed it off. Twice, and I might have chuckled at the random coincidence. But no. I am seeing it time and time again.

And, as it spread across my wireless network like a virus, it soon left me with only one course of action – to uncover the truth behind this insidious practice, and for the benefit of the gaming world I so diligently serve, to strike back.

With my reporter’s fedora firmly affixed to my brow, I used the power of the Internet to contact the developers (admittedly, it helped that I already knew them), to find out once and for all if they’re aware of the issue – and if they have plans to combat it.

The following is the fruit of that effort: The first-ever exclusive Rookie of the Year interview, with OMGPOP producer Brianna Klemm.

Rookie of the Year: Are you and your fellow developers aware that some Draw Something players are cheating by writing out the words instead of drawing them?

Brianna Klemm: We have seen this behavior and obviously we are very concerned.

ROY: What, if anything, are you planning to do about it?

BK: We have reported it to the authorities. And by authorities I mean The Party. So, Cheaters: You might wanna back up your hard drives.

ROY: Do you have a message for those users who are bucking the system in this way?

BK: Cheater, cheater, pumpkin eater. We will hunt you down and give you the worst swirly ever. Watch your back.

And there you have it. OMGPOP is aware of what you’re doing, and they are taking swift and decisive action to make you wish you’d played by the rules, and to force you, as your hard drive is erased and/or your head is thrust into ice-cold toilet water, to think twice about ever cutting corners again, via your smartphone or otherwise.

On second thought, maybe America’s gonna be OK after all.

Cheat at your own peril.

Matt Marrone considered drawing this column instead. But writing it out was just so much easier. Follow him on Twitter @thebigm.

Rookie of the Year: Use Your Allusion