I am turning 30 (tomorrow? yesterday? 2/15/2012), so I’m going to allow myself some indulgence and I’m going to talk about adolescence a bit. Say you’re at a bar, or something, and someone asks you what you do and you rattle off your usual answer which is a combination of your day job and, oh, yeah, you freelance. And then they ask what you write about, and you say “videogames” and they think it’s neat and would like to know more but you’re a little drunk and in the beginning stages of an anxiety attack.

On one level, it’s figuring out what experiences you share: everyone has these different personal universes and getting to know where the overlaps are is a key part of the conversation because you don’t want to be the person who pontificates about their area of knowledge. Or maybe you do. I don’t. It is also being acutely aware that the hours you spend thinking and talking about games has drilled into you a jargon and a thousand little things you take for granted – things upon which your opinions and observations build.

And then you start questioning – does what you’re doing have any relevance beyond the small universe you exist in – and this is very uncomfortable and leads to a lot of indulgent soul-searching.

But how about a different kind of reliving of adolescence?

Starting point: a worldview in which being an adult is defined by taking responsibility for your actions. I’m not going to unpack that any further because I can only go so far down and describe so many turtles and stay readable (I know it’s definitely part of masculine adulthood). But let’s say that since the invention of childhood, – which involves, by and large, not being responsible for your actions – that when adulthood is the acceptance our actions have consequences, it’s not difficult to see actions without consequences as not-adult. Childish, even. It’s the unspoken assumption in every “games are for kids” argument or moment of insecurity, that action without consequence is a childish thing to be put away.

I think the obsession to give game actions consequence is one way of games trying to “grow up” within that worldview: Molyneux locks down your Fable save so you can’t unmake a decision. Other games lock you into one of the decisions you’ve made (even though you can reload a save) but it’s weird in games, which can and do contain all of these possibilities, to lock you into a single chain of cause-and-effect sequences. The world created is one where the important choices are signposted and the outcomes have been hinted at so you know what you’re choosing (and how often in life is that the case? In shopping, sure.)

Released in 2003, Prince of Persia: The Sands of Time is a game about growing up in that worldview. Its limited-use time-rewind mechanic means you have a few chances to get things right, but eventually you have to accept the outcome of what you’ve done. 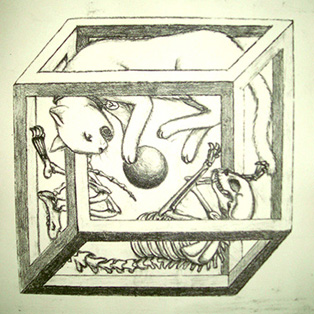 But it’s also about gaming, embodying within its story and its internal mechanics that thing that games do so well: the do-over. You can still continue and reload saves and not have to deal with permanent failure, but the game itself offers that within its mechanics (I suppose one could make an argument that saving and reloading are also mechanics, and that would be an interesting discussion, but, again, turtles).

The key is, the Prince sees the results of his glory-seeking behavior (the destruction of the palace, the death of his father) through to its conclusion and learns from it. He’s an acrobatic, Middle Eastern George Bailey, learning from the way things could have turned out. His actions, ultimately, do not have consequences. And that’s key to his growing up.

What if a narrative game showed you all possible outcomes (through actually playing each of them)? What if the weight of our decisions came not from their actual consequences but from comparing the differences between them? The form embraces its inherent lack of consequence, challenges the notion that this adolescent characteristic is something to be avoided. It’d be difficult, not the least because it’d require jettisoning the idea of the canonical story, which would make it much more difficult to produce a sequel. I, for one, would not miss canon-as-marketing-tool-to-get-you-to-buy-DLC-because-hey-it’s-part-of-the-story. Or, really, any concerns with canon.

A decision-heavy game like Mass Effect creates its narrative through a juxtaposition of what-ifs – you make the renegade and the paragon decision, a multiverse within one playthrough. RPGs and GTA quest-lines already function this way, sort of: encapsulated from one another in specific segments but approachable in any order. The key would be adding meaning between the quest-lines, a montage theory for actions, not film shots.

A multiplicity of Brian Taylors can be followed on Twitter @BrianMTaylor. Schrodinger’s Cat illustration by Jie Qi.

An Appreciation of Attention to Detail