Last year, we lost the legendary comic book creator, Joe Simon. Much more than one of the last living links to the Golden Age of comic books, Joe Simon was a vital contributor to the essence of American popular culture. A few years ago, when Marvel Comics killed off Mr. Simon’s best known creation, Captain America, he remarked, “It’s a hell of a time for him to go. We really need him now.” The same could be said of Joe Simon.

Shortly after his passing, I received a copy of Titan Books’ The Simon & Kirby Library: Crime. The deluxe hardcover is a treasure trove of pre-Comics Code Authority crime comics and serves as a personal reminder of just how vital Simon and his collaborator, Jack Kirby, are in comics to this day. 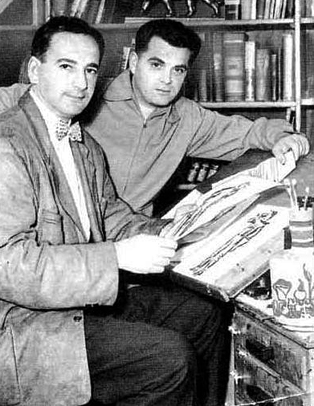 The stories in The Simon & Kirby Library: Crime, originally published in Clue Comics, Headline Comics, Police Trap and others, are tales of thieves, murderers and femme fatales – not the standard superhero fare that comes to mind when one thinks of Joe Simon and Jack Kirby. Together, they created Captain America, revamped the Golden Age Sandman and created DC mainstays like The Boy Commandos and Manhunter. The pair also created romance comics with their title, Young Romance. They were a powerhouse of a creative team. Their work in every genre still has an effect on the art form today.

In Crime, Simon’s tight scripts and Kirby’s vibrant pencils transport the reader into the realm of the 1940s underworld, the Wild West, the London Blitz, 1982 Chicago and more. They laid groundwork that paved the way for contemporary crime comics like Sin City, Criminal and Parker, as well as Alan Moore and David Lloyd’s dystopic V for Vendetta.

One story in this book takes a different look at Guy Fawkes. In V for Vendetta, Guy Fawkes is someone the main character of the book, V, looks up to. Here, Simon and Kirby portray him as a patsy in an assassination plot who is willing to kill for money and fame, like any other common criminal. The panels are packed with adventure and intrigue – very different from Moore and Lloyd’s take on the subject, but just as vital.

Crime comics are a fantasy world that oozes impulse gratification. While the overarching message of these stories is that crime does not pay, Simon and Kirby show readers a very tempting world. There are boatloads of money and you can get anything with brutal violence – at least until the G-Men come looking for you. Still, a lot of the characters in these stories seem to subscribe to the maxim, “It’s better to burn out than to fade away.” The protagonist of a story can fulfill his or her darkest desires if they’re willing to go far enough. Granted, most of Simon and Kirby’s stories ended with the cops killing or jailing the criminal, but they don’t shy away from what is most appealing in the life of crime.

Whether it’s Ed Brubaker and Sean Phillips’ Fatale or Frank Miller’s Sin City: A Dame to Kill For, crime comics offer readers a view into a world where most people would never dare to tread, and it excites and titillates them like no other genre can. Simon and Kirby’s work exemplified this by guiding their readers between the panels – both showing and hinting at a world so many secretly wish to be a part of.

Confessions of a ‘Downton’ Dude