As 2011 comes to a close, it is time for Team Unwinnable to take a look back at the comic books we read this year. Upon compiling the Best Of lists that came in, we’ve come to realize that there were a helluva lot of great comics this year, so much that we couldn’t keep the list at strictly 10. So here they are, Team Unwinnable’s 13 favorite comics of 2011. 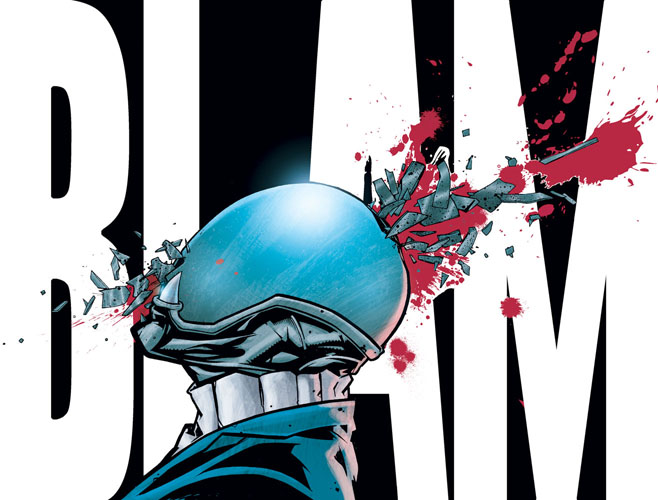 The Yo Joe Award – G.I. Joe Cobra # 11
The death of Cobra Commander was the first shocking moment of 2011. Chuckles spent the better part of 12 issues infiltrating the shadowy Cobra organization – after enduring Xamot and Tomax’s manipulations, Baroness’ threats and Cobra Commander’s speech about cognitive dissonance, the Commander gives Chuckles a rifle and orders him to kill his enemy. “Yo Joe,” Chuckles says, then turns the weapon on Cobra Commander.

Yo Joe, Chuckles. Yo Joe. 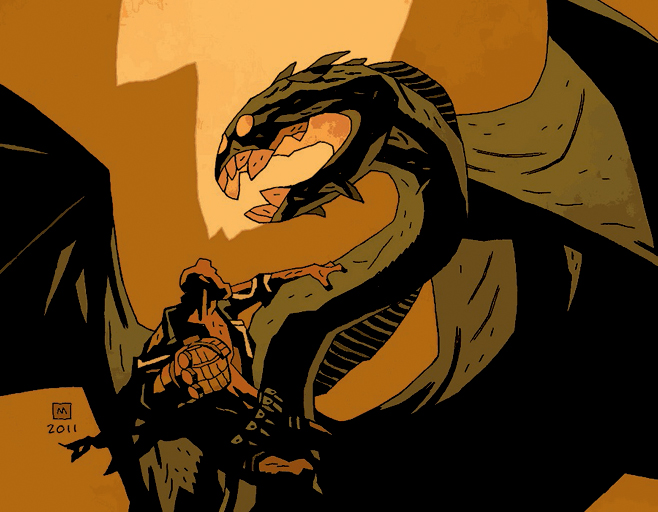 The You Knew He Wouldn’t Make It Award – Hellboy
It’s been quite a year for Hellboy. In 2010, he discovered his true parentage, relinquished Excalibur and gave the Baba Yaga his eye. 2011’s Hellboy: The Fury pitted Hellboy against the Queen of Blood, Nimue. Possessed by the Ogdru Jahad, Nimue took the form of a dragon and set out to destroy everything Hellboy ever cared for. With nothing but his left fist and the Right Hand of Doom, Hellboy took on the monster that’s been after him since Seed of Destruction. In one of the most epic battles comics have ever seen, Hellboy beats his foe, saves the world and dies. He went out how he lived – swinging.

Hellboy: House of the Living Dead, a sequel to 2010’s Hellboy in Mexico, is the tale of a hero learning to accept that he can’t save everybody. This served as a poignant postscript to Hellboy’s life, hitting all the right notes while whetting our appetites for Mignola’s return to the drawing board in 2012 with Hellboy in Hell. 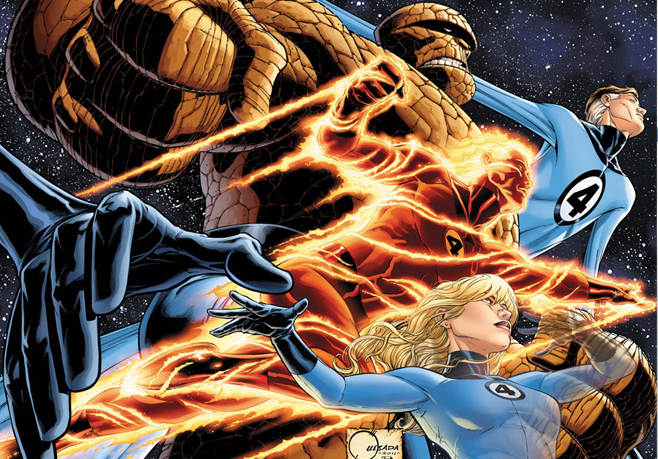 The You Knew He Would Make It Award – Fantastic Four #600
The World’s Greatest Comic Magazine is back and so is the Human Torch! The war that was brewing in FF is in full swing, but Jonathan Hickman and a slew of comics’ best artists give readers an anniversary issue that is the near-perfect distillation of everything that is, was and ever will be the Fantastic Four. Johnny Storm is back from the grave and the first thing he says isn’t something like, “I’ve been burning for a comeback.” No, the Negative Zone portal opens and the first person Johnny sees is Spider-Man in his Future Foundation outfit. Johnny stares for a moment and says, “Pete, what are you wearing?” 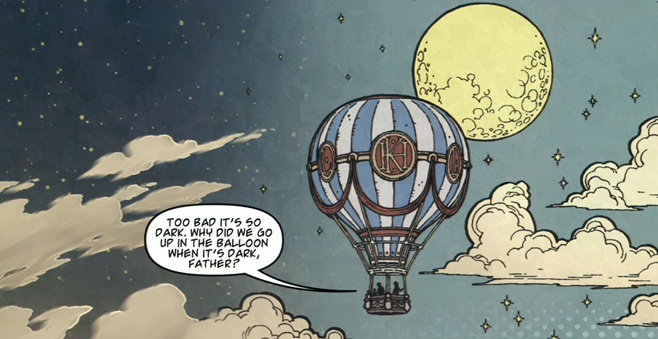 The James T. Kirk Parenting Award – Locke and Key: Guide to the Known Keys
There isn’t anything surprising about the main story in Locke and Key: Guide to the Known Keys. Any reader with a basic level of sophistication should figure out the broad strokes of the plot by page three. But, unlike the rest of the Locke and Key series, plot isn’t what is important in this stand-alone one-shot. What is important (aside of Gabriel Rodriguez’s always stellar art) is Joe Hill’s portrait of a parent struggling to protect a sick and dying child. Sure, it is calculated, melodramatic fare, but Hill and Rodriguez wield emotion like a razor. The last page is the most gut-wrenching moment I have come across in comics this year.

Granted, yours truly didn’t cry, but I have it on very good authority (read: hidden surveillance cameras) that everyone else on Team Unwinnable did…

The You’ve Got Red On You Award – Animal Man
Jeff Lemiere and Travel Foreman took the edict of DC’s New 52 to heart and brought Animal Man and his family to places they hadn’t been before. The book is a fresh start for Buddy and the Baker family and is very accessible to new readers. A mix of superhero, family drama and horror, Animal Man and his daughter are transported into a place called The Red. There Buddy Baker and his daughter Maxine learn of The Rot and the threat it presents to all life, both The Red and The Green.

Foreman’s art style matches Lemiere’s tone perfectly. The monsters in the book and The Red itself are otherworldly, while Buddy and Ellen’s kids, Cliff and Maxine, are damn cute. Animal Man is a perfect blend of genres – a must-read for comics fans.

The Makes Me Want To Dig Up the NES Duck Tales Award – Donald Duck: Lost in the Andes
Carl Barks is one of the greats. We all know this. If you do not know this, you should read this book and you’ll see exactly why he is so revered. Barks is at the height of his powers in this collection. Donald is constantly frustrated and exhausted. Huey, Dewey and Louie are the perfect examples of youthful exuberance. Then there’s Barks’ signature creation – Uncle Scrooge McDuck as the stingy old grump we know and love.

Full of humor, adventure and a small dose or two of social commentary, Donald Duck: Lost In The Andes is a fantastic introduction of this material to new audiences. Kudos, Fantagraphics. Kudos! 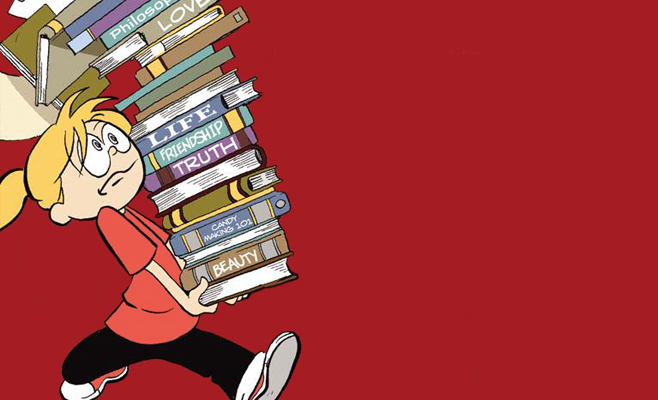 The Better Role Model than Starfire Award – Amelia Rules: The Meaning of Life…and Other Stuff
With his seventh book in the Amelia Rules! series, author and artist Jimmy Gownley continues to make a great comic that speaks to both kids and adults. The characters grow and age from book to book, which is what I love most about it. Throughout the series, they face real-world situations like divorce, being popular, friendship and death of a loved one – all being told through beautiful art, sublime page layouts and some of the best hand lettering in comics today. Pick up The Meaning of Life… and Other Stuff and you’ll see why Amelia rules! 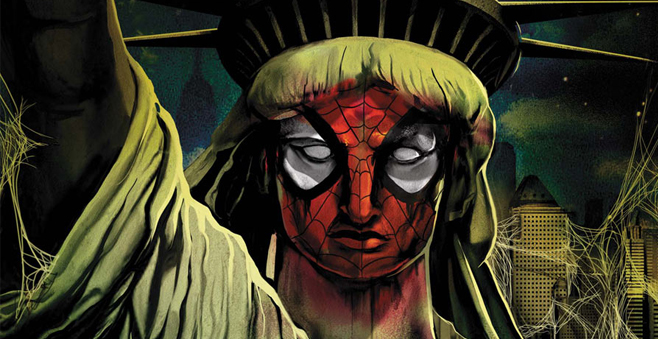 The Best Use of the Nineties Award – Amazing Spider-Man
Spidey has always been a favorite of Team Unwinnable. He’s the lovable loser that represents the best in all of us and this year’s run of Amazing Spider-Man has done an exceptional job of showing us just why we love Peter Parker – even the clone skeletons in his closet.

This year, Dan Slott, Fred Van Lente, Humberto Ramos, Marcos Martin and Stefano Caselli had Peter face off against the new Hobgoblin, suffer the loss of Marla Jameson and Johnny Storm, join the Future Foundation, put his science skills to the test and face off against the Jackal and a Manhattan full of Spider-powered miscreants in Spider Island.

Yes, Dan Slott and company dared to draw from the mess that was the Clone Saga and they told a damn fun Spider-Man tale.

It’s been the best year in quite a while for our friendly neighborhood Spider-Man and we can’t wait to see what 2012 brings.

The Yes, There Was A Daredevil Before Frank Miller Award
It’s so nice to see Matt Murdock having fun again. After the nonsense that was Shadowland and Daredevil: Reborn, it’s refreshing to see a Daredevil who revels in his abilities and knows how to crack a joke. Mark Waid’s take on Matt Murdock’s exposed identity is a lot of fun. Artists Paolo Rivera and Marcos Martin visualize Daredevil’s powers in ways we’ve never seen before. If this comic isn’t at the top of your stack every month, there’s something seriously wrong with you.

The Lack of a Crowbar Award – Batman: Brave & The Bold #13
This done-in-one tale is a study of one of comics’ most enduring institutions – Robin. Sholly Fisch and Rick Burchett deliver the perfect love letter to all of Batman’s kid sidekicks. Dick Grayson, Jason Todd, Tim Drake, Stephanie Brown, Damian Wayne and Carrie Kelly are called from across time and space by the Phantom Stranger to save Batman’s life. Do we really need to say anything else? 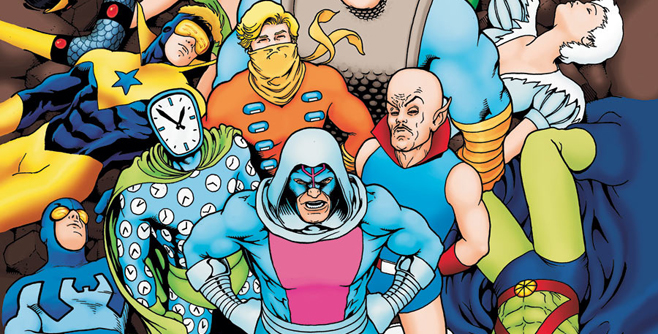 Goodbye to Bwahaha Award – Justice League RetroActive: 1990s One-Shot
I’m a huge fan of the legendary run of Keith Giffen, J.M. DeMatteis and Kevin Maguire on the Justice League/Justice League International from 1987 to 1994, essentially the league I grew up with. As DC currently goes through its umpteenth overhaul, we get this great one-shot from the classic creative team revisiting this era. Bwahaha banter and situations, a bickering Injustice League and the classic Maguire art, this time with even more facial expressions! I don’t know if the New 52 DC will catch on or not, but whatever happens, it’s always nice to pay a visit to the league of lovable losers. 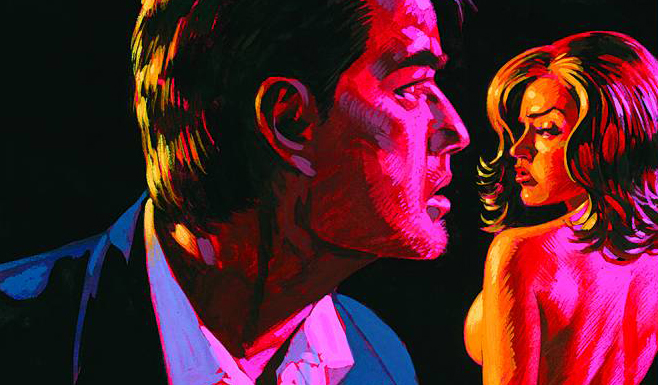 These flashback sequences are what get me. Artist Sean Phillips switches from his gritty, normal style to a more innocent style reminiscent of Dan DeCarlo. Then the fun kicks in. On the surface, it’s a lot of fun seeing these Archie analogues get to second base in the back of a car, smoke dope and commit violent crime. Beneath the surface though, there’s the tragic story of a man trying to recapture his glory days and who he’s willing to sacrifice to get there. 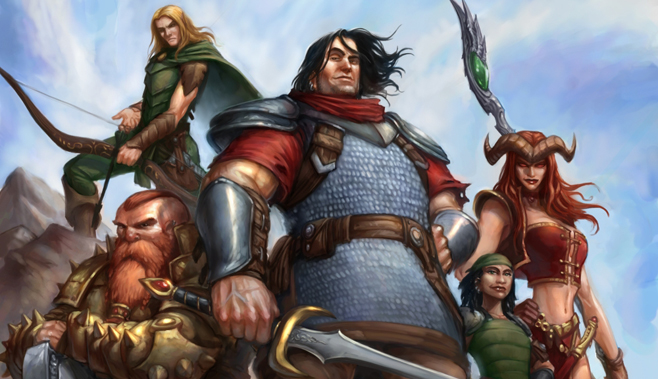 A while back, I wrote a piece about my longing for simpler comic book adventures that weren’t bogged down by decades worth of retconned continuity. I just wanted a fun romp with fun characters that reminded me of why I fell in love with comics in the first place. Being a longtime fan of Dungeons & Dragons, I found the IDW book an easy fit. The Dungeons & Dragons comic consistently hits all of the beats with a perfect mix of freewheeling adventure and snark while not shying away from the dark undertones found in the long-running history of the game. Dungeons & Dragons is currently at the top of my pull list.