In the aftermath of Fear Itself, Tanarus replaced Thor as the god of thunder. No one remembers Thor either, save for Loki (who struggles to remember his brother’s name). With Asgard in ruins, the gods start rebuilding the city – this time under the watchful eye of the All-Mothers, who have returned after Thor’s death.

All of this occurs in an issue that feels a bit too packed and very discombobulated. Plus, Fraction reveals the true threat of the new Asgard. But with no room to breathe, this issue fails to have the impact it’s attempting.

This comic has a conflict per page. First, readers see Asgard being rebuilt, then a conversation occurs between Heimdall and the All-Mothers. Next, while Volstagg looks at blueprints of the new Asgard, Tanarus shows up just in time to save a construction worker. Loki and Tanarus argue about the fact that Tanarus is not Loki’s true brother (but Loki can’t remember his brother’s name).

Loki runs away and encounters a witch in the desert who helps him remember Thor. The Silver Surfer makes an appearance as a man trying to get a job as a short-order cook. Then we find out the truth behind Tanarus: He’s an orc of some kind who’s disguised so that he can enter Asgard to bring ruin to the gods. Lastly, Loki finds Donald Blake and shows him who he really is. This causes Don to be transported to the afterworld, where he finds out that he’s about to be eaten by a Demogorge.

All of these plotlines occur within a page or two, so the issue never feels centered on a specific idea. Other than exposition for the future, it lacks any emotional impact regarding Thor. The issue doesn’t it do a great job of introducing Tanarus, either. When readers find out the truth, Tanarus is reduced to a sniveling peon. Because he’s playing a person with a lot of confidence, one expects Tanarus (whose real name is Ulik) to have some self-assurance. The idea that he’s going to sell himself as a new god of thunder, while being very subservient in real life, takes a leap of believability on the part of the reader – one that is pretty difficult to achieve.

This critique may be nitpicky, but I had a hard time following the story. Once I got to the “real” Tanarus, I lost interest completely. I thought he would be a cool character, and one who would offer a challenge to Thor when he returns. Plus, the issue has hints of a redemptive character (for Tanarus), but this takes away from the threat Tanarus is meant to represent. I wouldn’t be surprised to see Tanarus get his own series eventually or become some buddy of Thor’s.

This is a far cry from Straczynski’s initial work on Thor, which got me excited to read the character. This book, however, feels like a weak effort. I wouldn’t go out of my way to read this series now. Not unless something very cool happens.

But I’m not holding my breath. 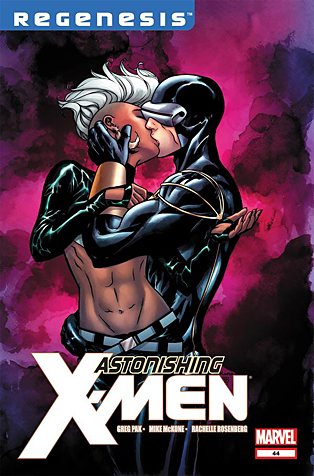 Something always seems to be going on in the X-Men universe. This may sound like a complaint, but it’s not. I’ve really enjoyed what I’ve read so far, and I respect the X-Men authors for the chances they take on their stories and the changes they make to their most beloved characters. No one feels safe in the X-Men universe.

So when I saw this cover, I knew I had to read this issue. As you can guess, not everything is as it seems and while the cover isn’t quite true, the issue still has a lot of cool moments and great storytelling.

Scott Summers may be healing from his battle wounds (Wolverine stabbed the shit out of him during their fight in Schism), but he’s still pissed off, and he spends the first part of the issue stomping around the X-Men compound on Utopia. The issue starts with Scott demolishing a locker room because he sees Wolverine’s tag on a locker. Because of his anger, Emma attempts to confront him, mentally, about the decision he made to fight Wolverine instead of work with him to save the mutant race.

After this, Storm returns and begins throwing bolts of lightning at Scott who, strangely, loves it – the interaction makes him feel alive again. Storm spends the rest of the issue pushing Scott to stretch himself and try new things with his powers. After they kiss, Scott is thrown back into the real world (and the reveal of the bait-and-switch occurs) and finds himself imprisoned in some tube that conducts his energy to power a city. My lack of X-Men knowledge makes the ending of the issue a bit cryptic, as the character who appears (and tells humans that they should thank him as a savior) is new to me.

This is a strong issue. Visually, it lacks the vibrancy that most other X-Books have, but the story has a lot of positives. Pak does a fine job of giving readers one Cyclops, and then developing the character over the course of the issue so that his changes are believable. Plus, Scott’s a cool character when he’s pissed off. The story is chock-full of action – the kind that’s grand in scope and presentation. The way it’s presented, the action has a visceral effect and readers can hear the crack of lightning and the stench of ozone when Storm controls the weather.

Unlike Mighty Thor, Astonishing X-Men focuses on one character rather than a slew of them, and since the story gives most of its attention to Scott, it doesn’t feel cramped or confusing. The ending of the issue offers readers a reason to remain on board with this title. In the aftermath of Schism, the writers of the X-Series have found ways to tell good stories about the two different groups while still maintaining the integrity of Schism.

Now’s a great time to pick up an X-Book. With the beginning of a new creative direction in the books, readers should have no trouble adapting themselves to the X-Men universe. 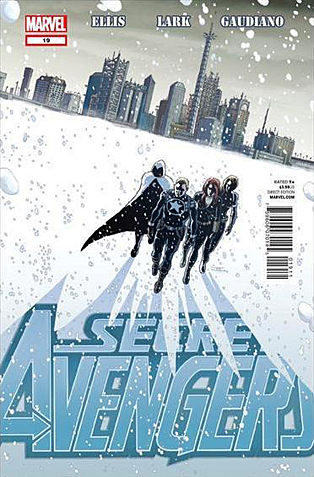 Bannen’s Book of the Week: I’ve been out of the loop with Secret Avengers. The series originally came after Norman Osborn’s rise in Dark Reign and his fall in Siege. The group operates in secret (hence the name), and carries out random assignments around the world. This time, they’re investigating a sale of black market super-soldier serum, but the truth happens to be very different. What Warren Ellis writes here is a fantastic one-shot, a story that has a ton of action, great dialogue and a fantastic plot.

The story opens with Steve Rogers’ crew in Symkaria, a fictional Marvel country that borders Doctor Doom’s Latveria. Moon Knight is attempting to meet with a man named Voydanoi, a businessman of sorts, but one who deals in strange drugs.

While Sharon Carter and Black Widow do some reconnaissance work, Steve Rogers attempts to get into Voydanoi’s building by beating up a security guard. What Steve doesn’t know is that the guard has super strength, and it takes everything Steve has to put him down. After Moon Knight gets into the penthouse, he realizes that the guards are possessed by a spirit that gives them supernatural powers. The rest of the issue leads up to a final confrontation with a drugged-up Voydanoi who stands seven feet tall and glows with power. In a page, the Secret Avengers defeat him (I don’t want to spoil how). All I can tell you is that it’s very, very cool.

The art in this issue serves the dark feel of the story, as it’s erratic and unkempt. The pencils are harsh, as are the color and shadow. But this style feels very appropriate for the tone of the story. The backgrounds are similar on every page, so much of the coloring looks muted, but this only emphasizes a sense of hopelessness and gloom. The cold, snowy weather helps as well, and Ellis doesn’t miss an opportunity to use the setting to make a point about drug abuse and the roads it leads to.

Because this issue is a standalone, it doesn’t require much from the reader to understand what’s going on. Ellis gives two quick pages of exposition, and the rest of the issue has action panels – a lot of punching and kicking occurs, and the members of Steve’s team operate like cogs in a machine. The action in this issue is nothing short of incredible. Each team member plays a vital role, and Ellis makes sure to show the importance of each individual. The final two pages emphasize how they work together as a team.

This is probably one of the best issues, of any comic, I’ve ever read. I’m not trying to be hyperbolic – this issue is phenomenal. From Warren Ellis’ superb storytelling to Lark and Gaudiano’s volatile art, this comic has the best of everything.

The cover alone should sell you, but if it doesn’t, take my word for it – Secret Avengers is the book to own this week. I urge you to pick up a copy of this issue just to see what happens.

Brian Bannen once spent a week impersonating a god of thunder before he was taken down by H.A.M.M.E.R. (or as they prefer to be called, the Maine State Police). Check out his rap sheet on Twitter @Oaser.