Growing up, I was a pretty damn good baseball player.

I hit .560 the year my team, Juliano Fuel Oil, won the Town of Poughkeepsie Central Little League title. I played a Gold Glove-caliber first base. I went to Little League camp in Williamsport, PA., played on the World Series field you see on ESPN and broke a rubber tire right off the heavy metal chain they strung it from to help you build your swing.

I was also pretty good at baseball videogames. There was R.B.I. Baseball, Bases Loaded I, II and III, Ken Griffey Jr. Presents Major League Baseball and my all-time favorite – when I got my first PC and became a top-shelf stat head – Tony La Russa Baseball. La Russa, whose Cardinals just won the World Series, reduced me to filling binders with fictional stats, made-up rosters and transactions and had me simulating seasons when I could have been learning about, I don’t know, hedge funds or something.

Over the years, my hardball skills have eroded. No longer do I endlessly toss baseballs against my parents’ stoop, making me an unstoppable defender. My beloved Jim Rice model outfielder’s mitt has been lost for more than a decade and while I’m still sure-handed, I’m a little less confident when I see screaming liners make their way toward me in the stands at Yankee Stadium.

It’s pretty much the same with baseball videogames. I haven’t regularly played one in years, and I haven’t played one with any notable skill in much longer than that, save maybe for Wii Sports Baseball – though, to be honest, my real talent was for Wii Sports Tennis, one of the last games where I could invariably reduce opponents to tears.

With all this in mind, I decided to start shaking off my baseball cobwebs – at least electronically – to play some hardball games on my Xbox.

So far, I’ve played just one. 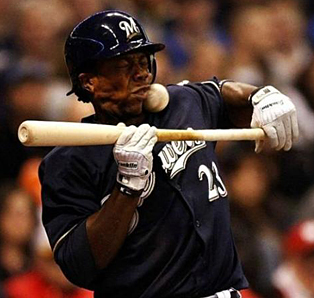 It may well be – and my readers know this is saying something – my single biggest failure to date as your humble Rookie of the Year.

On the bright side, I only downloaded a demo of Major League Baseball 2K11 and didn’t pay for it. For that I thank my lucky stars, because to say I suck at MLB 2K11 would be the understatement equivalent of saying Mets outfielder Jason Bay sucks at actual baseball.

I couldn’t throw. I couldn’t make contact at the dish. Worst of all, I couldn’t pitch a single goddamn ball down the middle of the plate. After making three straight outs – once, I fouled a single pitch off and almost called a press conference or rented out a dance hall – I walked every opposing batter until I slammed my remote down in favor of 24 on Netflix streaming.

I felt like A-Rod coming up to the plate in a big spot in the playoffs. I didn’t have a prayer.

I haven’t written this type of column in some time, and I assume they’ll continue to get fewer and far between as time passes, but why the $@(&)!# do you need two goddamn directional pads just to run down a fucking baseline?

I think R.B.I. Baseball had it figured out. Other than allowing pitchers to toss balls in the dirt that were impossible not to chase, the gameplay was ideal. A pair of A-B buttons and up-down-left-right to hit, run, throw, change pitchers, what have you. Sure, every hitter was a little more rotund than an actual major leaguer, and you didn’t have photo-realistic stadiums to ogle over, but the fun was real.

I honestly think playing in the big leagues is easier than playing MLB 2K11. At least there, I could close my eyes, take a hearty cut and maybe, just maybe, make contact with a baseball.

So readers, what did I do wrong? Did I not give it enough time? Do I need to get a different game? Is the PS3 the only true console for next-gen baseball games? Have I lost my touch forever or are jocks and gamers simply incompatible?

Please don’t answer any of these questions. To be honest, I just want to forget the whole experience ever happened.

Mighty Maccone, after all, struck out.