The Long Halloween was originally published as a yearlong maxi-series between 1996 and 1997, but I didn’t come across it until about 10 years later. You see, my interest in Batman cycles every few years. I haven’t been a consistent reader since the early ’90s, but I like to check in every now and again to see what my old hero is up to.

The Long Halloween is important in that it is considered by Batman fans as the definitive origin of Two-Face and a sequel to Frank Miller’s “Year One” arc. I recently reread the collection, curious to see if it holds up to repeated readings and my fickle “maturing” tastes. 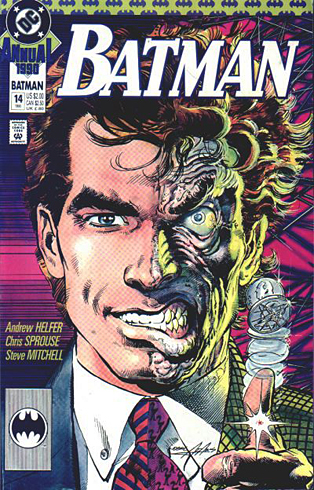 The Long Halloween immediately calls to my mind Batman Annual #14, originally published in the spring of 1990. As a reader back then in his formative Bat-years, I finally found the origin of Two-Face I was looking for. Two-Face was a criminally (no pun intended) underused villain who seemed to rival the Joker in sheer lunacy and momentum.

Readers, however, had little knowledge of his origin. Old storylines weren’t available in convenient collections and finding – let alone buying – originals was out of the question. Today, a resource like Wikipedia is at readers’ fingertips. Those who didn’t know, like myself, can find that Two-Face actually debuted in 1942 and was only used a handful of times over the next several decades, due to DC staff thinking the character was too gruesome for the young audience DC was aiming for.

I find Annual as intense now as when I read it in 1990, and through a contemporary lens it seems almost too harsh for that time. Annual features characters that would reappear in future Batman tales (most notably, members of the Falcone and Maroni crime families.) We see the dramatic courtroom scene where “Boss” Sal Maroni throws acid in District Attorney Harvey Dent’s face, scarring him both externally as well as emotionally.

Taking a step out of official Batman canon, both Annual and The Long Halloween make great stand-alone stories. They frame Dent’s transformation into Two-Face similarly in a Gotham City that is crime-ridden and mafia-controlled. But The Long Halloween manages to outlast Annual in readers’ minds for several reasons. Author Jeph Loeb incorporates much of Batman’s universe into this yearlong drama, muscling the story into the position as the one and only history of Two-Face.

Then there’s the fact that no one talks about Annual. Jim Gordon, still only a police captain, asks Batman if he considers the amount of supervillains in Gotham to be related to his presence, suggesting that Batman isn’t as new to Gotham as the story would let readers believe. The mere mention of this feels like revisionism. I’m pretty sure this theory had not appeared in the mid-to-late 1980s (when “Year One” and Annual were published) and it definitely was not in Batman’s first few years as a crime fighter.

There are other insider references, like Carmine Falcone telling Poison Ivy he doesn’t like working with her “type” (freaks) or Gilda Dent referring to her husband as “Apollo,” possibly after the Harvey Apollo character who became Two-Face in the 1940s Batman newspaper comic strip.

Parenthetically, a sticking point for me in the difference between Annual and The Long Halloween is the source of Dent’s possible madness. In Annual, Dent is said to be schizophrenic, originally diagnosed in his teenage years. Dent’s characterization seems less that of someone with schizophrenia than that of someone with the Hollywood-perpetuated idea of multiple personality disorder. In The Long Halloween, Dent’s breakdown is a combination of intense job stress and his assault at the hands of Maroni. There is plenty of foreshadowing of Dent’s fascination with duality, but it doesn’t come across as a mental disorder like schizophrenia.

The Long Halloween does and doesn’t hold up today. The story itself is a good detective tale, but the exposition is heavy-handed and repetitive. I tried to imagine myself reading it monthly over the course of a year. I also tried to understand that some readers might have picked up an issue in the middle of the arc, and DC wanted these people to keep buying the issues. Reading the whole story as a collection, however, is distracting. 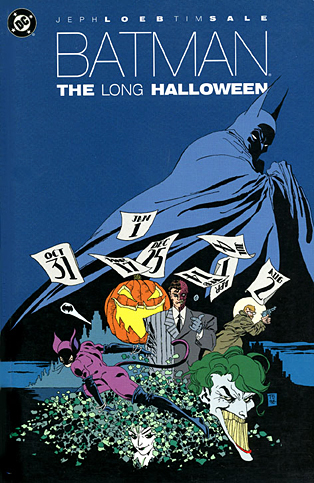 The art generally meshes well with the story, but I do find some things bothersome. Sometimes, Batman is drawn a little too exaggerated, too broad and muscular, and these inconsistencies take me out of the moment. I hate the way the Joker is drawn – specifically his teeth, which I couldn’t stand even on my initial read. I don’t know if Catwoman is supposed to be sexy in a noir, cheesecake way, but the T&A doesn’t fit. On my initial read, I liked how most of Batman’s famous villains had their own segment (but I didn’t like the short shrift Penguin gets).

With later readings, I find it harder to accept this as a possible “Year Two” tale.

So there’s the real problem. The Long Halloween has to take place during Batman’s second year. “Year One” is already accepted as canon. Robin comes along in Batman’s third year (although the “Year Three” arc – Batman issues 436-439 – apparently isn’t canon). The Long Halloween takes a year, so logic states it should be “Year Two.”

I’m biased because I like the original “Year Two” tale (Detective Comics issues 575-578, featuring artwork by a young Todd McFarlane), but my research tells me it has been retconned out of canon! Bruce Wayne looks older than he should be at this stage of his crime-fighting career. Harvey Dent, however, is striking, quite unlike the schlubby Dent of Annual.

The Long Halloween owes a debt to Annual. The major similarity, obviously, is Dent’s assault. There are a few minor points. Batman is dressed as civilian during the trial and is depicted the same way (wool cap, glasses, beard) in both tales. Dent’s assistant, Fields, is the inside link between the DA’s office and the mob (although his first name differs in each story) and is the man who smuggles the acid that scars Dent into the courtroom.

The Long Halloween makes some pretty obvious lifts from assorted gangster flicks (namely, The Godfather) and Arkham Asylum inmate Julian Day (a.k.a Calendar Man) has echoes of Hannibal Lecter. Less an homage, these references are distracting. Showing the lasting power of The Long Halloween, The Dark Knight film makes some pretty obvious lifts of its own (Bruce Wayne repeatedly saying “I believe in Harvey Dent” and the warehouse full of cash).

As nitpicky as I am, I still say people should read The Long Halloween and accept its place in the Batman canon. Just know that in a few years, DC will come along with a new history that readers will have no choice but to accept.

This Week’s Exciting Conclusion to the NYCC Photos!
Previous Post