I bought a high-def TV and an Xbox for this assignment. But who needs them?

America was built on brain power, the triumph of the mind in daring to dream, conjuring up a brighter tomorrow armed only with the imagination.

Did our forefathers have flat screen televisions attached to videogame consoles via HDMI? No, they lived in simpler times, when the only pastime more pleasurable than bouncing a small wooden marionette on your knee was spending a night with Parisian hookers – and you had to be Ben Franklin to do that.

So in the spirit of freedom and liberty and industry, I shut off my Samsung a few Saturdays ago and did what any red-blooded citizen of these United States should do, with pride:

It’s a safe bet many of you Unwinnable readers regularly dabble in witchcraft and wizardry, but for me, this was my first game in 25 years – the first time the lawful dwarf Orlick ventured out in search of gold and glory since his days roaming the wilderness of the Town of Poughkeepsie with his chaotic twin brother Elick.

Since none of you care about his backstory, I will now describe it in painstaking detail. Elick has gone missing and the new Dungeon Master has forced Orlick to start again from the very beginning, rerolling his strength, wisdom and sexual potency scores to the point where he is a weak, submoronic and impotent wreck. If it were not for a few fortuitous low rolls of the die by the DM, Orlick would have died in his very first battle the moment a leprechaun tossed a spear at him, ostensibly out of desperation.

Instead, humble, loyal, dumbass Orlick proceeded to win the firefight and enter the temple with his band of thieves – consisting of three previously established friends and one girl he’d just met that night – and pester the DM with a long series of questions that always began with the phrase, “Can I?”

“Can I smell the thick cloud of smoke without being consumed by it? Can I maybe waft it? Can I discern, from its appearance, the type of smoke it might be? Can I have a special power that allows me to tell if things are poisonous? Can I make the elf girl sitting next to me go in first?”

Soon enough, Orlick was back in his element. He’d made a friend, a fellow dwarf and drinking buddy-to-be. The two of them became so engrossed in in-character conversation, they decided to stay behind and let the rest of the party explore the secret panel behind the confessional, where Orlick had been told by a mysterious adversary with a high-pitched voice that his service to the temple’s lord would be very much appreciated.

Orlick, in his ignorance, thought serving the temple’s lord would be just fine, as would leaping headfirst into

a fountain filled with the most luxuriously delicious wine anyone had ever tasted. This was an ill-advised decision, though who might have advised him to do so is anyone’s guess. He nearly died, leaving untold riches to remain untold – and natural selection to work its magic – but he was saved to roll yet again.

By now, four or five hours had passed. Dinner had been ordered, delivered and eaten – Orlick had a Greek salad with grilled chicken – and that elf girl sitting next to him began to doze off before taking the N train home.

The rest of the party, battle-weary and pockets full of spoils, decided to make its way back to town to trade its treasures in – only to discover there wasn’t much to show for it. 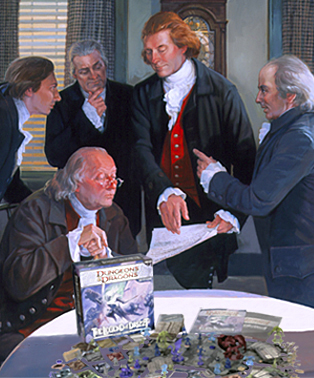 Which brings us back to the American Dream.

A night of hard work for a few gold and silver pieces and an enchanted sword which, in lieu of real powers, might have been useful as a reading lamp, sort of left Orlick and friends with a sour taste in their mouths.

But they refuse to be daunted. The gang, never deterred and almost always determined, plans to regroup at some point to continue its quest.

The merry band will reunite and re-equip, pooling resources and gray matter to celebrate a bygone era, when men were men and trolls were trolls. To craft a world out of thin air, to journey together in camaraderie and creativity, to use both heads and hearts impassively.

Unless there’s something better on Netflix.

Matt Marrone would like to apologize to Gannon, Elick and Orlick’s older brother, who disappeared from this quarter-century-old narrative as if he were Chuck Cunningham. You can follow The Rookie of the Year’s adventures on Twitter @thebigm.