A simplistic way to determine how a third-person-behind-the-back-camera game will play based on visual observation:

When the camera sits behind the character, look at his size. If he’s lithe and spry (and maybe Japanese), or Kratos, he’s going to be using melee attacks (ranged weapons are there to juggle enemies). If he’s big and bulky and can’t jump, then he’s probably going to fight at range, with melee being a last (and spectacularly bloody) resort. 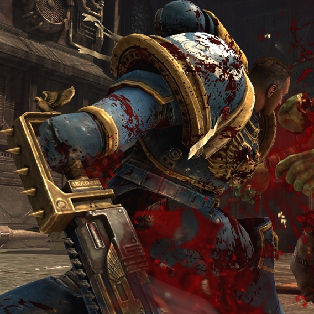 Space Marine, though, is a brawler, both in its mechanics and its place in the genre. It’s like the game took a look at Gears of War’s COGs, saw that they had borrowed a lot of aesthetics from the Warhammer 40K universe and then decided to take a swing at them with a giant, glowing hammer. There will be no attempts at subtlety. This is a world where men in giant armor fly in ships called the “Lance of Jove”.

Your character, Titus, and his battle brothers (his squad) say things like, “A vengeance launcher – that sounds promising,” without a wink. And there’s none of the awkward stabbing at emotion that occurs when trying to imbue masculine caricatures with attributes that caricature erases. These space marines, for all their bulk, are flat.

It makes them suited to being a game avatar, our alienation from their one-dimensionality mirroring their alienation from everything but their similarly one-dimensional battle brothers and the space Pope (“Emperor of Mankind”) they so unswervingly serve. The little bits of humanity in the game world are in the Imperial Guards’ conversations, the audio logs you find that are messages to loved ones and the factory announcements indicating and admonishing the number of employees absent from work that day.

As you move through the Forge World’s (basically a planet dedicated to manufacturing) pseudo-Latin-named Industro-Gothic architecture, you’ll see Orks and other enemies running around just out of melee reach. Sometimes you’ll walk into a room and a bunch of Orks are just hanging out, maybe having a fight club. You shoot a few and some attack and some go running and get on a lift and leave the others behind. Orks are jerks. Also, scripted. You’re kind of scripted, too. As Titus tells some members of the Imperial Guard after saving them, he is an extension of the Emperor’s will. He has no choice in what he does, which path you take.

So as a giant, you barrel forward. There is no stop and assess the situation from cover, no hesitating in the moving forward. You’re too big for cover anyway, too bulky for any kind of safety. And so you rush into the middle of the horde and you stun and execute enemies for the health boost because your only other option is to die. To wait is to idle and, as one loading screen’s “Thought of the Day” informed me, “Heresy grows from idleness.” When you fall, your battle brothers can’t revive you. You fight until you die (which you will do quite a bit, especially when the game decides it’s time to fight enemies at range rather than melee).

Titus’s health does not regenerate when you hide behind cover. Instead, you regain health from performing melee executions on enemies or from activating Fury mode (the Fury meter fills as you damage enemies). When you’re dying, the mechanics force you to throw yourself into the battle in order to survive. Success in combat, not avoiding it, equals health.

Executions trigger an animation and everything goes into slow motion. So not only do they restore your health, they also give you a quick moment to spin the camera around and renew your situational awareness.

Swinging your melee weapon pulls the camera back from the over-the-shoulder view, allowing you a wider view of your immediate surroundings, so you can chain your attacks at enemies in any direction.

You’ll not pick up any ammunition from enemies – the weapons they drop are not fit for one of the Emperor’s chosen. Also, they’re probably too small to be used with those giant gauntlets. You get new weapons from drop-pods you occasionally find scattered across the battlefield, greeted by a synthetic voice that explains what you’re about to pick up before praising the Emperor.

Aim-assist (snapping to target when you pull the left trigger) can be turned off, though its presence is helpful for those of us who aren’t particularly good with aiming.

Because you’re never stopping behind cover to recharge your health, action sequences aren’t about waist-high-wall warfare. The room layouts aren’t designed for you to approach strategically from different positions of strength. Instead, you move through what – in Gears and other ranged-based action games – would be no-man’s land, swinging and shooting and generally causing mayhem.

At least until, near the end of the game, most of the enemies’ attacks shift to ranged weapons and Space Marine shifts its design to mimic those games that it seemed interested in only smashing to a pulp. Then the lack of recharging health, of solid snap-to-cover controls and the focus on melee brawling feel out of place and turn it into a bit of a slog. This ranged combat is also the focus of the persistent XP-based competitive multiplayer modes which require an Elite Pass (free with a new copy of the game, 800 MS Points otherwise) if you want to level your character up beyond Level 5.

As über-bros, Warhammer 40K space marines have some strange gender things going on. They’re an exaggerated masculinity (technological, physically powerful, fraternal) embodied. They are loyalty and duty personified. And through most of the game, the world seems built for them. The scale of everything (enemies, ships, architecture) is such that you don’t really notice how large they are until you meet up with members of the Imperial Guard, who aren’t encased in giant armor.

The leader of these Imperial Guards is Lieutenant Mira. A survivor of a previous Ork invasion, she is commanding the troops because her captain did not survive this one. She has her own concerns during your mission, her own troops to lead and goals to achieve. When she does guide you, it is not from the safety of your genetically modified giant man-ear, but from the battlefield, right alongside you – the only woman in a no-woman’s land (other women are implied in the conversations of men or in audio logs).

Sometimes you’ll walk into a room and a bunch of Orks are just hanging out, maybe having a fight club.

The only time you hear Mira’s authority questioned is in an audio log:

Mira: Of course I am.

IG: Lieutenant, we need you in one piece. Let’s face it – you’re holding us together out there, and if you get… (the logs, especially the military ones, tend to cut off midway through the third or fourth line).

She doesn’t need rescuing, she doesn’t direct from a safe space, she’s respected by the people under her command because she’s a damn good leader.

Those audio logs (Servo Skulls – floating, glowing skulls with a bunch of whizbang gears attached) are introduced in a fifth-chapter cutscene, even though you find them all the time before then. You’ll find them on the slightly-less-beaten path, by walking down the dead-end hallway on the left rather than the one on the right. Making them more difficult to find would kill the pacing (which the aforementioned ranged-combat sections already do too often), the constant forward motion of the plot and the combat.

“This was no strategy of war. For Orks, this was sport.” says Titus (or one of his space bros – it’s hard to say which).The primary difference between the Orks’ violence and the space marines’ violence is that the latter is sanctioned by the Emperor and done while they speak with an upper-class British accent. You know the Orks are evil because their language is broken and Cockneyfied. Late-Thatcherite class warfare (40K started in the late 1980s in England) or Tolkien inheritance? Is there really a difference? Does it matter?

Not that much of Space Marine’s combat is all that strategic, of course. And is it anything other than sport for us, as players?

Brian Taylor spends his days launching vengeance on the innocent. Follow him @brianmtaylor on Twitter. Space Marine, from THQ, is available for the Xbox 360, PlayStation 3 and PC.