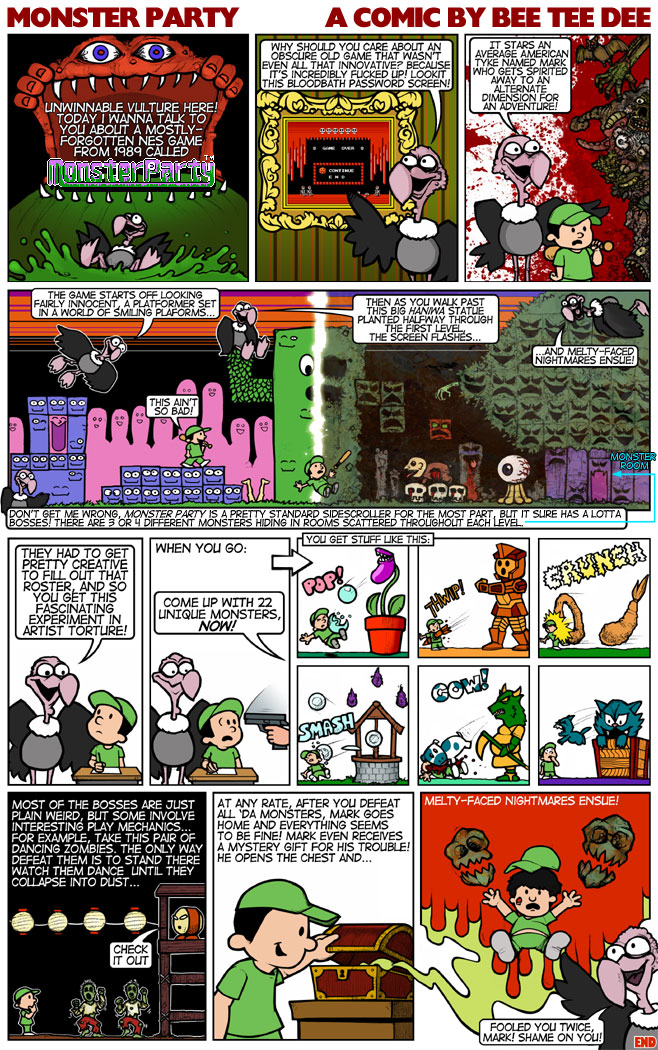 Monster Party has always been of my favorite NES games. My friend Tom had a copy and we were strangely obsessed with it back in elementary school, perhaps because neither of us owned many other games at the time or maybe just because it was such an obscure oddity that no one else knew about it and that seemed cool. Around that same time, Tom and I were also making our own games! We called them “paper games” and they were essentially homemade tabletop games with artwork that attempted to recreate the look of side-scrolling platformers. We’d bring them to the school cafeteria at lunch and accumulate major social capital by letting classmates guide paper cut-out avatars through the levels while Tom essentially played Dungeon Master, trying to make surmounting the game’s obstacles seem more complex than just saying “jump over the lava pit” or “throw the bomb at the monster.” Tom was in charge of the play mechanics and I drew the levels – it was a small development team. We also had music for one of the games! Actually, it was the music from Monster Party. We’d recorded it off of the TV on a desktop tape recorder that we would bring to the cafeteria to provide background music while kids were playing the game. I don’t think any of our paper games were actually based on Monster Party, but I’m sure we ripped off a few of the monsters, of course.

Everything is Bigger in Texas: What Was Your First Computer?