Videogame reviews suck. Reviewers blast through games to get the review out before release day only to have readers skim the details and go straight to the rating, ranking or score – which doesn’t matter anyway because most people have already decided whether or not to buy a game before they sat down to read about it. Unwinnable isn’t into that. Instead, we present the video game Post Mortem, a breakdown of important aspects of a given game, well after we’ve finished it and digested the experience. If you don’t want to know plot details about the games covered in Post Mortem, don’t read on.

The inFamous series, from Sucker Punch, follows the story of Cole MacGrath, a fellow who winds up with incredible electricity-based super powers in the traditional manner of a scientific accident.

The first game tackles the origin story, those early days when Cole was first learning to control his powers and choosing to use them for either noble or nefarious purposes. In a very comic book turn of events, the main villain is actually a version of Cole from the future whose main purpose was to train and prepare Cole to take on the Beast who, we are continually assured, is coming.

Throughout the game, much is made of the karmic choices the player must make, which boil down to whether you want to play the game like an asshole or not. The real point of inFamous, however, is to get as powerful as possible – raw voltage is the only way to defeat the Beast and karma doesn’t actually enter into the equation at all. The first game ends with Future Cole defeated, Present Cole amped up and the Beast’s arrival imminent.

If Cole questioned himself, if the player questioned Cole, if the developers questioned everything – then inFamous 2 might be deep instead of merely diverting.

inFamous 2 opens with the Beast (a gigantic, naked man on fire – not a terribly beastly Beast when it comes down to it) showing up, laying waste to the city and thoroughly kicking Cole’s butt. Cole flees to a New Orleans analog called New Marais to lick his wounds, find more power and hopefully prepare to not get his derriere kicked a second time.

The sequel to any game concerned with the accumulation of power inevitably runs into the same problem: what do you do with that power?

You can’t let the player keep it because playing a game as an almighty character is actually not fun at all. You can’t simply take it away because that invalidates the original experience (not to mention hours of investment) and is supremely frustrating to the player – a fact well-illustrated by the God of War series.

inFamous 2 takes a middle-of-the-road approach and strips Cole of some of his powers and hopes you are so happy with what you have that you forget the ones that are missing. It is a gambit that succeeds, in part because the showcase power, the ionic storm, is triggered via random enemy drops rather than an experience point based unlock.

The result is that you feel pretty unstoppable from very early in the game, a feeling that doesn’t slack even as the challenge ramps up.

A good number of reviews complain about how Cole is an uninteresting character with only a rudimentary personality. I’m not sure why.

Cole, now portrayed by Eric Ladin (The Killing, Mad Men), oozes character in comparison to the original gruff cipher (who, for the record, I also liked). Even more surprising: Zeke, one of the worst sidekicks of all time, also returns and, unbelievably, winds up pretty likeable as well.

In fact, late in the game, the two characters have a scene that, so far, is my favorite moment in gaming this year.

Meeting up at the end of a mission, instead

of bantering or pushing the narrative forward, Cole and Zeke, obviously exhausted, turn off their cell phones, kick up their feet, have a couple beers and watch an old western together. It’s a quiet moment between two friends who have obviously been through the meat grinder together and, in only a few seconds, displays more character than most games do over a dozen hours. 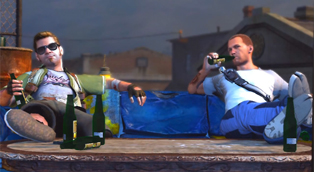 Bogged Down in Stereotypes

It was only after I finished the game that I began to wonder about the context of some of the characters. The Beast, when he isn’t a towering inferno, is a black man. The evil girlfriend option, Nix, is a black woman who, during my playthrough, sought to replace her dead family with new babies – swamp monsters. The scientist who caused all this trouble in the first place? Yea, he’s black too.

On the other side of the fence is the Bible-thumping hillbilly Hitler and his army of good old boys set to purify the poverty-ridden, flood-stricken city. Not to mention the even stranger South African mercenaries with ice-based powers who show up at the end of the third act.

Then there is the overly religious ending. Playing the good karma through to the end leads Cole to sacrifice himself for the greater good. Afterward, the city of New Marais makes him their patron saint. This, coupled with his implied resurrection at the very end, is hard to square with Cole’s very scientific origin.

None of this comes together to form a larger commentary on race, faith and poverty. There is no satirical aside, no profound philosophical revelation. I wasn’t going in to inFamous 2 looking for any illumination, but the fact that these things are all there accidentally strikes me as an incredible missed opportunity.

inFamous 2 is a fine sequel, an engaging if not overly challenging third person action sandbox game. It is probably the best handling of superpowers within a videogame and is pretty, smooth and easy to play to the finish.

In the end, however, it doesn’t feel like it achieved its potential. The use of karma paths implies consequences, but like the first game, the real point of inFamous 2 is to accumulate power, not to question it. If there were more questions – if Cole questioned himself, if the player questioned Cole, if the developers questioned everything – then inFamous 2 might be deep instead of merely diverting.

Stu Horvath aims to be profound in all the things he does. Watch him fail on Twitter @StuHorvath.