Ten years ago our fine city heard the birthscream of the New York Asian Film Festival. It has since grown to become North America’s premier looking glass into the best mainstream and underground cinema the region has to offer. Sharing its 10-year anniversary with Versus and Battle Royale, this year’s NYAFF is poised to outdo itself. In celebration, Unwinnable has deployed its Ultra-Cool Super NYAFF Mondo Death Squad to join in on the fun. This is what they’re looking forward to…

I’ve been going to Subway Cinema’s NYAFF since it began 10 years ago, watching as it grew from an underground festival at the Anthology Film Archives down on the Lower East Side to becoming legit in Midtown at the Walter Reade Theater and Lincoln Center. In that time I have seen a great many Asian films from Hong Kong, Japan, Korea, Thailand and more. The festival hosts so many films that you really need to pick your top few to make sure you get to see them. Here are my top three choices for the 2011 NY Asian Film Festival:

BKO: Bangkok Knockout: Ever since Tony Jaa hit the Asian film scene, ramping up martial arts movies with the energy and intensity that hadn’t been seen since the early days of Jackie Chan, Thailand has been the country to watch for innovative and brutally violent movies. Though there have been very few highlights such as Chocolate and Tom-Yum-Goong, there have been many low-budget attempts to cash in on the craze as well, showing that the director is (sometimes) more important than just action scenes. I’m not 100% sold on this film as it’s directed by Panna Rittikrai, who was behind The Bodyguard (comedy farce) but also Born to Fight, and Ong Bak 2 & 3. I considered the film a gamble, but then I watched the trailer and read the description that NYAFF has up on their site: “Did that guy just fall 50 feet onto concrete? Did that dude just get set on fire? When are they going to put him out? Did those guys just perform a fight scene underneath a moving truck?!” This is essential to why I love Asian cinema.

Karate-Robo Zaborgar: Now over to Japan, where really exciting and insanely bizarre (and utterly disgusting) things have been happening in movies in the last few years. The cult figures of this new era of Japanese Gonzo Grindhouse are Noboru Iguchi (director/writer of The Machine Girl, RoboGeisha, & Mutant Girls Squad) and the company Sushi Typhoon, which has released modern classics such as Alien vs Ninja, Helldriver and Yakuza Weapon. The Machine Girl is the movie that made me stand up and take notice of what Japanese filmmakers are doing besides the craziness that director Takashi Miike brings to the table each year. And even though RoboGeisha didn’t live up to the absolute brilliance of its trailer, this is a take on a superhero transforming robot motorcycle! Forget everything else I said and focus on that!

Reign of Assassins: It was really hard to pick an essential third film to see as there’s a lot of newer material that looks intriguing (Ninja Kids!!!, Shaolin, Milocrorze: A Love Story). But, I’m also really itching to see an old school Hong Kong flick up on the big screen like The Blade, Dragon Inn, Zu: Warriors From The Magic Mountain, Riki-Oh: The Story of Ricky, Duel to the Death. I highly suggest seeing any and all of those, though you can come by my place whenever and I’ll bust them out of my HK DVD collection. In the end I had to go with my girl, the Queen of Kung Fu, Michelle Yeoh and Reign of Assassins. This fantasy wuxia film promises to have a fair amount of depth and emotion to it. Michelle has let me down in the past (Silver Hawk, The Touch), but her hits far outweigh her misses. Plus, this is one of the few Taiwanese films at NYAFF, and if this festival’s growth is any indication, more Asian countries putting out more international hits means great things for fans of Asian cinema.

It’s the time for NYAFF again, and I couldn’t be more excited. Why, you ask? Because no one does perversion and gore like the Asians!

Foxy Festival: The trailer for this Korean film leads me to believe that it might be in the running for one of the most hilariously perverse movies in existence.

Karate-Robo Zaborgar: This is the movie I am anticipating the most highly. Directed by Noboru Iguchi (RoboGeisha and The Machine Girl), it’s almost guaranteed to be my favorite. How can you not love the director that put tempura frying a teenage girl’s arm onto glorious celluloid? 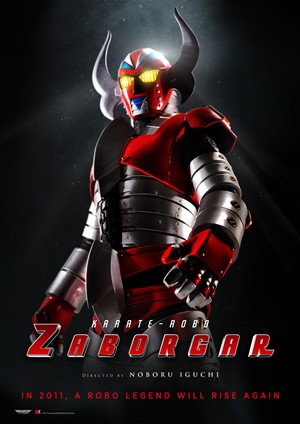 The New York Asian Film Festival is truly a rich experience. Consistently unpretentious and above all fun, this year’s schedule features new films from all genres and geographies, spanning from epic to exploitation, Japan to Malaysia – and it’s sharing its anniversary with two classics, Battle Royale and Versus. Sadly, real life makes it impossible to catch everything – I am quite disappointed that I will be missing Machete Maidens Unleashed!, a documentary on the Filipino exploitation industry in the ’70s – but I know there will be plenty to make up for it. That being said, as sure as the day is long, these are the films real life won’t be getting in the way of this year:

The Last Days of the World: Could this be Japan’s answer to The Doom Generation?

The Man From Nowhere: (And I thought this Korean gem had me at ‘Hello!’) “Mistake #1: So-Mi’s junkie mom decides to steal some heroin from the local gang. The gang kill her and then they make Mistake #2: they hand over orphaned So-Mi to a black market organ harvester. This really pisses off Tae-Sik and before you can say, “That’s my eyeball!” this sleek pain machine is going after the bad guys like a human torpedo. He’s not just going to kill them, he’s going to kill everyone they ever met and burn down their houses, too.” [from the NYAFF description]

Will Kurt live tweet his way through Karate-Robo Zaborgar? Find out here!

Peter will most likely be making passes at Asami on Twitter. Will it work?

And while you’re at it, don’t forget to take a look at the official NYAFF website and make your own list of this year’s unmissable films!

A Long, Strange Journey: An Interview with Grady Hendrix of the NYAFF
Previous Post