In addition to running Unwinnable, I am also the managing editor over at Digital Innovation Gazette, a trade website sponsored by Intel and concerned with the more technical aspects of videogames and their development. During the course of my duties there, I have the opportunity to do the occasional interview and, since DIG has graciously allowed me to syndicate that content, I can now share them with you here in their entirety. Enjoy!

The way of the samurai, with its violence and pageantry, is one of the most romanticized martial traditions in the world – and no videogame has done it quite the justice that Total War: Shogun 2 has. Released on March 15 to almost universal acclaim, the PC-only strategy game is a visual feast. DIG spoke to Mark O’Connell of The Creative Assembly, the developers of Shogun 2, about bringing the world of feudal Japan to life with art and technology.

Digital Innovation Gazette: Shogun: Total War was an offbeat game with a devoted, but relatively small, following. What brought you back for a sequel?

Mark O’Connell: The Sengoku period of Japanese history was a fascinating time, from both a political and a martial perspective. We’ve always harbored a longing to revisit it and apply everything we’ve learned through the evolution of the Total War series. The number of people who play Total War games has of course grown considerably in the last 10 years and it feels good to bring the intrigue and military challenges of the period to new players as well as old. 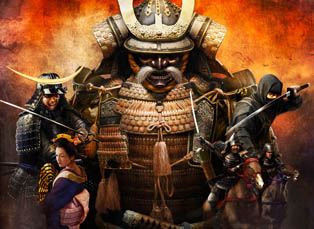 Also, Empire: Total War and Napoleon: Total War were vast in scale. We felt a need to reduce this and focus more on the core values of the series. We aimed for depth rather than breadth.

DIG: Can you give us a rundown of the basics of the series?

M.O.: The Total War games have evolved in an enormous number of ways over the years, but the core mechanics have remained the same. Total War features a turn-based campaign experience involving exploration, diplomacy, city management, economics and army building, coupled with real-time battles on an epic scale.

DIG: The game is very beautiful. How did you go about bringing traditional Japanese art into the digital world?

M.O.: Our dedicated art team basically did a hell of a lot of training. One of our artists literally learned how to paint with Japanese brushes, in the Edo style. We completely immersed ourselves in Japanese culture, with its music, its artwork, its literature, its language and its people. We then worked to apply this style to every part of the game.


DIG: How important was balancing the beauty with realism?

M.O.: It’s worth noting that we took inspiration from the artwork and styling from the Edo period – which came later than the Sengoku period – for Shogun 2. These styles resonate much more with a modern audience; they’re more recognizably Japanese and that’s where the balance comes in. We wanted to create a strong sense of authenticity and to do that we used a little artistic license.

Other than that, we never really felt constrained. While the period promoted a culture of focus and purity, the daimyos indulged in flamboyant designs that turned their armies into walking works of art. Personal heraldry, armor variants and coloring made samurai armies stand out with tremendous vivacity.

A great example of this is the Horo – a painted silk balloon stretched over a bamboo frame that the general’s personal mounted guard would strap to their backs before riding into battle. From a design perspective, it was a uniquely beautiful period and our art team really resonated with that.