So much went on this weekend at Boston Comic Con that if I tried to cover all of it, it would eventually, out of sheer length, bore you to death. Here is the microwave version of what you need to know.

There were long boxes and back issues a plenty. My guess is that anyone needing to fill in collection gaps left very happy.  This con is definitely geared towards comic books.  It is not the potpourri con that C2E2 is or the Juggernaut that is San Diego. While there are some general comic shop vendors that also being toys and statues, the focus here is on comics, their writers, creators and artists.

Artist Alley was hopping, actually I believe it was sold out of artist space, which was awesome! Being a huge fan of comic artists I hope they all, both established and newbie alike, had a profitable weekend.

As at all cons now, Cosplay was there in moderate force.  My two favorites were the incredibly well done B.A. Baracus  of A-Team fame(who you could not avoid …I think he is in everyone’s pictures), and the very subtle Tony Chu from Chew(who I warned not to eat the chicken). 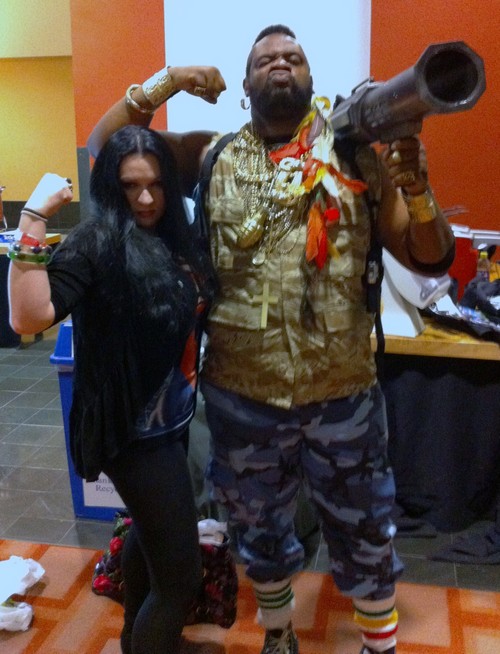 The panels were great! It was a small room, which was good if you were able to get in, because it created an intimacy with the speakers, but forget getting a seat to the larger panels. One cool thing was that if you were in the room for “panel 1” and wanted to see “panel 2” you did have to get up, leave and re-enter. I know this might sound really annoying but as compared to the RIDICULOUS San Diego Hall H policy where someone can set up camp all day, thereby locking out anyone else who just wants to get into one specific panel, it was a blessing.  I applaud the organizers who ran around making sure everyone got to see exactly what s/he wanted to see.  This personal attention is not standard at large Cons and I must  specifically note the efforts of Randy House and Erick Korpi for their tireless efforts. While I couldn’t get to all of them because of obligations elsewhere, some standout panels  were:

The Female Creators Panel featuring Alison Sohn, Ming Doyle, Stephanie Buscema, Sara Richard and Marsha Cooke (who along with Stephanie did the OFFICIAL unveiling of Teenage Satan at noon). Allison , supported by Ming lead a thoughtful, and occasionally heated discussion on why “women in comics” should stop blaming the glass ceiling for their lack of success, and redirect that energy towards refining their work. Their point, to the chagrin of some cookie cutter “femi-nazis” in the audience, was that comic companies actually don’t care if you are a man or a woman, so long as your work is good!  As Allison so perfectly put it, “There’s no sexism or harassment, because we’re women in our workplace. We all mostly work from home! Who is going to harass me my dogs?” The panel was great and at noon the video for Teenage Satan played for an enthusiastic crowd. This first look was a HUGE success! 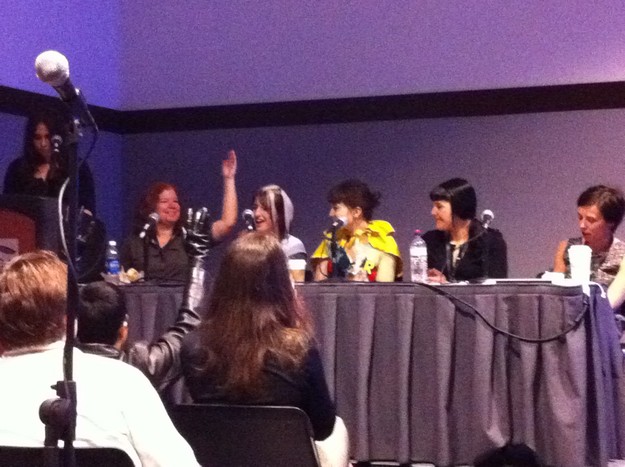 How to Draw Comics Like a Badass with Frank Cho was one of the best panels. Not only did the crowd get to watch him draw a full page sketch  in real time (a video camera magnified it on a giant screen), but the subject of the drawing was determined by the crowd ,and a $5 raffle ticket could win you that piece! After much debate the crowd voted on Tigra, fighting ninjas, on a train. Frank was hysterically funny and open with the crowd. Best of all, there was an UNWINNABLE sighting, as yours truly somehow ended up on camera duty! 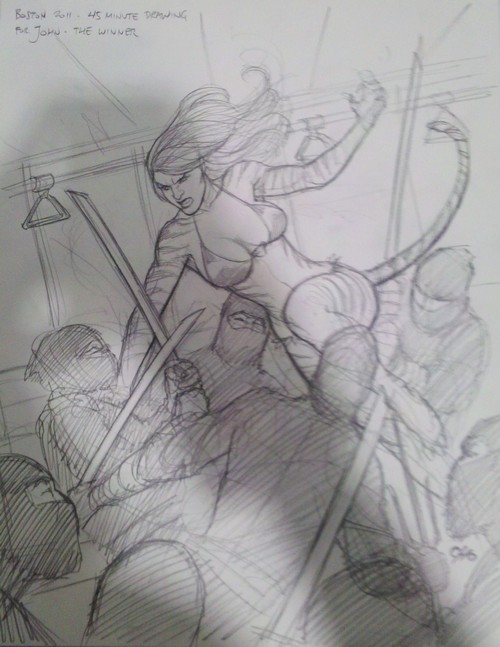 One of the most interesting, and unique panels was Comics in the Classroom lead by Missouri’s  Jefferson City Public Schools Teacher of the Year, Jennifer DeFeo. She illustrated how middle school children benefit from a curriculum that utilizes comic books.  Using the story content, as well as the story structure, she has created a lesson plan that engages students, and nurtures a love of reading. It also teaches critical analysis skills, the ability to connect seemingly disparate concepts, pro-social morals and behaviors and many other important cognitive processes.  See, all those years you spent at your local comic shop were just part of a well rounded education! I’m sure we will very soon also hear about video games in the class room and their use in training fine motor skill development. 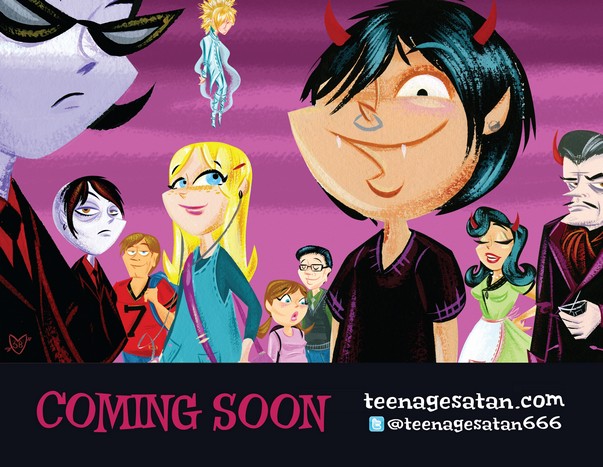 The Teenage Satan launch part was a HUGE success! The Vlora restaurant was literally packed to capacity. Anyone able to make it to the event would have been treated to an enormous collection of star-studded talent and industry names. While I did see most people (I hover around the bar area), I’m sure I missed a few in the  packed-like-sardines crowd. I can, with all certainty, vouch for the following attendees: Darwyn Cooke, Adam Hughes, Tim Sale, J. Scott Campbell, Frank Quitely,  J.G. Jones, Matt Wagner, Stephane Roux, Dave Johnson, Stephanie Buscema, Allison Sohn, Tony Harris, Mark Chiarello, and of course both Candis and Marsha Cooke (if I missed anyone, you have my sincere and martini soaked apologies). Everyone was really positive about the project and very excited about the Boston Baby Dolls, who put on one hell of an amazing show (honorable mention goes to the gal who did her tassel twirling act en pointe…that’s  the very difficult ballet up on your tippy toes, for those of you unfamiliar with the term).  Ever gracious, the girls hung out with us after their set was over partying until the wee hours of the morning!  Big win! Overall, it was a great night full of friends, talent and promise.

This is in no way a complete recap of all things Boston Comic Con, but it does touch on the highlights, or at least those that I was privy to. I think the most important thing I unexpectedly took away from this intimate and friendly con is that we all (fans, collectors, artists, writers, creators, cosplayers etc.) are, due to common interests, one big family. Admittedly it is a slightly zany and occasionally dysfunctional one.  It’s the little things, like the event staff and volunteers caring that you get into the panel for the artist that you love, or the fact that so many professionals and fans can band together to support  a new project, that are important and show what we geeks are really made of. Sure, we are frequently depicted as nit picking and sometimes bitchy, fervently arguing over which Doctor is best, why we love/hate George Lucas at the moment, or “who would win a fight between….”, but it is because of these things that we love the company of other fellow, for lack of a better word, geeks. This point isn’t as poignantly made at larger shows where big movie companies and corporate business rein supreme, but Boston Comic Con was a reminder to everyone to show your “Con Family” some love.