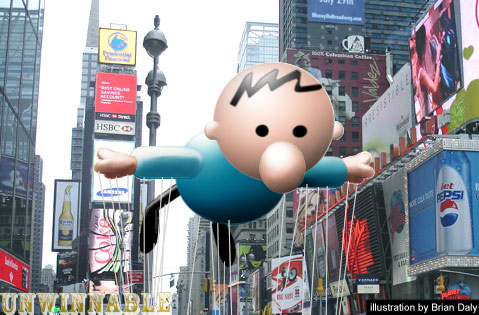 Jim’s Journal is back! For those who’ve never heard of it, Jim’s Journal was a comic strip created by Onion co-founder Scott Dikkers in the late 80’s that ran until 1997, when Dikkers ended the strip to focus more on The Onion’s burgeoning comedy empire. Since then, he’s left The Onion to found Dikkers Cartoon Company, which has produced some very funny animated shorts. But Dikkers has returned to his cartooning roots to revive Jim’s Journal with some new strips, which began running earlier this week at GoComics.com.

The conceit of Jim’s Journal is that it’s the illustrated diary of an extremely low-key guy named Jim who leads a fairly uneventful life. He attends classes at some unnamed American college, works a series of menial jobs, and sits around watching TV. Jim’s the ultimate straight man, observing what goes on around him and earnestly documenting it with a minimum of commentary.

In a world of eye-rolling, world-weary cartoon characters that supplied an endless stream of “clever” sarcastic commentary, Jim’s Journal felt like a breath of fresh air to some. But many readers didn’t “get” Jim’s Journal in its day, and some of them were actually infuriated by the strip! It may seem strange that a comic which once literally featured 4 panels of the main character sitting in an armchair with the caption “I didn’t do anything today” would inspire such strong feelings, but many readers were incredibly frustrated by the lack of punch lines in Jim’s Journal, to the extent that Kansas State University students legendarily started producing “Kill Jim” t-shirts after the strip started running in the Kansas State Collegian.

I suppose it’s a risk you take when you produce any type of esoteric humor: some readers are bound to feel like they’re being left out of some smarty-pants inside joke, or maybe they’ll even suspect that the joke is on them! But really, there was no hidden meaning to be discovered in Jim’s Journal, it’s just a brand of humor that appeals to a certain peculiar sensibility. There’s no way I could explain exactly why I find it hilarious that someone would write a diary entry about hearing the Hall & Oates song “Kiss on My List” on his clock radio in the morning and having it stuck in his head all day, I just do.

Maybe the internet of 2011 is better prepared for Jim’s Journal than the college newspapers of the early 90’s were. After all, we’re now awash in blogs, twitter feeds, and other social media bullshit that provides a forum for discussing inane and trivial happenstance in great detail. With its simplified visual style and extensive beanplating, Jim’s Journal definitely won’t look as out of place next to other webcomics as it did taken alongside the syndicated strips of its day. At the same time, I think it’s a bit easier to get into Jim’s Journal if you read a whole collection. It can take a few strips to get into the rhythm of Dikker’s low-key humor, and though the plot lines were never terribly involved, the strip was actually highly serialized, and the use of continuing “plot lines” sometimes added to the humor.

One brief story thread involved Jim’s roommate Tony  –  a bit of a smarmy know-it-all type – discovering coupons. Tony spends a few strips extolling the virtues of coupon-clipping and chastising Jim for buying cereal at full price. But when Tony breaks out a coupon for Oreos at the check-out, two guys in line behind him snicker. In a subsequent strip, Tony tells Jim “coupons are dumb.” It’s a nice bit of subtle character-driven humor that’s funny in the way people’s real-life behavior often is.

The resurrected Jim’s Journal will incorporate a slightly different structure, as apparently Dikkers will be alternating between strips that pick up where the original Jim’s Journal continuity left off and strips that flash back to Jim’s high school experience. My only qualm with this is that it’s not really explained anywhere on the GoComics Jim’s Journal page, and it’s a little confusing to go from a strip in which Jim is apparently picking up his journal for the first time in a while to a strip in which Jim is seen daydreaming about alien abduction during Geography class.

You Can’t Always Get What You Want