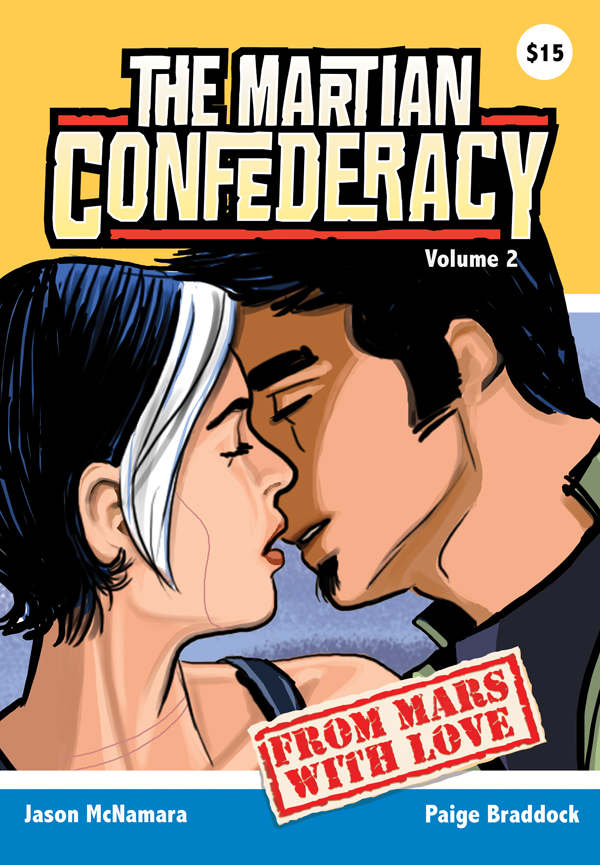 In the sequel to their 2008 graphic novel, The Martian Confederacy, writer Jason McNamara and illustrator Paige Braddock waste no time with a standard recap.  They toss the ragtag group of heroes right into the story while simultaneously giving new readers all the information they need within the story.  It’s a difficult trick to pull off, but The Martian Confederacy: From Mars With Love stands alone perfectly.

The story involves three outlaws (a human, an android and a talking bear) investigating a rash of child kidnappings on Mars. What ensues is an adventure across space to save the children while dodging the honeymooning Martian Alcalde (Mars’ sole and corrupt cop).

“The way the books are structured, we’re constantly paying tribute to the sci-fi that came before,” Mr. McNamara told Unwinnable.  The world of The Martian Confederacy is quite literally based in that science fiction. After a millennium bug wiped out recorded history in the year 3000, the people of Earth excavated an ancient video store and took its contents to be documentary. The series is a love letter to science fiction. It’s a clever set up where any reference can organically weave its way into a story.

Instead of being a long, drawn out soap opera like, say, any X-Men comic, The Martian Confederacy is episodic in nature. Yes, some threads carry over but everything makes sense within the context of a particular graphic novel. That is a rarity in comics today and it is damn welcome!  Another thing I dig about the book is the tone.

Described by its author as “a romantic comedy about child slave labor,” From Mars With Love certainly lives up the that description.

One of the standout characters in the book is a talking bear named Spinner. He’s the “big, grumpy bear” of the story.  “I kind of saw him as the Uncle Jesse on Dukes of Hazzard. He’s got to be the wise man of the story,” said Mr. McNamara.  Spinner’s a family man, but he’s a damn good man to have in a fight. He is a bear, after all. He’s a loyal character too, even if his pals don’t exactly reciprocate.  It’s strong character work that makes this book work. 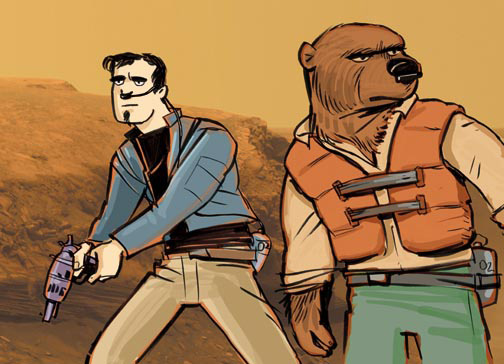 With the market currently in a precarious place, making comics is risky business.  The series is published by artist Paige Braddock’s Girl Twist Comics and is currently competing for shelf space against Marvel’s tent pole event, Fear Itself and DC’s War of the Green Lanterns.

“Marvel’s big books always kind of spread like an octopus over the [Previews] catalog.” And Mr. McNamara’s observation is true of the new release wall too.  Walk into a comic shop and you’ll see crossovers, variant covers and all that jazz.  “I’m not down on the stuff,” he said. “I’ll probably buy some of that myself, but to compete with that… it clogs up your retailer’s pocket book and your consumers.”

It is important to keep books like this alive. The books from the major publishers are great, but it’s books like The Martian Confederacy that keep comics going. Mr. McNamara’s prose and Ms. Braddock’s pencils compliment each other perfectly and are a credit to a collaborative medium. And, to put it simply, it’s a damn fun story from talented folks you haven’t read before. So, put down that Fear Itself variant cover, it’ll be there next week. Instead, take a chance on The Martian Confederacy: From Mars With Love.  Go ahead, ask your local retailer for a copy today.  Also, be sure to visit their website for some preview pages.

From Mars With Love, The Martian Confederacy