We had cake and whatnot at my house and then we all piled in a couple of cars and went to the arcade. There was a Happy Birthday banner up right when you walked in. The layout was more like an empty office than an arcade. The dark wood paneling, short neat carpet and low lighting housed about 15 machines in a cozy atmosphere. There was no party room here.

Westwood Arcade has been closed a long time now. The building was turned into a lawnmower repair shop. Virtually every arcade I remember as a kid has closed.

I am not one for being nostalgic. For the most part, nostalgia makes me feel like a child and that I am being pandered to. Thankfully, the owners of Barcade are not nostalgic, they just know what they like: good beer, a solid jukebox and 80’s arcade cabinets. I went to their Brooklyn location for my birthday last year. With close to 40 machines and at least that many different beers we all had a great time.

Now, the owners of Barcade are bringing their business across the Hudson, opening locations in Jersey City and, eventually, Philadelphia. On a cold, snowy night at the end of January, El Exigente and I met up with co-owner Kevin Beard at the construction site to see what was going on and what we can expect from Barcade, Jersey City.

Unwinnable: So how are your neighbors? Are they excited?

K.B.: Everyone seems to know what is going on. The rest of this building is a gym.

Unwinnable: Oh, wow. So you have jocks upstairs working out and nerds downstairs playing games.

K.B.: Yeah, if you stand over here and are real quiet, you can hear them running.

Unwinnable:  Are you going to have skee ball?

Unwinnable: Do you have a favorite game?

K.B.: My current favorite game is Timber! It is kind of like Tapper. One is a bartender and one is a logger.

Unwinnable: I’ve never heard of it.

K.B.: It is pretty rare, but we have it side by side with a Tapper at Barcade [Brooklyn]. 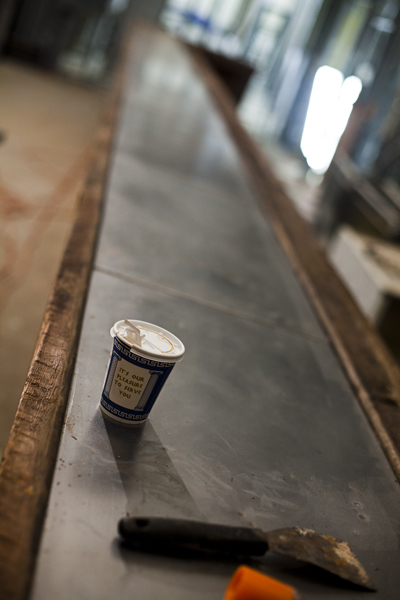 Unwinnable: Now where do you get you machines fixed?

K.B.: We have guy come around to our space. I think he was a repairman in the 80’s. He was around when all these games were new. He knows which games are reliable, and the ones weren’t reliable when they were new.

Unwinnable: Where do you find the games?

K.B.: We find all the games in a region. We did a trip last summer, you know from here to Maine. We pick up three games here, one game there, two games there.

Unwinnable: Is it planned? Or do you just ask around Chinese food places and laundromats?

K.B.: No, we have it set up ahead of time. Some are in basements, some are from hobbyists that just fix them and sell them.

Unwinnable: What is the most expensive game you bought?

K.B.: Star Wars Cockpit. I don’t remember how much it was, but it was up there.

Unwinnable: What I think is weird is that you have Contra. I don’t think of it as an arcade game.

Unwinnable: You have 4-player Gauntlet, but no 6-player X-Men. Why is that?

Unwinnable:  That answers why you don’t have Street Fighter and explains why you have Karate Champ. A lot of yelling with Street Fighter. So how many beers are you hoping to have on tap here?

Unwinnable: You don’t have shit beer, you have good beer.

Unwinnable: I used to not like arrogant beer, but now I do.

Unwinnable: Anything that tastes like bark and soy sauce is awesome.

Unwinnable:  Do you get a lot of serious players?

K.B.: Sometimes. We get world record holders who come in, Hank Chien comes in. The Star Wars guy came in and was there from open to close.

Unwinnable: Does Jersey City give you any problems for anything? Do you have a Ghostbusters style power grid underneath here to run all these games?

Unwinnable: I read that you guys use wind subsidized power.

K.B.: We do in Brooklyn, we probably will here as well. We’re trying to do a lot of the same things.

You know, the contractors asked where we were putting the TVs and the dance floor. No. None of that. No DJ nights. We are taking the Brooklyn experience and bringing it to Jersey City.

It’s going to be good.

The Arcade, and What We Stand to Lose Along With It
Previous Post