It is hard to get all riled up about how crappy the week is going to be when your week consists of flying to San Francisco to cover GDC 2011. Shall I moan about the Chinese food I shall be gorging myself on or the yet-to-be released games I will be checking out? That’d be a bit of a reach. It’s going to be a pretty damn splendid week.

No, let’s talk instead about what looks good and the stuff I might write about given enough free time and a shortage of alcoholic beverages.

Battlefield 3
Have you seen the gameplay trailer? Buried under the Nine Inch Nails style static and the spastic cuts are some of the most compelling visuals I have yet seen for a modern military shooter. Granted, the Battlefield franchise has a special place in the hearts of most of Team Unwinnable, so I am a little biased, but I think this installment is going to drop a lot of jaws.

Panels Galore
I currently have two full pages printed out that list all the panels I want to attend. This is after extensive weeding out – a friend of Unwinnable  jokingly said to me “the scheduler only underlines how many panels you’re going to miss.” I couldn’t agree more. How does one choose between a Bioware talk on morality and a rundown of the creature design in Dead Space 2? Current pick for most talked about panel: GDC Microtalks: One Hour, Ten Speakers, Hundreds of Fun New Ideas. Current pick for personal favorite: Classic Game Postmortem: Polulous, featuring Peter Molyneux.

Shoot Many Robots
The name kind of says it all on this one.

Indie Extravaganza
GDC loves its indie games. I am not looking forward to anything in particular so much as I am hoping to be awash in small studio strangeness (slight fib…I am actually keen to see what the hubbub over Octodad is all about). I love the AAA titles as much as the next guy, but it was passionate weirdos working on oddball games that created this industry and it will be passionate weirdos working on oddball games that will take us to the next stage of evolution.

Our Most Ancient Temple
A secret: thing I am most looking forward to has nothing to do with GDC at all – I can’t wait to make my second pilgrimage to the Musee Mechanique.

Our modern videogames were born of earlier consoles which in turn grew out of even earlier arcade games which drew from games made for the earliest computers. Before that, we had pinball and bagatelle. And before that, we had orchestrions and automatons. The Musee Mechanique is a collection of hundreds of these early automata. Pop in a quarter and you might see an entire mechanical orchestra come to life or an opium fiend light his pipe or a mystic tell your fortune. The museum represents the primeval ooze from which all interactive entertainment sprung forth and it is as good a reason for a gaming enthusiast to come to San Francisco as any conference. 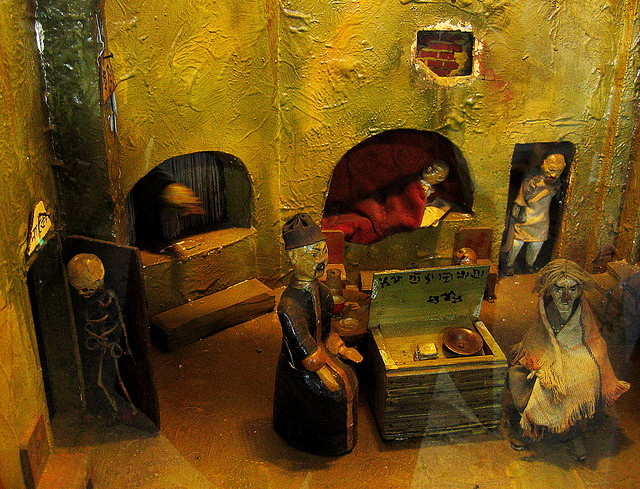 Of Birthdays, Cake, Jesus, Little People and the Prospect of Hell