I’m just like every other thirty-something Star Wars fan.  I lament the prequels – a lot.  I do draw the line at the “George Lucas raped my childhood” argument.  That’s just a really fucking stupid statement.  If you still say that, you are an idiot. The Flanneled One gave us a great gift as children, and now he’s re-gifting it to our children.  However, every once in a while, someone at Lucasfilm throws us aging fanboys a bone.

Set between Star Wars Episode III: Revenge of the Sith and Star Wars, Darth Vader & The Lost Command focuses on the Dark Lord of the Sith taking his place by the Emperor’s side in the relatively new Galactic Empire. After Anakin Skywalker’s fall, but before Darth Vader’s rise to prominence, the rise of the Empire is a fertile garden for creators. Writer Haden Blackman and artist Rick Leonardi take full advantage of this vast field, planting seeds for what Vader will become by the time we first see him in Star Wars. 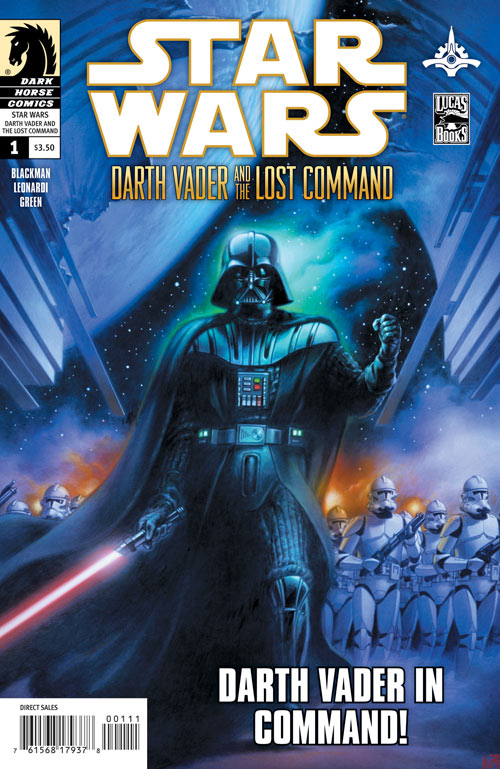 Mr. Blackman is very familiar with this era in Star Wars lore. He did write the script for Star Wars: The Force Unleashed after all. He understands Darth Vader and gives readers a glimpse into the mind of the man once known as Anakin Skywalker. This is the stuff I always wanted to see as a kid. It’s Darth Vader’s early days, like Batman: Year One, only starring a dark, armored wizard with a penchant for choking senior staff. Mr. Blackman gets into Vader’s head and shows us a young villain eager to wrap his gloved hand around the galaxy’s throat.

I like Rick Leonardi’s art.  He draws some great Star Wars battle scenes and he also conveys the politics in a scene between Vader, the Emperor and Grand Moff Tarkin. It seems Princess Leia’s distaste for Tarkin is genetic. There is only one thing that bugs me. There are a few panels where Darth Vader looks to have a pig nose. I don’t know how this happened, but it doesn’t happen often enough to take me out of the book.

Blackman and Leonardi tell the tale Darth Vader’s attempt to rescue Grand Moff Tarkin’s son from the Ghost Nebula. There’s action, adventure and intrigue abound. This first issue does a fantastic job setting up the kind of Star Wars tale old fans like me enjoy reading. Next time you’re in the comic shop, pick up a copy. It’s a lot of fun.

Yes, Ian knows it is proper fan etiquette to refer to the original Star Wars movie as A New Hope, but the 1977 theatrical release title was Star Wars. That’s the name of the movie. Deal with it. For more wit and wisdom, follow Ian on Twitter: @iangonzales.