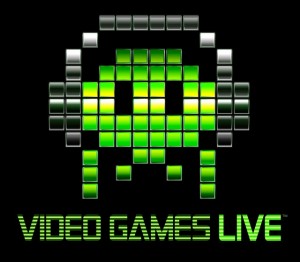 I ended the year with a bang. My friend, Mike, hooked me up with a ticket to Video Games Live. We went to a VGL show about a year ago at the Beacon Theater. It was my first venture and his third. I was truly impressed that night at how approachable Tommy Tallarico made videogame music to the masses. It wasn’t a show just aimed at hardcore gamers, it was for everyone. That’s something he sticks by and mentions at every show. The night was great. I hadn’t seen a show at the Beacon since the 90’s and because of that show, I couldn’t wait to see it again in 2010.

Tommy Tallarico is the co-producer of the show and has over 20 years experience in authoring the soundtracks to the games of our lives. He’s won numerous awards and is the founder and president of the Game Audio Network Guild. It took him 3 years to get everyone on board and that momentum thrust him into their inaugural event in 2005. He is also cousin to Steven Tyler of Aerosmith, so it seems music runs in the family.

We attended the 12/29/10 show at the New Jersey Performing Arts Center. Mike came through with the tickets as we had incredible, orchestra seats three rows from the stage which made recording it too easy. Did I say recording? Outside of the Grateful Dead, most acts won’t let recording devices near their performance. Tommy encourages it as he knows most of their press and promotion comes from fan uploads to YouTube. Tommy and his ragtag crew take this tour from city to city and perform with local orchestras. Most of the people in attendance that night were new to VGL, unlike the Beacon show, where most were repeat offenders. It was good to see that in a year’s time VGL had attracted a slew of new fans. 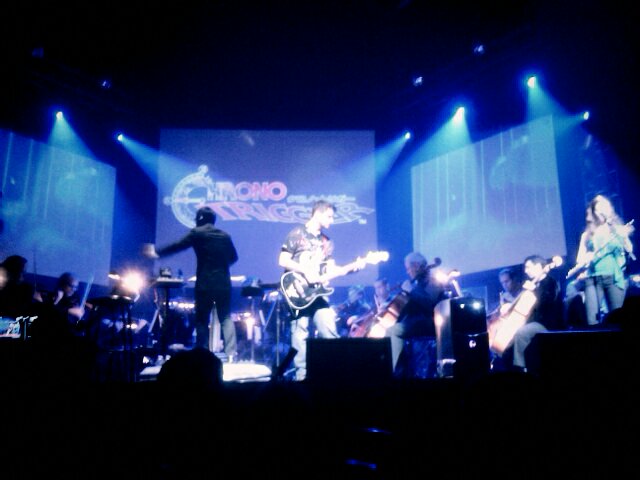 Seeming like a cross between a rock concert, planetarium laser show and video game tournament, VGL delivers the themes to some of our favorite old school and modern games. They open the show with a medley of classic game themes like Mario Bros., Tetris and Joust. Every show they try to introduce something new to keep it fresh. One of the new pieces they did this year was a live performance synced to the cut scenes from Assassin’s Creed: Brotherhood. The orchestra was led by Wataru Hokoyama, best known for scoring Resident Evil 5 and his baby, Afrika. Afrika, a game big in Japan where you play a photographer in the wild snapping shots of rare beasts in their natural environment, was one of the new pieces showcased at our performance. Shadow of The Colossus and Street Fighter were also new to the 2010/11 tour. Tron was a treat to see as it contained footage from the movies and games. RPG’s fill most of the show as they have some of the best music of any genre. Final Fantasy’s “One Winged Angel” is one of the most anticipated performances as well as World of Warcraft. Diablo III also made an appearance. Master Chief showed up during the Halo selection. Mega Man and Chrono Cross were represented as well. 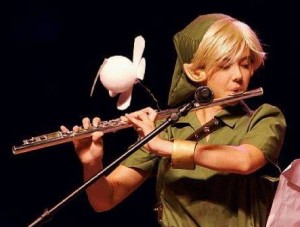 Tommy also introduces the audience to people he sees on YouTube. My first show introduced me to Martin Leung who played the Super Mario Bros. theme blindfolded and in double time. Also introduced at that show and appearing at this year’s show was Laura Intravia who dresses like Link from The Legend of Zelda and performs some of the game’s pieces on the flute. This year she also sang for the Assassin’s Creed performance and wrapped up the show with Tommy on “Still Alive” from Portal. The NJ show also featured Japanese composer Kinuyo Yamashita who performed some of her compositions from Castlevania. Mid-show we were entertained by an artist by the name of Brental Floss who gained notoriety on YouTube with parodies of popular game themes. 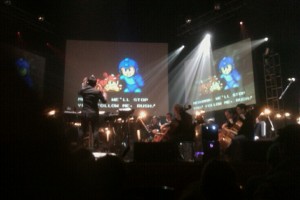 In between songs they played videos of videogame mash-ups from Gagfilms.com. For instance, there was Grand Theft Auto vs. Frogger. The Frogger screen pops up and all of a sudden a little guy comes out with a rocket launcher, blows up the traffic, jacks a car and speeds off the level. The best one I saw was Mortal Kombat vs. Donkey Kong. This mash-up would make even Billy Mitchell cry.

If you haven’t witnessed VGL in person yet, then you need to make plans to escape your game room and get out for the evening. It is a definite “Must See” for the hardcore gamer, casual gamer or just the regular Joe on the street that loves music. I’m looking forward to 2012 to continue my new tradition with my friend Mike as we venture into unknown territories to witness the magic of Video Games Live!

The Guardians of Mediocrity