During the mid 1990s, superhero comics were pretty awful. Don’t believe me? Let’s look at some of them…

Aquaman lost his hand, grew a beard and threw a shirts-off party.

Superman died, came back, wore a mullet and then did the Electric Slide.

The Justice League consisted of a brooding Booster Gold, Tribal Tattoo Guy Gardner and a host of forgettable superheroes. So much for the World’s Greatest Heroes, huh?

Meanwhile, at Avengers Mansion, Iron Man was a murdering, psychopathic traitor under the influence of Kang the Conqueror while Captain America’s Super Soldier Serum was killing the Star Spangled Avenger. Earth’s Mightiest Heroes were neither heroic nor mighty.

Aside from the occasional glimmer of hope, mainstream superhero comics wallowed in mediocrity. That all changed in 1997.

“Only nothing is impossible.”
– Grant Morrison

Grant Morrison was best known in the comic book field for his work on Animal Man, Doom Patrol and the subversive classic, The Invisibles. He wasn’t exactly the obvious choice to 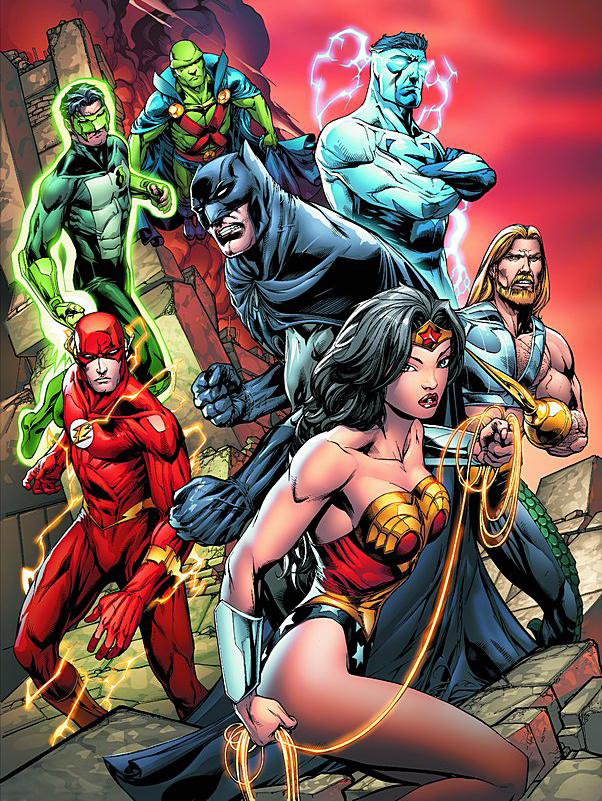 spearhead the rebirth of the world’s premiere super team, but DC Comics went with him anyway.

While they didn’t have the original line-up available (both the Silver Age Green Lantern and Flash were dead), Morrison and Porter still built their League around the “Magnificent Seven” of the DC Universe. The central line-up was Superman, Batman, Wonder Woman, Green Lantern (a new version of the character named Kyle Rayner whom Morrison masterfully characterized as the new guy), Flash (Wally West, the Silver Age Flash’s protege who came into his own in this run), Martian Manhunter and Aquaman. Other heroes joined the League including Steel, Orion, Big Barda, Plastic Man, Green Arrow and a lot more! This was a powerful team and they could only face the most dangerous of foes.

J.L.A. didn’t do anything small. Every story was massive, even mythological, in scope. The League fought super powered invaders from Mars, Gods, Angels, Demons, Star Conquerors, a Tyrant Sun from the 853rd Century and even the very concept of Armageddon itself. They were the World’s Greatest Heroes.

Grant Morrison and Howard Porter delivered a Justice League worthy not only of its history, but its future.

“I think it’s going to be a lot of fun. For those of you out there who like this sort of thing, at least.”
– Kurt Busiek on The Avengers

In 1998, Marvel Comics called on critically acclaimed scribe, Kurt Busiek and legendary artist George Perez to bring the Avengers back to their former glory. 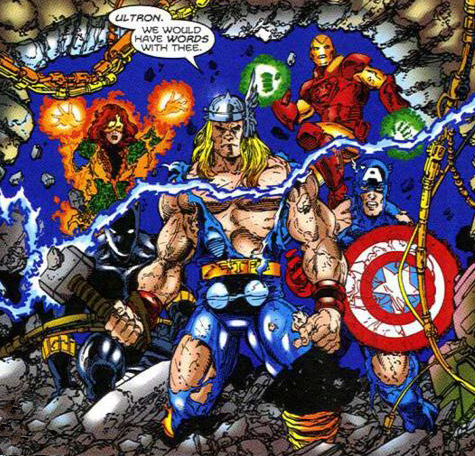 Kurt Busiek came to The Avengers after writing Marvels with Alex Ross, creating the Marvel villains masquerading as heroes comic, Thunderbolts and spearheading his acclaimed creator owned work, Astro City. He knew the history and he saw the future.

George Perez was already a legend in comics in 1998. He drew one of the most beloved runs of The Avengers in the 1980s after he cut his chops on the Distinguished Competition’s Justice League of America. To say fans were excited about his return to The Avengers was a bit of an understatement.

Mr. Busiek and Mr. Perez loved of these characters. The scripts drew on decades of history while remaining fresh and exciting. The pencils told a story of legends locked in battle with evil sentient robots, sinister cults and time traveling tyrants.

Busiek and Perez had the advantage of using the prime Avengers characters. Captain America was cured, Iron Man was back to his good and brilliant self and Thor… well Thor was Thor.

Drawing on the team’s rich history, strong characters and limitless world; Kurt Busiek and George Perez brought the team to the prominence it deserved. Once again, the Avengers were Earth’s Mightiest Heroes!

J.L.A. and The Avengers restored the honor of the mainstream monthly super hero comic book. Soon after, crime novelist Greg Rucka took over Detective Comics, rising star Geoff Johns started writing The Flash and acclaimed independent filmmaker Kevin Smith took the reigns of Daredevil. There was a renaissance coming, a renaissance led by the World’s Greatest and the Earth’s Mightiest.

Ian Vs. the 90s is a reoccurring column in which I take a look back at a very dark time in comic books – the 1990s – in search of the best that dire decade had to offer.

Like this piece? If so, I implore you to re-post it. Also, feel free to follow me @IanGonzales on Twitter. I promise not to ruin Dexter for you.

Bring on the Reboot!